Your Negro, My Macaca 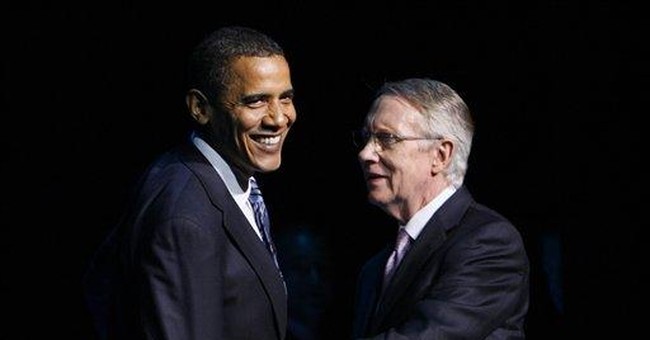 Welcome to America's longest running hit show -- the race farce, in which feigned shock and outrage lead to fawning apologies and bumbling explanations to all the wrong people. Taking offense has been reduced to low comedy in America -- as hypocrites play out their assigned parts.

S. Harry Reid was quoted in a new book as enthusing in 2008 about Obama's candidacy because he is "light-skinned" and speaks without a "Negro dialect, unless he wants one." Ruth Marcus of the Washington Post called it "beyond stupid" to use the word Negro in 2008. Liz Cheney labeled Reid's words "fairly racist." And Republican National Committee Chairman Michael Steele opened up to full throttle, calling on Reid to step down as majority leader.

Reid understood his part in the drama. He apologized to the president and to "any and all Americans, especially African-Americans, for my improper comments." The majority leader then made personal calls to a number of African-Americans who could, he hoped, offer remission of sins. Among these were reportedly Eleanor Holmes Norton, Donna Brazile, and ... Al Sharpton.

Actually, if you read between the lines, it doesn't look as though Reid phoned Sharpton but the other way around. The figure who became an American celebrity by attempting to frame innocent men for an invented racial attack, Sharpton issued a statement of forgiveness after noting that he and the leader had spoken. No Democrat in Harry Reid's position would dare to refuse a call from Sharpton under these circumstances. Thus does Sharpton burnish his reputation as the "go to" guy for racial absolution. Deft.

Some Reid defenders have been at pains to point out that Reid was supporting Obama's candidacy and that his words should be understood in that context. This is the part in the play when Democrats' sins are washed clean because they favor the minimum wage, health care reform, and card check. As Norton put it, Reid gets a pass because he "has earned it with long support of civil rights and … issues that matter most to African-Americans." President Obama applied the same standard, accepting Reid's apology because he has shown "passionate leadership … on matters of social justice" and because the president "know(s) what's in Harry's heart."

With due respect to the Republicans who simply could not help themselves in the face of this big fat opportunity to play turnabout, this is not seemly. It's true and glaringly obvious that the Democrats have honed this hair-trigger race sensitivity into a political tool that shoots only right not left. It's so true that no one gave Trent Lott the benefit of the doubt about what was in his heart when he said something boneheaded in praise of the 100-year-old Strom Thurmond. It's true that one word, "macaca," that no one had ever heard of before (and may or may not have had racial connotations), was enough to sink Republican Sen. George Allen. And it's true that countless honorable conservatives have been unjustly smeared as racists because they disapprove of affirmative action or oppose the teachers' unions.

But let's not get into this smarmy business.

Reid used the word "Negro." It's out of date, but is it now offensive? Is it the new "N" word? Just a blink of an eye ago, "black" was the preferred locution. Jesse Jackson decided it should be "African-American" and the country went along. But the slower adopters (even your humble columnist, who prefers less orotund expressions) sometimes still say "black." How long until that becomes a sin?

As for Obama being light-skinned, it's certainly possible that his complexion made him more acceptable to some vestigial racists. For Reid to notice that is not to endorse it. And finally, the president's lack of a "Negro dialect, unless he wants one," was clearly an important asset. Most Americans expect their president to speak standard English. Black (there I go again) speech in America ranges from James Earl Jones to gangsta rap, and it was clearly an advantage that Obama was articulate. When he chooses to adopt a black style, he does it a whole lot more authentically than Hillary Clinton managed in her embarrassing South Carolina appearance at a black (did it again) church. Remember "I ain't noways tired"?

Republicans are right, so right, that if Mitch McConnell had said what Reid said, there would be a prolonged scandal. And they are right that political differences should not be turned radioactive by the malicious charge of racism. But it's enough to point this out.