Why Won't We Face Iran's Evil? 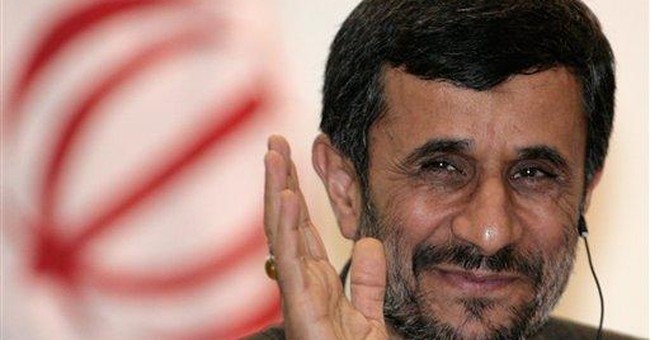 When tens of thousands of Iranians took to the streets last spring and braved the most brutal repression the regime could inflict, Michael Ledeen was the least surprised man in Washington. In season and out, Ledeen has chronicled the profound weakness of the mullahocracy and its deep unpopularity with the Iranian people. Impatiently, year after year, he has identified opportunities for the United States to help the people of Iran replace their sinister and menacing rulers. After each new post on the subject, Ledeen signed off with "Faster please."

In "Accomplice to Evil," Ledeen seems almost out of patience. The failure to grapple with the challenge of Iran is more than a strategic failure, he argues; it's a moral failure. Just as few in the democratic countries took Adolf Hitler at his word when he repeatedly promised to dominate the world and kill all the Jews, and few could squarely acknowledge the genocidal lengths to which the communists would go, so today the threat from the radical Islamists is minimized, whitewashed, or wished away.

Of the Carter administration, Ledeen writes, "The failure to comprehend what Khomeini was all about contributed mightily to the American debacle in Iran, and to subsequent failure of American policy, for the policy makers -- from Carter down -- did not take seriously the possibility that Khomeini might be worse than the shah." Incomparably worse as it turned out. During the war with Iraq, Iran sent tens of thousands of children to their deaths "clearing" minefields. Before departure, they were issued plastic keys -- to open the gates of paradise.

But Americans have doggedly refused to recognize the nature of the regime or the Islamist movement it spearheads. Ledeen writes of the Carter State Department: "In what was to become a great leitmotif of the next 30 years, American diplomats desperately worked for an agreement at all costs." When the Iranians presented brutal demands that the U.S. turn over all Iranian "criminals" who had taken refuge in America, an assistant secretary of state -- in words that could have been ghostwritten by the current occupant of the Oval Office -- explained "... the Iranian suspicions of us were only natural in the post-revolutionary situation ... but after a transition period common interests could provide a basis for future cooperation."

Even after the regime had held our diplomats hostage in Iran for more than a year, the Carter administration "approved a series of humiliating concessions" in the hope of securing their release. It was that way to the bitter end. On the day before he left office, Carter issued Executive Order 12283, which immunized the Iranian government from lawsuits arising from the seizure of the embassy.

President Obama deludes himself that "outreach" to the mullahs represents some sort of new departure in American policy. In fact, every administration since Carter's has repeatedly attempted to "engage" the mullahs. Even the Bush administration "pursued accommodation ... as vigorously as any of the others." From pages 155 to 159, Ledeen lists the scores of publicly reported meetings between top Iranian and U.S. officials in just the seven years between 2001 and 2008. One example gives the flavor: On Nov. 17, 2003, Secretary of State Colin Powell praised the efforts of "my three colleagues, the EU three, (who) played a very, very helpful role in going to Tehran ... and coming back with a very, very, positive and productive result."

It was nothing of the kind. But that didn't prevent the Bush administration from continuing to lower its bucket into this dry well. The Obama administration, seasoning its approach with fawning genuflections, is taking accommodation to a new level -- a fact that is not lost on the Iranian people who chant "Obama. Obama. Either you're with us or you're with them" as they dodge the batons and bullets of the Basij militia.

Ledeen's advice is to offer strong moral support to the Iranian people. Reagan's open advocacy for the dissidents in the Soviet empire gave them courage and hope. He would also supply reliable news about what is happening in Iran through every available outlet. The Iranians are huge consumers of Internet news (Farsi is the fourth most common language online), but they need cell phones, satellite phones, laptops, servers, and BlackBerrys. Every successful revolution, Ledeen reminds us, "including ours," required outside assistance. Third, he would destroy the assembly sites for the weapons Iran is providing to the Taliban, Mahdi Army, and al-Qaida.

Defeating those he has elsewhere called the "terror masters" in Tehran would drive a stake through the heart of radical Islam. "The defeat of the principal sponsor sends shock waves through the movement and discredits the ideology." But only if we can overcome our self-delusions about the enemy first. Faster please.