Democrats May Regret 'Pass Anything' Strategy 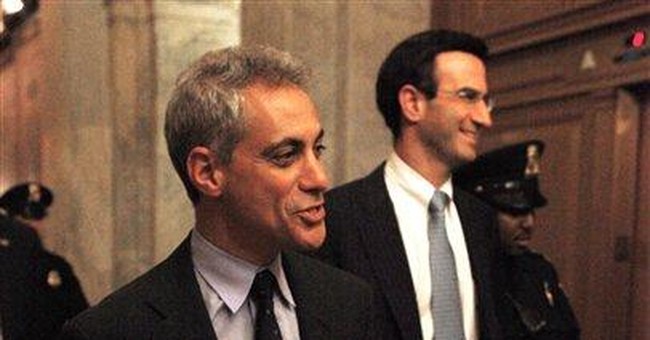 Former President Bill Clinton visited Capitol Hill recently to deliver a pep talk to Senate Democrats. "It's not important to be perfect here. It's important to act, to move, to start the ball rolling," he reportedly told senators. White House Chief of Staff Rahm Emanuel sounded a similar theme in an interview with the New York Times. "I'm sure there are a lot of people sitting in the shade at the Aspen Institute ... who will tell you what the ideal plan is. Great, fascinating. You have the art of the possible measured against the ideal."

So the strategy on crafting sweeping legislation that will profoundly alter one-sixth of the U.S. economy in the midst of the worst recession in 20 years is: Don't stress about the fine print. Just pass something!

This is the momentum theory of government. Governing is like campaigning: Keep the bandwagon rolling along and the voters will follow in the slipstream. Fail to do this, Bill Clinton warned, and Democrats may suffer the same fate in the 2010 elections that they did in 1994, after HillaryCare went down to defeat.

The former president is an acclaimed tactician and he may be right. But so many of his assumptions -- and those of the Obama administration for whom he was speaking -- are dubious.

In the first place, it isn't at all clear that Democrats lost in 1994 because they failed to pass health reform. A better explanation of the 1994 result was that voters were spooked by the attempted federalization of health care and expressed their displeasure by voting Republican. Certainly the subsequent retooling by the Clinton administration -- agreeing that the "era of big government (was) over" and focusing on small matters like curfews and school uniforms -- suggests that Clinton himself believed the health care reform was an overreach.

The Democrats also seem confident that -- no matter how sloppy or unseemly the process of getting to passage may be -- voters will be pleased with health care reform after it becomes law.

This, too, is a leap of faith. It requires a stubborn indifference to the steadily accumulating polling data showing that voters -- particularly the all-important independents -- are souring on health reform and are worried about overspending in Washington. An Ipsos/McClatchey poll in early November found that 49 percent of respondents oppose the health care reforms being considered in Congress while only 39 percent approve. In October, the numbers were 42 disapprove, 40 approve. Among independents, the number disapproving of health reform jumped from 38 percent to 53 percent. An October CNN poll found the approve/disapprove at 49/49. In November, disapproval took the lead with 53/45.

In the immediate afterglow of President Obama's inauguration, a bare majority (51 percent) of Americans believed that "government should do more to solve problems and help meet the needs of people." That seems to have been the high water mark. By late October, only 46 percent agreed. More ominously for Democrats, the liberal Brookings Institution published a survey showing that 53 percent of Americans worry that if government gets more involved in health care delivery, it will make matters worse. A Bloomberg poll found that fully 62 percent would be willing to risk lengthening the recession rather than to further increase the national deficit.

As for whether the voters will thank the Democrats if they succeed in ramming through a bill (Harry Reid is reportedly considering the reconciliation strategy in the Senate that would require only 51 votes), recent history should give them pause.

In 1988, with the support of the AARP, the House passed the Medicare Catastrophic Coverage Act by a vote of 328 to 72. A year later, Rep. Dan Rostenkowski, chairman of the Ways and Means Committee, had to literally flee an angry crowd of unhappy constituents wielding placards bearing slogans like "Don't Tax the Seniors." The law was repealed 16 months after passage by a vote of 360 to 66.