Are You with Us or with Them? 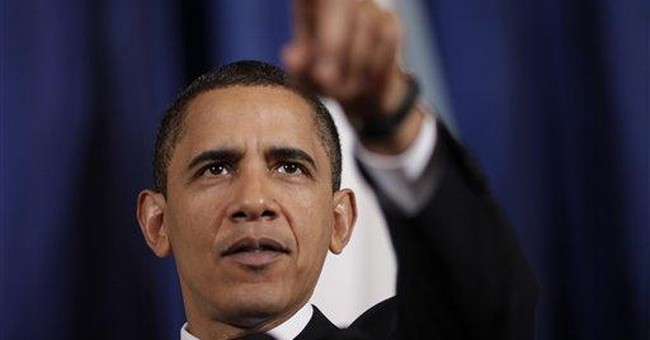 President Obama likes to preen himself on his supposed moral superiority to his predecessor. He announced the closing of Guantanamo in his first week on the job (though 10 months on, it remains open) to advertise the new administration's disdain for George Bush's war-fighting tactics. And at every opportunity since, he has stressed that his policies -- on taxes, on the Middle East, on health care, on "man-caused disasters," and on "climate change" -- reflect a more refined and elevated morality than has ever before held sway in Washington, DC.

So you have to wonder how the president slept last Wednesday night.

He has known that critics in the United States regarded his posture toward the Iranian regime as weak. But on Wednesday, he heard this critique from a different quarter -- one that will be more difficult to dismiss.

Every year, on Nov. 4, the anniversary of the day in 1979 when Iranian thugs took American diplomats hostage in Tehran, the government has organized a street demonstration outside the former American embassy. In the early days, the rallies may have engaged a certain number of spontaneous participants, but they have long since become utterly stage-managed government shows. The only people the regime could muster this year to chant "Death to America! Death to Israel!" were non-Iranian members of Hezbollah and students bused in from the provinces for the purpose.

But that wasn't the only demonstration in Tehran that day. Displaying awe-inspiring courage in light of the brutal tactics (including murder) the regime has used to quell opposition, tens of thousands of Iranians took to the streets again. Instead of "Death to America," they shouted "Death to the Dictator" referring to Ahmadinejad. And they trampled on photos of Supreme Leader Ayatollah Ali Khameini. Michael Ledeen, of the Foundation for the Defense of Democracies, reports that demonstrations also erupted in Shiraz, Isfahan, Kermanshah, Zahedan, Arak, Mazandaran, Tabriz, and Rasht. As before, the regime used paramilitary goons on motorcycles to beat, teargas, and bludgeon protestors. And again the regime disrupted cell phone service, text messaging, and the Internet to prevent demonstrators from coordinating their activities.

But this is what should awaken Obama's conscience: The protestors chanted something new this time. As they dodged the blows of the militia, they chorused: "Obama! Obama! Either you're with them or you're with us."

This exquisitely moral White House was unmoved. Incredibly, President Obama released a statement that very day commemorating (!) the 30-year anniversary of the kidnapping of America's diplomats, taking the opportunity once again to abase himself and us. "Thirty years ago today," the president recalled, "the American embassy was seized" -- he did not say by whom. But because some anonymous agent seized the embassy, it "set the United States and Iran on a path of sustained suspicion, mistrust, and confrontation" that Obama is determined to reverse. He wants to move beyond the past and seek "a relationship with the Islamic Republic of Iran based upon mutual interests and mutual respect."

By ostentatiously using the term "Islamic Republic" Obama tips his hand. He could have expressed his hopes for good relations with the people of Iran. That would have left the door open to a new Iranian regime that might not be politically Islamic. Instead he has signaled his eagerness to placate and yes, appease, the current malevolent Iranian leaders. "We do not interfere in Iran's internal affairs" he assured them. Asked about the demonstrations flaring around Iran, the president's spokesman Robert Gibbs hoped that "the violence will not spread," which sounds like something you'd say about rioters. In Iran, the violence is coming exclusively from the government, which is firing upon unarmed demonstrators.

Though the Obama administration has tripled the deficit in just 10 months in office, it has found one program to cut -- the $3 million to support the Iran Human Rights Documentation Center. The tiny research organization, which kept records of the disappearances, murders, and other human rights abuses in Iran, was abruptly defunded last month, sending a clear message of contempt to the Iranians who are putting their lives on the line to resist this vicious regime.

A successful overthrow of the nearly nuclear mullahs in Iran would be the greatest boon to world peace and stability since the fall of the Berlin Wall. After this week's events, it can no longer be said that the Obama administration isn't doing enough to support the opposition. The people on Tehran's streets know the truth -- he's effectively supporting the regime.