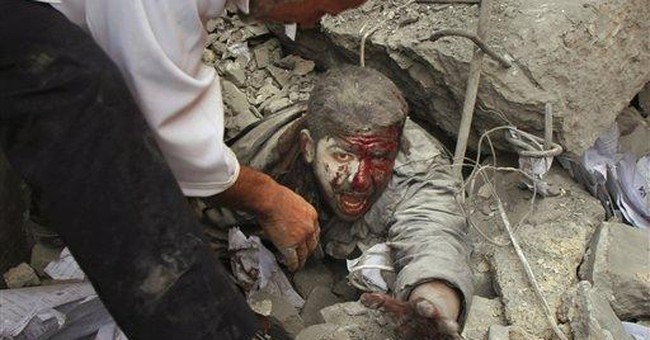 The war over the war in Gaza is heating up. Next week, the United Nations General Assembly will consider the tendentious Goldstone Report, the highest profile exercise in blaming the victim in the U.N.'s tawdry history. Simultaneously, lawyers in Britain, the Netherlands, Spain, Belgium, and Norway are drawing up criminal indictments against IDF officers who participated in the Gaza operation. The Israeli newspaper Haaretz reports that a number of names are on a police watch list for arrest and detention should they attempt to enter Britain.

Israel's enemies certainly seek to terrorize and demoralize Israel. But the more important campaign -- which is gaining traction -- is to delegitimize her and to brand Israel's self-defense as a war crime.

Because the United States has not yet descended to that level of moral inversion, I was able to sit down yesterday with Col. Ben Gruber, deputy commander of the armored division of the IDF, and one of the officers who participated in the Gaza campaign. Like 80 percent of the IDF, Gruber is a reservist. In civilian life, he's a computer scientist and father of five.

Soft-spoken and reflective, Gruber tries to think the best of everyone -- even Richard Goldstone. "He could not have read" this report before attaching his name to it, Gruber sighs. Readily acknowledging that mistakes are always made in war, and that those who intentionally transgress deserve punishment, Gruber is dumbfounded that the Goldstone report accuses Israel of "deliberately" targeting civilians.

Consider the assessment of Col. Richard Kemp, former commander of British forces in Afghanistan, and a veteran of the Gulf War and the conflicts in Northern Ireland, Bosnia, and Macedonia. "During Operation Cast Lead, the IDF did more to safeguard the rights of civilians in a combat zone than any other army in the history of warfare. Israel did so while facing an enemy that deliberately positioned its military capability behind the human shield of the civilian population."

What army has offered 48 hours notice to its enemies of planned operations? Israel did so, dropping 2 million leaflets in advance of army movements. Twenty-four hours before the IDF moved on a suspected terrorist site, the army phoned civilians to warn them to evacuate. There were 100,000 calls. And five minutes before an operation began, the IDF sent out text messages. The calls and messages contained not just warnings, but instructions on which roads were safe to take and which schools or other buildings could be used for shelter. In the midst of the conflict, hundreds of trucks brought food, water, and medical supplies to Gaza.

In Rafa, Israel sought to close 225 tunnels (with 800 entrances) used to smuggle arms to Gaza from Egypt. The easiest and safest course for the IDF would have been to level the homes without warning that contained the entrances using air power or tanks. In Gaza City, to avoid civilian casualties, IDF infantrymen went house to house, encountering booby traps along the way and fending off seven attempted kidnappings.

Hamas was so confident that Israel would not knowingly shoot at civilians that they hid behind human shields throughout the short war. It was common, when word came of an impending attack, for Hamas to send children out to play in the streets at that moment. "Will I shoot?" Gruber asks. "I will not." There is video of a terrorist with a rocket launcher slung over his shoulder grabbing a 10-year-old boy by the collar and dragging him across the street to deter Israeli snipers. And it worked. Israel has similar video (from Reuters actually) showing U.N. ambulances ferrying armed men. "Yes," says Gruber with resignation, "the 'ambulances' were always at the front."

There are scores of other examples -- Hamas firing from mosques, schools, private homes, and hospitals. The very fact that Hamas used human shields betrays their admission that Israel abides by ethical standards in war fighting. They took advantage of Israel's moral qualms about harming non-combatants. Now they accuse Israel of the crimes they themselves committed -- deliberately targeting civilians by raining down 12,000 missiles on southern Israel since the Israeli withdrawal from Gaza.

Gruber grudgingly accepts the moral asymmetry. "I will not shoot a civilian for his sake, but also for the sake of my soul," he explains. The more intolerable injustice is the world's embrace of the lies and calumnies now peddled by the same people who sent those kids into the streets in a war zone.