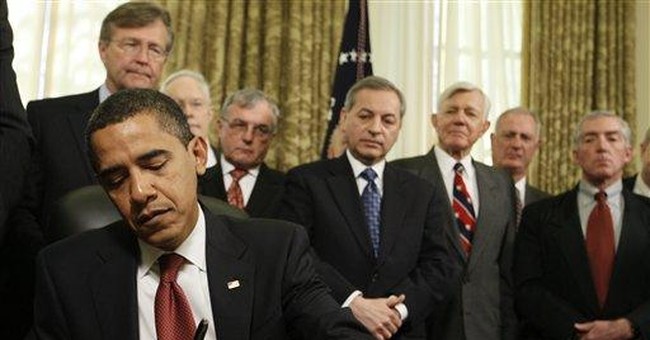 This is something to tell your children: Don't be afraid of making a mistake. Everyone makes mistakes. Two of the smartest men in America -- the Chief Justice of the United States and the President of the United States -- flubbed the one-sentence oath of office. Obama seemed to jump in too quickly repeating the first words of the oath and Roberts then got the next words out of order. Oh, well. The world continued to spin on its axis. The speech was delivered. The parade went forward.

But just to be on the safe side, constitutionally speaking (the document does specify that all presidents will take the oath), Roberts and Obama repeated it correctly the next day so no one could say there was any cloud on the legitimacy of the Obama presidency. One can only wish that this punctiliousness about strict adherence to the words of the Constitution were more often observed by liberals, who like to say that it's a "living document" with malleable meanings.

There were things for conservatives to like in Obama's address. Few have noticed, for example, that he clearly disavowed plans to reinstitute the Fairness Doctrine. He proclaimed that those who hold on to power through "silencing dissent" were on "the wrong side of history." That's a relief. And there was a coded message for conservatives in his call for the nation to "pick ourselves up, dust ourselves off and begin again " Those were almost exactly the lyrics of a song from the 1936 musical "Swing Time," and they were sung by Ginger Rogers, a noted Republican. When you add that to the fact that Obama has kept on Robert Gates, you've got real common ground.

More seriously, considering his record and past associations, Obama might have delivered a far more divisive and incendiary address. Certainly the crowd on the Mall would have loved it if he had. But just as his appointments have reflected an intent to govern more from the center than from the left, his speech was somewhat conservative in spirit. He repeatedly invoked "our ancestors" and those who sacrificed so much to secure our way of life. That's a conservative impulse. Conservatives look to the past for inspiration. Liberals are always fixed on the possibilities of the future.

Not to say that Obama is anything but a liberal. Still, he honored the military -- even if he sometimes left ideas dangling. Example: "As we consider the road that unfolds before us, we remember with humble gratitude those brave Americans who, at this very hour, patrol far-off deserts and distant mountains. They have something to tell us, just as the fallen heroes who lie in Arlington whisper through the ages." What do they have to tell us? What are the dead of Arlington whispering? We never find out. The next sentence just explains that they deserve our respect because they "embody the spirit of service." Well, that was flat. The structure of the paragraph cried out for something stirring, like "They are telling us that never in the long history of mankind has a nation so merited the love and sacrifices of her sons and daughters."

Naturally, the parts of the speech the commentators seemed to like the most were actually hackneyed political evergreens. "We will restore science to its rightful place" -- who moved it? -- "and wield technology's wonders to raise health care's quality and lower its costs." Aren't we supposed to be "putting away childish" ideas like getting something for nothing? Besides, our health care system is heavily technologically weighted compared with others -- that's one of the reasons it's so expensive. Obama's pet project of digitalizing medical records seems like a sensible idea. But it would be expensive ($75 billion to $100 billion) and there are privacy concerns. Maybe it would save money, but surely not enough, not nearly enough, to make a significant dent in our huge health care spending.

Obama's call to reject "worn-out dogmas" and "petty grievances" was greeted as transformational. The issue, he said, is not whether we have big government or small government but whether government works. Isn't this warmed-over Michael Dukakis? He told us in 1988 that the issue was "competence, not ideology." Obama then offered that when his administration finds that government is not helping people to find decent jobs, good care, and a dignified retirement, "programs will end." Now that's the audacity of hope! As Reagan reminded us, the closest thing to eternal life here on earth is a federal program.

Obama has never actually offered anything that was new -- except himself. And nothing in his inaugural address clarified where this fresh personality wants to take the country.