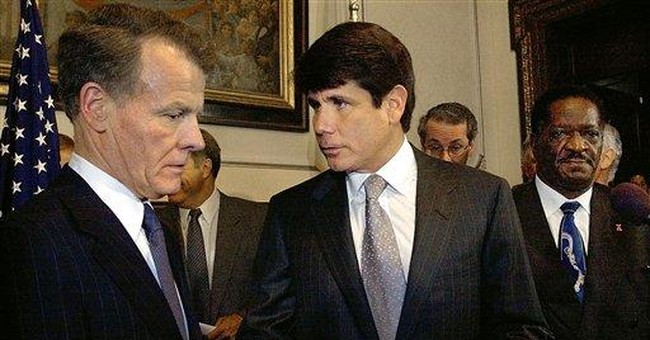 The response of Kathryn Jean Lopez (National Review Online) to the arrest of Rod Blagojevich was priceless. "Finally, a political scandal you can talk to your children about. No room at the Mayflower. No myspace page. No Gay-American announcement. Just good and evil and money and power corrupting." Rod Blagojevich is part of a storied American tradition. By selling government posts, shaking down businesses that had dealings with the state, and maneuvering to get lucrative jobs for his wife and himself, Blagojevich was practicing "honest graft."

The distinction between "honest graft" and "dishonest graft" was elucidated by a turn of the century politico named George Washington Plunkitt, a Tammany Hall man. Tammany was the political machine that ran New York, which was then a lot like Illinois is today. "Everybody is talkin' these days about Tammany men growin' rich on graft, but nobody thinks of drawin' the distinction between honest graft and dishonest graft Yes, many of our men have grown rich in politics I've made a big fortune out of the game but I've not gone in for dishonest graft -- blackmailin' gamblers, saloon-keepers, disorderly people, etc."

No, he explained, here's how "honest graft" works: "Well, I'm tipped off, say, that they're going to lay out a new park at a certain place. I see my opportunity and I take it. I go to that place and I buy up all the land I can in the neighborhood. Then the board of this or that makes its plan public, and there is a rush to get my land, which nobody cared particular for before. Ain't it perfectly honest to charge a good price and make a profit on my investment and foresight? Well, that's honest graft."

That was how things were managed in the early 1900s. How is it done today? Gov. Blagojevich, who had authority to appoint a successor to the U.S. Senate seat vacated by Barack Obama, instructs his aide that "The trick is how do you conduct indirectly a negotiation?" Actually, on the evidence of these secretly taped conversations, Blagojevich was anything but indirect. "We were approached 'pay to play,'" he told an aide on Dec. 4, "That, you know, he'd raise me 500 grand. An emissary came. Then the other guy would raise a million if I made (Candidate 5) a senator."

Seeing himself in possession of a valuable commodity, Blagojevich wasn't about to give it away for mere gratitude. "It's not coming for free. I've got this thing and it's (expletive) golden, and, uh, uh, I'm just not giving it up for (expletive) nothing. I'm not gonna do it." Then, demonstrating a fine appreciation for his legal authority, he added, "I can always use it. I can parachute me there." At another point, he was subtlety itself: "I want to make money."

No doubt he was inspired by the example of his wife, who is heard demanding in the background of one call regarding the Chicago Cubs, that her husband should "hold up that (expletive) Cubs (expletive) (expletive) them." He liked her advice well enough to ask the aide what he thought of it. Not a shock from a guy who could demand a $50,000 campaign contribution from the director of a children's hospital before releasing $8 million in state funds for the kids.

Plunkitt had some other reflections on public service. He noted that "What tells in holdin' your grip on your district is to go right down among the poor families and help them in the different ways they need help If there's a fire in Ninth, Tenth, or Eleventh Avenue, for example, any hour of the day or night, I'm usually there with some of my election district captains as soon as the fire engines. If a family is burned out I don't ask whether they are Republicans or Democrats, and I don't refer them to the Charity Organization Society I just get quarters for them, buy clothes for them and fix them up till they get things runnin' again. It's philanthropy, but it's politics, too Who can tell how many votes one of these fires bring me? The poor are the most grateful people in the world, and, let me tell you, they have more friends in their neighborhoods than the rich have in theirs."