Pinch Me, Am I Dreaming? 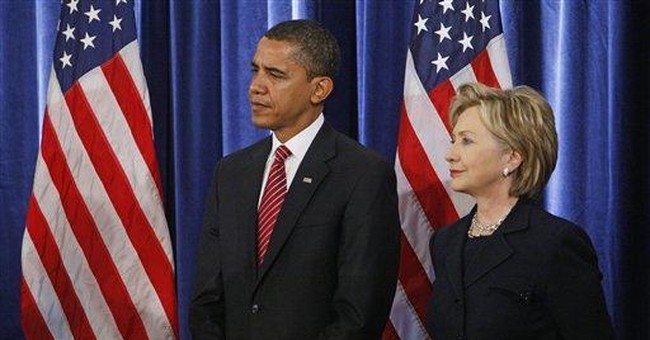 Superstition almost forbids me to comment on President-elect Obama's appointments thus far. The news has been so shockingly welcome that I'm almost afraid to remark on it for fear of breaking the spell.

Such reticence has not afflicted everyone on the right, though. Here's Max Boot, conservative editorialist, author, and military historian: "I am gobsmacked by these appointments, most of which could just as easily have come from a President McCain..." Sen. Mitch McConnell, the Senate minority leader, declared that the Obama administration was "off to a good start." And New York Times columnist David Brooks has acknowledged that he is "tremendously impressed."

If I were a left-winger, I'd be tearing out my hair about now.

The economic team of Lawrence Summers, Timothy Geithner, and Christina Romer does not exactly send a "to the ramparts" message. Summers, treasury secretary under Bill Clinton, is known for his belief in free financial markets, free trade, and fiscal discipline. He got into terrific trouble as president of Harvard for implying that, on average, men are more mathematically talented than women (which is true but that is irrelevant in the Ivy League). They made him grovel for that one, and to his shame, he did. The whole scene at Harvard, I gather from Stephan Thernstrom, who was there, was like something out of China's Cultural Revolution where the mob makes the professor confess error and beg for punishment. Still, if you want a centrist, Summers is your man.

Geithner is a Summers protege. As president of the New York Federal Reserve Bank he has been knee-deep in bailouts over the past three months. But that datum doesn't distinguish him from the Bush administration or anyone else in the mainstream of America's economic elite.

If the economic team is centrist, the foreign policy team (and I pinch myself as I say this) leans a little to the right. Did you notice that in introducing his choices, the President-elect used the term "defeat our enemies"?

Gen. James Jones, Obama's choice for national security adviser, is a four-star Marine general who was commandant of the Marine Corps and Supreme Allied Commander for Europe (SACEUR), among other posts. Response to his nomination among conservatives ranged from cautious optimism to outright enthusiasm. "He is a thoroughly decent man" one conservative foreign policy analyst told me. Though his political views are not known, he has received the "Keeper of the Flame" award from the hard-line Center for Security Policy. The Foundation for the Defense of Democracy's (and National Review's) Michael Ledeen, no coddler of wimps, calls him "almost unbearably delightful" in the two or three conversations they've had. Everyone seems to agree that he has high intelligence and deep patriotism. If there is a hesitation, it arises from the fact that he is, like Colin Powell and Brent Scowcroft, a political general, and those have not always worked out so well.

As for Hillary Clinton, well, she is no Jeane Kirkpatrick. While it's true that she declined to apologize for her vote in favor of the Iraq war, she did everything but. It was only last year that she told Gen. Petraeus that his report on progress in Iraq "require(ed) a willing suspension of disbelief." She opposed the surge of troops in Iraq but then -- this is chutzpah! -- attempted to take credit for its success. On Meet the Press in January 2008 she said "...The point of the surge was to quickly move the Iraqi government and Iraqi people. That is only now beginning to happen, and I believe in large measure because the Iraqi government, they watch us, they listen to us. I know very well that they follow everything that I say. And my commitment to begin withdrawing our troops in January of 2009 is a big factor, as it is with Sen. Obama, Sen. Edwards, those of us on the Democratic side. It is a big factor in pushing the Iraqi government to finally do what they should have been doing all along."

She has criticized what she calls the Bush administration's "obsessive" focus on "expensive and unproven missile defense technology." On trade, she has made protectionist noises. On the other hand, she is not Carl Levin or Dennis Kucinich or Anthony Lake or Samantha Power. And that, along with the other appointments, is enough to keep some of us smiling at a time when we were expecting to be in deep anguish.