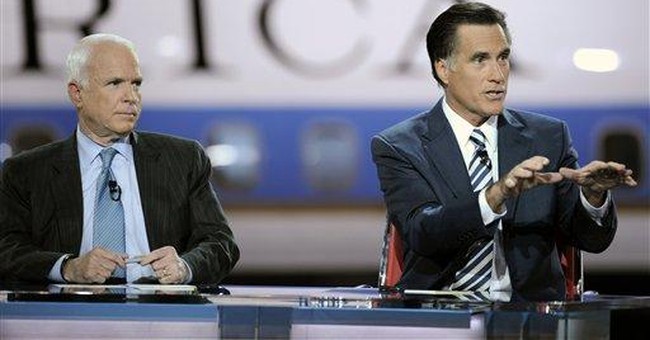 Usually the guy who's ahead finds it within himself to be gracious to his competitors whereas the desperate runner-up goes negative and reaches for any stick. So it was peculiar to watch John McCain sneering and slicing his way through the debate with Mitt Romney at the Reagan Library. When McCain was given up for dead last summer, he was witty and fun on the stump. Now that he is the front-runner, he is snarky and obnoxious. Dr. Freud, call your office.

They say that McCain harbors a particular dislike for Romney. And why would that be? Well, Romney is pretty much the only candidate in the race who has had the temerity (aka cash) to run ads criticizing McCain. The senator from Arizona has some fine qualities, but no one has ever suggested that enduring criticism manfully is one of them. He tried his best to make such effrontery illegal with the McCain/Feingold campaign finance law. Romney found a loophole and McCain is irritated.

McCain lashed out at Romney for supposedly endorsing "timetables" for withdrawal from Iraq last year, saying that Romney, like Hillary Clinton, wanted to "wave the white flag" and "Timetables was [sic] the buzzword for those that [sic] wanted to get out." The two tangled over this question for many rounds during the debate. After vigorously denying the lie, Romney, ever the gentleman, injected a note of graciousness by saying, "He's a fine man and a man I respect, and I particularly respect his service in the military and his integrity and courage for our nation."

A few moments later, the audience no doubt leaned forward in their seats, waiting for a correspondingly polite compliment from McCain about Romney and instead heard, "Oh, I'm sure that, as I say, he's a fine man. And I think he managed companies, and he bought, and he sold, and sometimes people lost their jobs." Sucker punch.

Well, say McCain enthusiasts, the senator is simply offended by those who lack the courage of their convictions. Remember his snide dig at Romney ("Oh you're the candidate of change all right")? There are two answers to that. In the first place, only a willful misreading of Romney's timetable comment could yield the interpretation McCain ascribed to it. Second, Senator Unswerving himself had unambiguously talked of changing course in Iraq in January of 2007.

Ed Morrissey of The Captain's Quarters blog reports that McCain spoke of benchmarks in a newspaper interview a year ago. "McCain said Thursday that he hadn't yet decided on precise benchmarks. They'd have to be specific, and they (Iraqi government officials) would have to meet them,' he said. Asked what penalty would be imposed if Iraq failed to meet his benchmarks, he said: I think everybody knows the consequences. Haven't met the benchmarks? Obviously, then, we're not able to complete the mission. Then you have to examine your options.'"

"I don't change my positions depending on what year it is or what office I'm seeking" McCain has boasted. Yet in the California debate, he was forced to admit that he no longer supports the immigration legislation he himself proposed last year.

He was asked, would you vote for the bill if it came to the floor? "No, it [the bill] would not, because we know what the situation is today. The people want the border secured first." Oh. So McCain has (whisper) changed his position? While we're on the subject of political flexibility, let's recall that McCain voted against the Bush tax cuts (thought they were too nice to the rich) but now wishes to make them permanent.

It's no crime to change one's views, of course, and it would certainly be welcome if McCain were to reexamine a few more of his positions; for example, on detainee interrogations, drug reimportation from Canada, or suitable Supreme Court picks (he confided that he found Alito too conservative). And he could stand a little refresher course on Economics 101, particularly the part about where the wealth of this nation comes from. (Hint: Not from senators.) But his own flip-flops leave him with a huge H (for hypocrite) on his forehead when he singes Romney for opportunism.

McCain's phosphorescent patriotism is his most appealing trait. But in the past few weeks, as he has been winning, his love of country has been riding in tandem with a signally unattractive love of self.