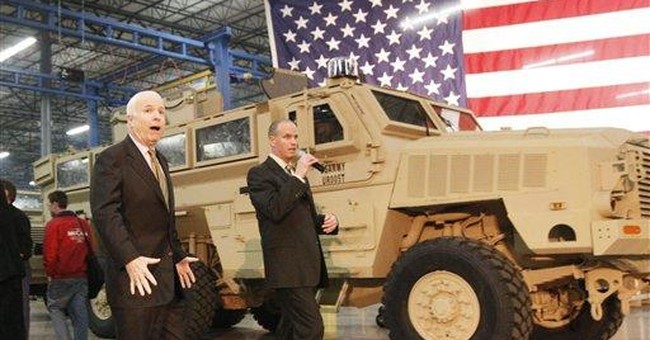 Before you completely disregard my letter because I’m one of those annoying conservative radio talk show hosts, I hope you’ll consider the fact that over the past few weeks, I’ve been getting a ton of flak for supporting your expected candidacy.

I have to admit that you weren’t my first choice. Fred Thompson was my pick as I felt he best embodied the type of Republican best suited to run our country during these challenging times.

But as a Republican, supporting you now is a remarkably easy task. The two simple reasons for defending you are: 1) Barack Obama and 2) Hillary Clinton. Despite what Ann Coulter says, handing over the keys to the White House to a liberal Democrat would be a disaster.

So I’ve been doing my best to remind my radio audience about the importance of future Supreme Court justices, how solid you’d be in trying to keep our country as safe as possible against the threat of Islamic terrorists, the ongoing need to preserve and protect the sanctity of life, the crucial defense of the right to keep and bear arms, and all the other reasons why a Republican – any Republican – would be more preferable to the Democrats.

And you know what? I sensed that I was persuading the cynics. I know you have a spotty track record on the subject of illegal immigration, but you keep saying that you’re hearing the American people now and you absolutely understand the need to secure the border. I realize that campaign finance reform is a sore spot for many, but practically speaking, that’s only a life or death issue to mostly inside-the-beltway-ers.

I could hear it in my callers. Even the most ardent McCain-basher was starting to come around. Person after person called to tell me that I was convincing them of the importance of keeping Obama or Clinton out of the Oval Office.

And then along came Cincinnati.

Bill Cunningham is an Ohio institution. The veteran conservative radio host has influenced and entertained listeners like me for years. And when I saw that he was slated to introduce you at a Cincinnati rally, I thought that was quite an achievement for your campaign. After all, Willie is a red meat conservative, the type of guy who hasn’t been exactly brimming with excitement over your success.

As we all know by now, he got up on stage and railed against the Democrats. He did what he does on the radio. He complained about the media’s love affair with liberal politicians and he referred to Sen. Obama by his full name.

So Sen. McCain, I’ve gotta ask: whose bright idea was it for you to run to the microphones and cameras afterwards and act as if Cunningham had smothered a puppy on stage?

Was it you, sir? You actually felt a need to formally apologize for a speaker to refer to Obama by his full name?

I spoke to Bill Cunningham right after this entire episode. As you might have heard, he is now positively furious with you. I believe his exact words were, “There is now no way I will vote for Juan Pablo McCain after he threw me under the wheels of the Straight Talk Express Bus.”

And all of this just as you were gaining some ground with a bunch of worried conservatives.

I’ve really spent a lot of time wondering why you had to give such a passionate apology for Cunningham’s remarks. I suppose you thought it would be best to “nip it in the bud”, that if you didn’t, you would get eviscerated by the media.

But wouldn’t it have been just as effective to report that you didn’t hear his remarks, that he was entitled to his opinion, and Barack Hussein Obama is, after all, the man’s name? I mean, I heard that you said you didn’t ever recall meeting Cunningham, yet he told me you’ve met him on more than one occasion, even having dinner with him one night!

Listen, Sen. McCain, you may think this is none of my business. But a guy like me is putting his name and reputation on the line by fighting for you. I know that for every reason to criticize you, there are ten reasons to vote for you over Obama or Hillary.

But I urge you to think before doing something like trash a beloved radio talk host when you had to know it took a lot for Cunningham to warm up your crowd. Had you not apologized so profusely afterwards, it would have been tough for him to stop supporting you. After all, he didn’t have to accept your campaign’s invitation to introduce you. But by pretending that reciting a political opponent’s full legal name is grounds for shrill outrage you managed to tick off a lot more than one angry radio host.

I know a bunch of my colleagues in the talk radio business have been beating you up lately. And yes, I read the interview in Texas Monthly this month that your chief media adviser, Mark McKinnon, gave where he suggested that he doesn’t think Limbaugh and others are having much impact on your success.

But wouldn’t it be better to get as many of us in your corner as possible? We know we’re not king-makers – we threw everything we had at Bill Clinton (twice) and that didn’t work -- but why deal with the headache of folks with millions of captive listeners railing against your every move?

You don’t need the aggravation. You’ll have your hands full dealing with the messianic journey of Obama. You have your work cut out for you and I would submit you don’t need a bunch of radio hosts on your back.

So I’ll keep pointing out how important it is for Republicans to support a Republican like you during this 2008 election. I’ll defend you when I can, expose the Democrats for what they are, and hope for the best.

And I’ll even make you a deal: the next time you want a good introduction at one of your campaign events, I’ll do it, free of charge. I’m a pretty decent public speaker and I genuinely want you to win in November. I’ll talk up your positives and only refer to your opponents as “the senators from Illinois and New York.”

Surely that’s not anything you’ll have to apologize for, right?