Pandering In The Palmetto State 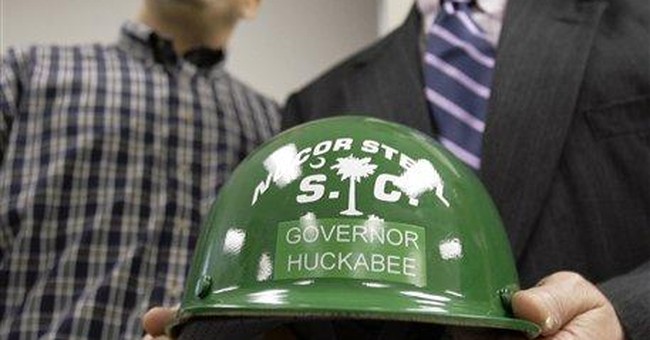 Every time I say something critical of a Republican presidential candidate, I painfully remember the famous Ronald Reagan philosophy that involved never saying anything bad about a fellow Republican.

I’m just not sure President Reagan anticipated the kind of struggle so many of us are having in trying to sort out the “RINOS” (Republicans-in-name-only) from the real ones.

And since I could never achieve the kind of greatness that Reagan did anyway, I might as well dive right in.

In an effort to pander to potential voters in an act that was reminiscent of Hillary Clinton’s demented drawl reading a Negro spiritual in front of a black congregation, Gov. Mike Huckabee, stumping for votes in South Carolina, said something on national television this week that was positively astounding.

Clowning around on an MSNBC talk show, Huckabee spoke of his connection to the people of South Carolina. “South Carolina's a great place for me. I mean, I know how to eat grits and speak the language.” (Cue the banjo music here). We even know how to talk about eating fried squirrel and stuff like that, so we're on the same wavelength."

I happen to be quite familiar with the state of South Carolina. Not only did I meet and marry my wife there, but two of our sons and my in-laws still call the Palmetto State home. Some of my happiest memories were created there.

And I never saw anyone frying squirrels, either in a popcorn popper (could that even be possible?), in a crock pot, a microwave, or any other method of cooking and eating a varmint like a squirrel.

Pundits are making a mistake in assuming that since Mike Huckabee is refreshingly candid about his Christianity, the Evangelical voter will automatically go for him. Besides, if people who defend Mitt Romney’s Mormonism like to remind everyone that we’re electing a president, not a pastor, that same position holds true for Mike Huckabee, right?

It didn’t take long for South Carolinians and people from all over the country to call into my radio show today and react to Gov. Huckabee’s assertion. The first call came from a fellow who claimed to have attended the same school as the governor and said he is about the same age. The caller agreed that the school was pretty strict about only allowing popcorn poppers in the dorm rooms. But he said that never, and I mean never, was anyone popping anything other than popcorn.

I take great umbrage at watching people denigrate the South. From debates over the Confederate flag to hearing how people mock the way Southerners talk, I’m constantly amazed at how much bias and prejudice and bigotry is allowed to be directed at people who live south of the Mason-Dixon Line.

It’s obvious that Mike Huckabee was trying to endear himself to South Carolina voters. But in that attempt, he succeeded in advancing every ugly stereotype that some have about people who live in the South. As the media elitists on MSNBC hooted with delight, the former Arkansas governor painted a picture of a bunch of South Carolina hillbillies who fry squirrels and use outhouses.

Most people in South Carolina don’t eat squirrels. They have running water, they wear shoes, and they don’t marry their cousins.

They are smart and worldly and politically astute. They accept southern-bashing with grace and quietly appreciate the beauty and hospitality of their state.

And they can spot a pandering politician a mile away.