Liberal Comics and Cartoonists Outnumber Conservatives – and That’s No Joke!

Mike Fuljenz
|
Posted: Feb 08, 2017 12:01 AM
Share   Tweet
The opinions expressed by columnists are their own and do not necessarily represent the views of Townhall.com. 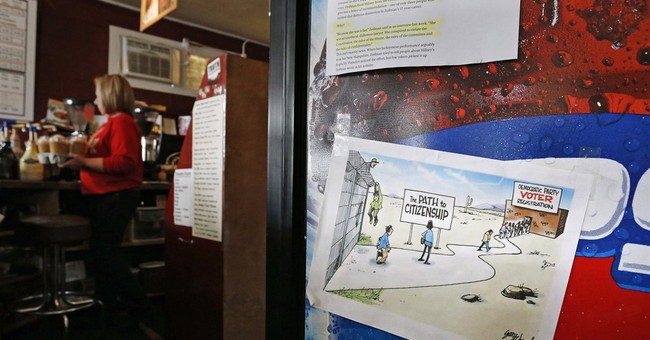 Last September, I attended the 15th anniversary of the 9/11 at the World Trade Center, including a memorial banquet hosted by former New York City mayor Michael Bloomberg. The nation was in the midst of a contentious political campaign, but Mayor Bloomberg was not political. The same could be said for the musical headliner, Bon Jovi. However, comic Samantha Bee was very biased in her barbs. I counted 14 jokes that hammered conservatives and only two targeting liberals. If it were a boxing match, I’d call her 14 attacks on conservatives “power punches,” while the liberal critiques were soft jabs.

Most comics are liberal, but in a non-political event like this why not balance Samantha Bee with an outspoken conservative comic like Dennis Miller? Better yet, hire Jay Leno, who has proven that he can straddle the middle of the road. A 2014 George Mason University study of Jay Leno’s political jokes from 1992, when he took over The Tonight Show, to January 24, 2014, showed that Democrats were the targets of 10,885 jokes vs. 9,465 directed at Republicans. The slight preference for Democratic targets is due to the fact that Democrats controlled the White House in 13 of Leno’s 22 years as Tonight show host.

Conservatives in Hollywood are rare. They are even more rare among TV “comics” (who usually double as political commentators, but then hide behind their “comic” role whenever their one-sided assault on conservatives is called into question.) Think of Bill Maher, or Jon Stewart on The Daily Show, or his replacement, Trevor Noah, or all the Daily Show spinoff personalities like Samantha Bee (“Full Frontal”), Stephen Colbert (“The Colbert Report”), Michael Che (“Weekend Update” on Saturday Night Live), or John Oliver (“Last Week Tonight.”). All are clearly and passionately left-wing in their barbed “humor.”

In July 2009, Time magazine conducted a poll asking readers to identify the most trusted newsperson in America. The winner was Jon Stewart. In 2010, the Center for Media and Public Affairs at George Mason University found that more late-night talk shows leaned left (than right) in their guest lists.

Here’s your homework assignment. Do what I’ve done: Count the number of liberal- and conservative-leaning cartoons in various publications and then let the editors know if you think they are not being fair.

Gold remains strong – and silver is even stronger – for the first five weeks of 2017. Last Wednesday, the Federal Reserve met in one of their eight-times-a-year Federal Open Market Committee (FOMC) deliberations, during which the Fed once again deferred raising rates, so gold shot up to $1,224 Thursday. Inflows into the SPDR Gold Shares, the largest gold-backed ETF, reached $413 million on Wednesday. On Friday, the jobs report was better than expected so gold corrected slightly to $1,220 but then gold recovered to $1,230 on Monday for a 6.1% gain for 2017 so far, vs. just 1.6% for the Dow Industrials.

The main cause of rising demand was the gold exchange-traded fund (ETF) market. There was a huge flow into gold ETFs in the first 10 months of 2016, as investors reacted to the Federal Reserve’s continual delays in raising rates, but demand for gold ETFs fell after Donald Trump won the presidency. Still, on a net basis, annual inflows into gold ETFs in 2016 reached 532 tons, the highest ETF demand since 2009.

Demand for gold bars and bullion coins was flat in 2016, at 1,029 tons, but fourth quarter demand for bars and coins in China was the strongest quarter since the second quarter of 2013. In both cases (second-quarter 2013 and fourth quarter 2016), gold fell sharply so the price-conscious Chinese bought more.

The biggest decline in physical demand came from India, once the world’s largest gold consumer. India’s gold demand fell by a huge 21%, caused in part by a strike of gold dealers in the spring, then a recall of large bank notes in the fall as India’s Modi government tried to fight the “underground” (cash) economy by banning all 500 and 1,000 rupee notes (worth only $7 and $14, respectively). Those notes made up 85% of the country’s currency in circulation – similar to banning all $20, $50 and $100 bills in America!

By contrast, demand rose rapidly in Europe, especially in Britain, after the Brexit vote last June, and the ensuing collapse of the British pound. The WGC reported a 28% gain in gold demand in Britain, due in part to the 16% decline of the British pound against the U.S. dollar and a 12% decline to the euro. Alistair Hewitt, head of market intelligence at the WGC, said that UK investors were “protecting purchasing power from currency depreciation,” adding that “2016 saw an unprecedented degree of political upheaval, which underpinned huge institutional investor flows into gold. Retail investors – having been subdued for most of the year – responded quickly to the price fall in the fourth quarter, a fact reflected by a surge in demand in the physical market.” Looking toward 2017, Hewitt concluded: “With an equally uncertain political and economic environment likely in 2017, we expect investment demand to remain buoyant.”

Central bank purchases declined 33% to 383.6 tons in 2016, the lowest total since 2010. Jewelry demand fell 15% to a seven-year low of 2,041.6 tons, mainly due to the big decline in India’s demand. Still, it’s encouraging to see gold rise 8% for the full year, despite a big drop in central bank and jewelry demand.

Last year at this time, the London Bullion Market Association gold survey was extremely negative, predicting prices below $1,000 in most cases. Maybe some of those analysts learned the lesson that they should not underestimate the price-conscious buyers of China, Europe and other markets. The LBMA’s 2017 survey is more bullish than last year. Their average forecast for gold sees a full-year gain of 5.3% to $1,220.

The summary statement of the LBMA survey says: “2017 will certainly be an eventful and unpredictable year given the high degree of geopolitical uncertainty, with a more nationalistic US President in residence and the indications that the UK will pursue a hard Brexit in its negotiations with the EU.” In addition, they said there is “the prospect of further uncertainty with elections to be held later in 2017 in both France and Germany, as well as the potential for tensions between the U.S. and China. Analysts are predicting that the gold price will trade in an average range of $1,101 to $1,379. Greater uncertainty should prove positive for gold as could higher inflation if the new U.S. administration adopts reflationary policies.”

The winner of the best forecast for 2016 was Joni Teves of UBS, who looks for gold to trade in a range of $1,150 to $1,450 in 2017, with an average price of $1,350, a 16.4% gain over the 2016-ending price of $1,159. She says, “We think gold allocation within a portfolio is warranted given a relatively benign rate environment, modest growth acceleration and elevated macro risks,” adding that “further gains in gold are likely to be driven by a continuation of strategic portfolio allocation from a diverse set of investors.”

The most accurate gold forecaster in 2015, Bernard Dahdah of Natixis in London, is more bullish for 2017 than he was in 2016, when he forecast a drop to $950. This year, he sees gold peaking at $1,400 with a low of $1,060, saying, “we expect 2017 will be marked by potential geopolitical tensions and uncertainties which could slow down the pressure emanating from the Fed rate hikes. These include tensions between the U.S. and China, a potential revision of the Iran nuclear treaty and problems in Europe, such as difficulties with the Brexit process, and surprises in the French and German elections.”