Mike Fuljenz
|
Posted: Apr 13, 2016 12:01 AM
Share   Tweet
The opinions expressed by columnists are their own and do not necessarily represent the views of Townhall.com. 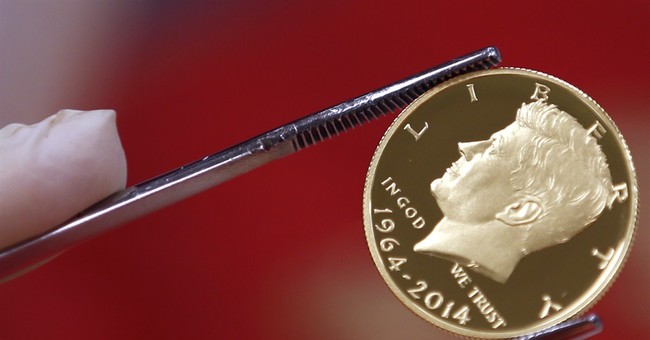 Gold recovered last week while stocks fell back. On Monday, April 11, stocks recovered slightly but gold rose faster, up to $1,260 at one point. Silver also reached $16, up sharply from its 2016 low of $13.58 on January 28. Gold continues to rise on a weaker dollar, the result of the Federal Reserve’s 180-degree flip-flop on monetary policy in the last month, moving from a projected four rate increases in 2016 to perhaps one or none. With U.S. economic statistics growing slowly or not at all, the Fed might not raise interest rates this year. They may even decide to cut rates again – reversing last December’s 0.25% rate increase.

As London gold expert Lawrie Williams observed: “three months into 2016, with gold up around 15%, most of the banks are falling over themselves to, at the very least, recant on last year’s year-end projections.” Canada’s RBC Capital Markets said they were increasing their 2016 average gold price forecast by 9% to $1,250 per ounce. They also raised their 2017 forecast by 8% to $1,300 an ounce.

Denmark’s Saxo Bank also sees positive trends for gold. The bank said last week, “The buying of gold was almost non-stop during the first quarter with hedge funds going from record short to their biggest net-long positions in 13 months… Strong momentum should see gold bugs reach but not breach $1,310.”

Last Monday, April 4, The Wall Street Journal printed an obituary for gold on the front page of its Money & Investing section. In “A Warning for Gold Bugs: This Rally Won’t Last”), Steven Russolillo warned that “Gold investors should enjoy the party while they can. The good times are probably coming to an end.” He gave us the old Wall Street reasoning about gold’s lack of income and real value: “gold doesn’t generate any income. Valuing it is virtually impossible.” He also used a chart that began in 2013 – gold’s worst year since 1981. He could have started in 2001 or much longer ago than that, but he chose 2013.

Last week, the Journal justified its anti-gold reasoning like this: (1) “the turbulent times that helped push gold higher at the beginning of the year have largely dissipated” and (2) “the financial markets have calmed.” This is fairly naïve reasoning – is terrorism defeated? Will central banks stop pushing rates lower? Will slowing global growth suddenly revive? Will nuclear proliferation end? The author admits uncertainty but he closes by saying: “A return of market panic can never be ruled out, of course. Barring that, it is last call for gold bulls. As much of the past five years have shown, the hangover isn’t pleasant.”

Now, just a week later, in the Monday, April 11 Wall Street Journal (“Gold Rises Amid Dovish Fed, Weaker Dollar”), author Mike Cherney says that gold is up to $1,258.50 “buoyed by expectations of a more dovish Federal Reserve and a weaker dollar” and on “fears of a global economic slowdown.”

The author quotes John Payne, senior market analyst at Daniels Trading, who said, “What’s changed from the last month to this month? Not much. I would imagine maybe the trend continues here.”

Maybe these two Wall Street Journal authors should compare notes – or interview gold market veterans who know how to analyze gold, or wait for some real news. Gold’s price may waver from day to day but the underlying fundamentals don’t change overnight. The forces that lifted gold up nearly 19% so far in 2016 – a lower dollar, lower interest rates, slowing global growth, slowing new production of gold, ETF buying, easy money policies by most central banks and heavy gold buying by some central banks – are still in place.

The U.S. Mint’s volume of sales declined in March from a torrid January and February pace, but the Mint just reported that first-quarter gold sales still managed to gain over 68% vs. last year’s opening quarter.

Since the Euro-zone, plus Switzerland, Denmark and Sweden (which are not in the Euro currency zone) currently impose negative interest rates on member banks, more European investors are turning to gold for safety and potential capital gains. As the tragic headlines from Belgium show, Europe is suffering devastating attacks from terrorists, following a seemingly uncontrollable influx of refugees from Syria and other troubled Middle Eastern nations. Over a million refugees entered Germany alone last year.

These concerns are driving more investors toward gold, according to Andrea Lang, director of marketing at the Austrian Mint. She said “they want to have a safe haven for their money.” Last year, the Austrian Mint’s gold sales increased 45% to 1.32 million ounces, while silver sales grew 59% to 7.3 million ounce.

At times like this, when more bullion coins are sold, more buyers are introduced to the fascinating and profitable world of rare coins. This often generates more numismatic coin buyers over the following year.