Mike Fuljenz
|
Posted: Jan 20, 2016 12:01 AM
Share   Tweet
The opinions expressed by columnists are their own and do not necessarily represent the views of Townhall.com. 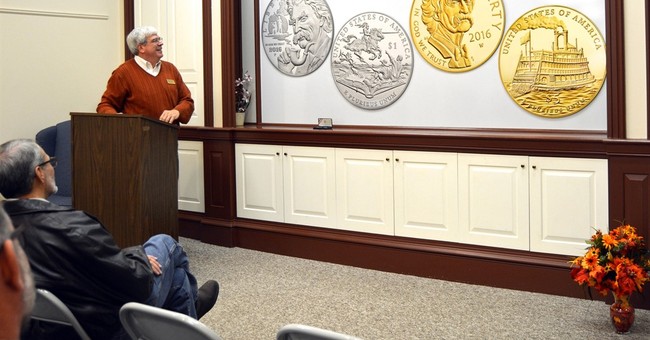 Gold is holding on to most of its early-2016 gains while the stock market has fallen sharply. Gold is up 2.5% so far in 2016 while the Dow Jones index is down 8.3% and some of the more volatile stock market indexes are down 10% to 12%. China’s Shanghai index is down over 20% since late December. Part of gold’s strength comes from the weakness of the U.S. economy and the threat of deflation. Last year, Producer Prices declined 1% (i.e., deflation) instead of reaching the Fed’s target of 2% inflation. The Fed raised interest rates a quarter-point in December and indicated they would raise rates further in 2016, but the advent of deflation and a slow economy will likely thwart their plans to raise rates further. This helps gold in the mind of most traders, since they (falsely) think gold competes with interest rates at their bank.

Mainstream investors have turned bullish on gold for the first time in nine weeks. After more than two months of “net short” positions (bearish on gold), traders have turned “net bullish” in the week ending January 12. Data from the weekly Commitment of Trader Report (COTR) shows that money managers increased their speculative long position of Comex gold futures by 3,176 contracts to 82,908. Shorts fell by 12,843 to 82,816 over the same period, so the gold market is barely “net long” now by 92 contracts.

Last week, we mentioned the shocking prediction of UBS, one of Switzerland’s “Big Three” banks, that U.S. stocks could collapse by 20% to 30% in 2016-17, with a commensurate rise in the price of gold. Now we see several other dramatic predictions from some of the highest levels of international finance:

Analysts at The Royal Bank of Scotland (RBS), one of the world’s top 20 banks, sees a “cataclysmic year” ahead for stocks. RBS analysts recommended that investors “sell everything except high-quality bonds,” adding the urgent note that “in a crowded hall, exit doors are small.” The bank is predicting a 10% to 20% decline in global stock markets, along with oil prices below $20 a barrel. Since China is a major consumer of industrial commodities, they say China’s slowdown “has set off a major correction and it is going to snowball,” They also say the Fed is “playing with fire” by raising rates in a slowdown.

Societe Generale, one of France’s major investment banks, is outdoing just about every other major bank in its concerns about the U.S. stock market. Their lead strategist Albert Edwards predicts a 75% decline in the most-watched major U.S. stock market measure, the S&P 500 index. He sees the S&P 500 dropping below its 2009 low of 666, all the way down to 550, nearly 75% below its peak last May. His reasoning involves “global deflation and recession.” As China exports its deflation, he writes, “the Western manufacturing sector will choke under this imported deflationary tourniquet.” He concludes that “the Fed and its promiscuous fraternity of central banks have created the conditions for another debacle every bit as large as the 2008 Global Financial Crisis,” which will create a “global recession.”

In the U.S., J.P. Morgan Chase has issued a “sell” recommendation for the first time in seven years.

Their lead strategist, Mislav Matezjka, explained: “In contrast to the past seven years, when we advocated using the dips as buying opportunities, we believe the regime has transitioned to one of selling any rally.” Another top J.P. Morgan analyst, Marko Kolanovic, thinks gold is a more profitable alternative. “In case an equity bear market materializes this year, investors should benefit from increasing allocation to cash or gold.” He explained that gold has recently exhibited “strong negative correlation” to riskier assets like stocks (meaning that gold is moving opposite to the stock market)

In addition, Jeffrey Gundlach, CEO of major bond dealer DoubleLine Capital, says that the U.S. is in a “stealth bear market” with many major stocks already down 20% or more in the last two weeks. He warns that this usually is followed by “full-on bear markets.” He further warned that “we could be looking at a really ugly situation during the first quarter of 2016. It’s particularly more likely to happen if the Fed keeps banging this drum of raising interest rates against falling inflation.” He urges concerned stock investors to switch to gold, since he sees gold shooting up over 30% to $1,400 per ounce in 2016.

Maybe some of these analysts are taking advantage of the desperation many investors are feeling about stocks and the global economy. Maybe some of them are “piling on” and making outlandishly dramatic predictions (like a 75% market crash) to gain some publicity for their firm, but many investors take these predictions very seriously and we may see a major movement from stocks to gold in the next few months. This type of gold bullion move typically results in large increases in sales of scarce gold coins. Get ready for the beginning of the price increases I predicted for 2016. To quote an old oil filter commercial “you can pay me now, or pay me a lot more later.”

Coins are Still Popular – Despite the Prevalence of “Paper & Plastic” Money