Picking Up the Pieces

Mike Adams
|
Posted: May 01, 2018 12:01 AM
Share   Tweet
The opinions expressed by columnists are their own and do not necessarily represent the views of Townhall.com. 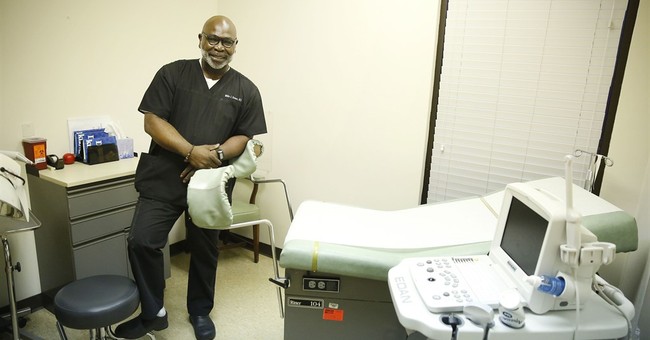 Willie Parker may be one of the most skillful abortionists in America. But he is also one of the least skillful liars I’ve ever encountered. He accuses pro-lifers of doctoring photographs of the aftermath of abortion. In the process, he goes so far as to say that the overwhelming majority of abortions are performed in the first trimester when the “fetus” has no “distinctive” parts. In addition to making the philosophical error of assuming that human worth is a function of body size, he is also misrepresenting the facts of what he does for a living. Here are his exact words:

“Most abortions, a full 91% of them, occur in the first trimester, when the fetus is no bigger, from crown to rump, than the first two digits of my pinky finger. It can’t be said to have any sizable, distinctive ‘parts’ at all.” P. 97 from Life’s Work: A Moral Argument For Choice.

Notice that Parker is so bold in his insistence that the unborn is too small to have value that he actually uses scare quotes to surround the word “parts.” This is meant to give the impression that the unborn is nothing more than an undifferentiated mass of cells. We’ve all heard that line for years and we still remember it. In contrast, Willie Parker has a hard time remembering things he just said. In fact, just one page prior to scoffing at the idea that the unborn has distinctive parts, he contradicts himself with this description of how he prevents potentially deadly infections in women for whom he just performed an “abortion care” procedure:

“I make sure I find every part, and I place them together, re-creating the fetus in the pan. I have done this so many times that it has become routine: no matter what these parts may look like, this is organic matter that does not add up to anything that can live on its own. This phase of the process is as crucial as any other, because it assures me that I have done my job completely and well. Abortion has an extremely low complication rate; when complications do occur, it’s usually because a physician has left some piece of fetal tissue behind, a circumstance that can lead to hospitalization, hemorrhage, infection, or both.” P. 96 from Life’s Work: A Moral Argument For Choice.

The question here is obvious: If there are no distinctive parts to an aborted fetus then how does he piece together the parts and discern with a naked eye whether all the parts are accounted for? The answer is also obvious: There are distinctive parts to any aborted fetus. Even as early as seven weeks after conception you can see more than just two distinct hands. You can actually count ten distinct fingers. (To view the evidence, just go to www.CaseForLife.com).

“Everything is more difficult in a second trimester abortion. The natural inclination of the cervix is to remain closed, especially in the context of pregnancy, and it takes training and finesse to open it safely and adequately to allow the extraction of a larger second trimester fetus … At sixteen weeks, the fetal skeleton is changing from soft cartilage to bone, and the calvarium, or skull, is too ossified to collapse easily and fit through a tube.” Pp. 99-100 from Life’s Work: A Moral Argument For Choice.”

It should go without saying that people get really mad when Willie Parker goes into these clinics to kill innocent human beings with distinct body parts including skulls so large that he has difficultly crushing them in order to make them fit through a suction tube. In fact, some even yell at him as he is on his way into the office to do his life’s work, which is ironically dedicated to ending life. Parker refers to having to see these anti-abortion protestors as being tantamount to being exposed to “psycho-terrorism.”

Terrorism is an interesting choice of words. When I think of terrorism, I imagine a dictator killing his own citizens through the use of chemical warfare. Parker, as you might imagine, has no problem engaging in chemical warfare on the unborn. As a doctor, he exercises his legal right to prescribe lethal doses of deadly chemicals to women wishing to effectively burn their unborn child to death with one dose of chemical, and then expel the burnt remains from the uterus with another dose. Since helping women wage chemical warfare on their “own body” is not without risk, Parker provides women to whom he gives RU486 the following warning:

“You should start bleeding within a few hours, and you may pass clots the size of an egg, or even a lemon. You can bleed heavily, soaking two pads an hour. That’s normal. But if you bleed that heavily for more than two hours, call us.”

Why does Parker sometimes relinquish control of abortions to women by giving them deadly chemicals? He says, “Women like it because it allows them to terminate their pregnancies at home, at their convenience, in the evening when their kids are asleep, without having to miss work or find child care.”

It also excuses Parker from the tedious task of picking up the visible pieces of an aborted fetus and putting them back together. With just enough poison, you can make certain that no tissue is left behind and that there is no risk of death due to an unwanted infection.

That way, a woman never has to imagine what it’s like to have no control over her body, her destiny, or her life.