Mike Adams
|
Posted: Mar 13, 2018 12:01 AM
Share   Tweet
The opinions expressed by columnists are their own and do not necessarily represent the views of Townhall.com. 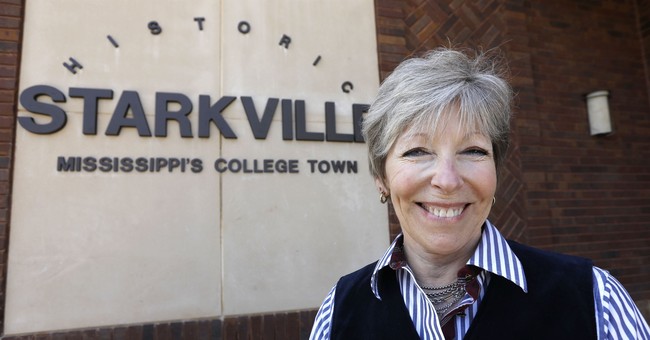 Most of my conservative friends understand that the current war on so-called offensive speech poses a serious threat to the future of the republic. Many of them understand that it is particularly dangerous because hypocrites posing as classical liberals wage it in a selective manner. Thus, conservatives must be careful that they engage this war in a principled manner. Unfortunately, with their recent efforts to shut down a gay pride parade in my former home of Starkville, Mississippi, some conservatives have demonstrated a disturbing lack of principle. Accordingly, I wish to go on the record in support of Starkville Pride and in opposition to conservative residents who wish to censor them.

Those objecting to the issuance of a parade permit for Starkville Pride have registered at least two objections, both of which are fairly easy to rebut. First, there is the concern that Starkville Pride is seeking an endorsement from the City of Starkville, including actual monetary support for the event. Second, there is the concern that the gay pride parade will involve public exhibitions of lewd behavior.

If Starkville Pride is indeed seeking an endorsement or sponsorship for their parade, this cannot be used as a justification for denying them a permit altogether. Put simply, there are only three things a government can do when it comes to human behavior – it may prohibit, permit, or promote. When that behavior takes the form of assembling to advance a particular viewpoint, the only reasonable option is to permit it. The government has no business prohibiting lawful speech. Nor does the government have any business promoting particular viewpoints. This is simply common sense. That is why we issue things called “permits” instead of “promotes.”

The City of Starkville is under no legal or moral obligation to actively promote the Starkville Pride event – unless, of course, they have previously promoted speech that presents a point of view contrary to the one Starkville Pride participants wish to express in their parade. If they have, then they need to contribute an equal amount to the promotion of the present applicants’ point of view – and then in the future get out of the promotion and prohibition business altogether.

In a nutshell, Starkville should stick to issuing permits liberally and leave it to the individual groups to raise their own support entirely. This includes security fees for the cost of policing events, which should be low and fixed regardless of the general content and specific viewpoint of the groups seeking permits. None of these so-called promotion concerns are complicated.

But this leaves us with the remaining concern that Starkville Pride parade participants will engage in lewd behavior in a public setting if granted a parade permit. There are only two possibilities here – and neither one justifies the denial of a permit for Starkville Pride in advance of the parade.

The obvious first possibility is that no lewd behavior will be exhibited in the parade. If this possibility comes to pass then the matter is resolved. No further comment is required here. However, the second possibility raises questions that require a little more discernment – and perhaps a little more restraint.

What should Starkville residents do if the gay pride parade starts to devolve into one of those sad exhibitions we have seen in larger cities all across America? What should they do if men wearing assless chaps start parading up and down the streets doing pelvic thrusts and otherwise simulating sex in a public setting? Two things come to mind:

-First, the citizens of Starkville should use the high concentration of sexually broken people as an opportunity to minister to the sexually broken. A woman objecting to the parade was quoted as saying that she did not want to turn Starkville into “sin city.” Has she ever considered turning it into “redemption city” by sharing the Gospel? Has she heard of the Great Commission? We should not allow a false sense of moral superiority to rob us of an opportunity to minister to those who are hurting themselves by pursuing a lie.

-Secondly, there is a political advantage to be gained from lewd exhibitions when they do occur. While I do support the First Amendment rights of Pride groups I must admit that I am irritated by some of their prideful comparisons. For example, many of their members have the unmitigated gall to compare themselves to the civil rights activists of the 1960s who marched up and down the streets of Mississippi being chased by attack dogs and sprayed with water hoses. To put it bluntly, the man wearing assless chaps and marching in front of an inflatable penis is a hedonistic narcissist – especially if he considers himself to be oppressed in the same way black people were in the 1960s.

If I were simply being pragmatic, I would never want to censor such a lewd individual. I would rather photograph his lewd march and contrast it with the experiences of legitimate civil rights marchers. In fact, I would use the contrasting pictures (the 2018 gay pride parade v. the 1960s civil rights march) to make signs that I would use in counter protests. But at no point would I censor a lie and thus deprive myself of a more effective means of expressing the truth. We must remember what John Stuart Mill said about censorship. It is wrong when it suppresses the truth. But it is also wrong when it suppresses a greater appreciation of the truth via its collision with falsity.

To the extent that we stay focused on the truth and not censorship, we can better help lead people out of darkness. That is the highest calling of men who are fortunate enough to live in a free society.

Author’s Note: Shortly after completing this column, the author attended a re-hearing of the permit issue at Starkville City Hall. The City reversed its ruling and issued the permit. Thanks to the conservative censors, the parade promises to be well attended.