Mike Adams  |  Jun 30, 2016
The opinions expressed by columnists are their own and do not necessarily represent the views of Townhall.com.
Top Columns
Trending on Townhall Media 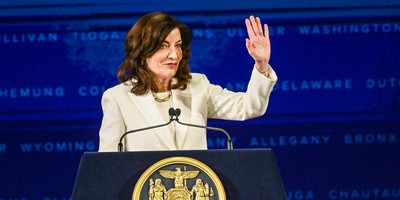 As a conservative criminologist, I get a lot of questions about gun ownership. People often ask me how to go about building a good firearm collection just in case things start to go south quickly. I usually respond by telling them to follow the Wal-Mart rule. It is probably the best way to make sure you are prepared when the republic finally disintegrates into utter lawlessness. The Wal-Mart rule involves three basic steps.

The second step in following the Wal-Mart rule is simply buying all the guns needed to fire all the ammunition sold at Wal-Mart. Obviously, this will take most people a few years but it is fun – and it is important to set goals for yourself! Just commit to buying a gun a month, if possible. For each of the aforementioned types of ammo, I would recommend the following firearms:

.17 rim fire. The beautiful Ruger 77/17 is tough to beat. This bolt-action rifle is both durable and dead on accurate. Talk about a tack driver! It is perfect for shooting small varmints outside the 100-yard range.

.22 long rifle. For years, I preferred using a simple Marlin bold action I bought twenty years ago at Dick’s Sporting Goods for a mere $119. However, I recently came across a tactical version of the Ruger 10/22 with a built in laser sight. This is now my official “go to” short-range small game rifle.

.22 magnum. For nearly twenty years, I have used the relatively inexpensive Marlin mn25. It is perfect for taking out raccoons and other nasty varmints anywhere within 100 yards. It is especially accurate up to fifty yards.

.223. I’m not a big assault rifle guy. But I do own a tricked out Ruger mini-14 with a scope, flash suppressor, and a handful of thirty round magazines. They are fun at the gun range and more than enough power to lay a coyote on its back with one well-placed shot.

.243. Nothing can separate me from my Browning A-bolt Micro Hunter. The barrel is just 20 inches but it is the most accurate rifle I own. Coupled with a Leopold scope, it is the perfect long-range white tail deer rifle.

.270. I prefer Browning rifles but I will recommend getting a Remington 700 to cover this selection. I just think it’s good to celebrate firearm diversity! However, when purchasing Remington rifles I do recommend getting models with detachable magazines. They are worth the extra money – as well as being easier to load and clean.

.30-30. I simply love my Marlin lever-action. This particular round has dropped more deer than any other in American history. It is really the ultimate brush gun and short-range white tail deer rifle.

.30-06. I have a Browning A-bolt Medallion. It is oh so pretty and oh so accurate. I cannot recommend this weapon highly enough. It is the perfect rifle for axis and mule deer.

7mm magnum. The Browning BAR is a good choice here. I think this particular round is the perfect elk round. This gun allows for a quick second shot if necessary.

300 Winchester magnum. I hate to keep doing an endless Browning promo. Nonetheless, I will recommend a Browning Stainless Stalker for this selection. If you have a 7mm mag probably you don’t need a 300-win mag. But this isn’t about need. It’s about want. This is America, dammit!

9mm. I am a big fan of Sig Sauer firearms. The first time I picked up a Sig 229 chambered in 9mm I put five shots into the same hole on an Osama bin Laden target. Some say the triggers are a little unforgiving. But it fit perfectly in my hand the first time I used it – so it was love at first sight. It is solidly built and reliable, too.

380 Automatic. I have no use for a 380 but women like to shoot them. That’s a good enough reason to own one. I like the Walther just because it’s pretty and James Bond used one.

38 Special, I never carry a 38 special but I frequently carry a .357, which also fires 38 special rounds. I prefer the Smith and Wesson Model 640 because it is hammerless and I can potentially shoot through my coat pocket and drop someone before they have a chance to draw. It kicks a lot with .357 loads so some may prefer to use 38s in the Model 640, given the short 2&1/4-inch barrel.

.357 Magnum. The Smith and Wesson Model 686 is more versatile and accurate than the Model 640. When it comes to recoil, the four-inch version will take some of the bite out of those .357 magnum rounds.

.40. I love my Glock Model 23. Reliable. Accurate. It is literally the one handgun I would keep if I were forced to choose just one.

45 ACP. My Springfield XD was a gift – along with four 13-round magazines. It’s a little bulky for my taste. But it is a reliable high quality weapon. Did I mention that it was free?

45-70. I love my Marlin lever action 45-70 with an 18-inch barrel. It is good for dropping big game at short distances. If I ever run into a moose in a phone booth, this is my weapon of choice.

20 Gauge. Here I go again recommending another Browning. The BPS (Browning pump shotgun) has a nice high-grade wooden stock with all that Browning reliability built in. It is perfect for taking out quail and assorted small game.

12 Gauge. I really like the 870 express tactical. It is high capacity, compensated, and has a rail for my red dot site. Come by the house to check it out – but only if you’re invited!

The third step in following the Wal-Mart rule is simpler, faster, and initially cheaper than the second. It simply involves picking up one box of ammo every time you go to Wal-Mart. Eventually, you’ll have all the guns and ammo you need to handle any situation life brings your way.

So today you can do something more constructive than just boycotting Target over the transgendered bathroom issue. Head over to Wal-Mart, dodge the falling prices, and get ready to take out a few targets of your own.