Mike Adams
|
Posted: Apr 05, 2016 12:01 AM
Share   Tweet
The opinions expressed by columnists are their own and do not necessarily represent the views of Townhall.com. 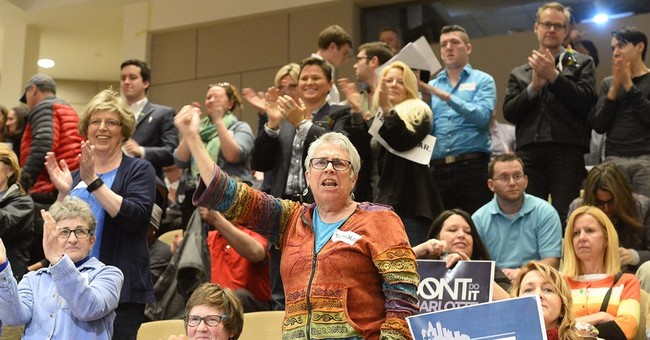 I’m old enough to remember a time when civil rights struggles focused on noble causes such as removing the barriers that kept black people from voting. Previous generations of civil rights activists fought so blacks and whites could use the same voting booth. This generation of activists fights so men and women can use the same bathroom stall. One could say that liberal activism has really gone down the toilet.

If you can wade through all of the activist hysteria, it is worth taking a look at the substance of the claims of supporters of the Charlotte, North Carolina transgendered bathroom ordinance. It is disturbing that such an ordinance ever passed through any city government and had to be stopped by the state legislature. Perhaps even more disturbing than the substance of their claims is the set of tactics used by LGBT activists to enforce the views of a small minority against the strong opposition of the majority. There are many, but here is an overview of some of the guilty parties:

An LGBT Activist City Council and Mayor. It is readily apparent that few supporters of the Charlotte bathroom ordinance actually took the time to read it. It did not merely apply to public restrooms. It also applied to so-called public accommodations. This means the city council was trying to control the bathrooms of privately owned restaurants and retailers, not just public buildings. Therefore, if you owned a restaurant/bar and saw a man following a drunken woman into the single-occupancy ladies restroom you could not have the final say on stopping him. He could simply manufacture a claim to identify as a woman and trump your right to control your own business.

By allowing perception rather than objective reality to control legal outcomes we invite fraud. In the process, we also water down the moral authority of the law. An informed public would never support this kind of legal nonsense. But the Charlotte City Council and the Charlotte Mayor do. And that’s all that really matters. So the law was passed.

The NBA. After the fascistic ordinance passed and was struck down by the state legislature the NBA had to weigh in by reconsidering its decision to host the 2017 NBA All-Star game in Charlotte. They claimed that North Carolina had become anti-gay. Why? Because Charlotte government got reeled in and once again had to let business owners rely on biological distinctions rather than “perceptions” when it comes to regulating access to bathrooms. My rebuttal to the NBA takes the form of four simple words: Women’s National Basketball Association.

Governor Cuomo of New York. Andrew Cuomo scares me so badly I think I’m beginning to suffer from Cuomo-phobia. This man actually had the audacity to visit communist Cuba, which is ruled by the Castro regime. He did this while completely ignoring the fact that Castro had previously authorized internment in concentration camps for people who were merely suspected of being homosexual. But now Cuomo has banned government workers from traveling to North Carolina because of HB2, which overturned the Charlotte bathroom ordinance. What makes things even more peculiar is that his own state of New York does not offer the same so-called anti-discrimination protections he is demanding legislators allow to stand in North Carolina.

In sum, I hope Andrew Cuomo doesn’t decide to boycott his own state. I want him to stay up there in New York. I don’t really care if this makes me sound like a raging Cuomo-phobe.

The Charlotte Observer. The leader of the effort to pass the Charlotte bathroom ordinance is a registered sex offender. Chad Sevearance, now-former president of the Charlotte LGBT Chamber of Commerce, worked as a youth minister in the late 1990s. He was later accused of luring young men to his apartment for stay-overs, showing them pornography, and trying to talk them into sex. As a result of one boy testifying that he woke up to find Sevearance “fondling him,” the LGBT uncivil rights leader was convicted for sexual molestation of a minor.

The Charlotte Observer initially ignored his conviction and status as a registered sex offender. Later, conservative opponents of the ordinance pressured them into doing their jobs and revealing the truth. There is simply no credible journalistic explanation for ignoring such highly relevant evidence on a matter of public concern.

Taking a broader view, the Charlotte bathroom controversy has all of the elements of modern day McCarthyism. We have committees of elected officials who refuse to obey the rule of law. We have people engaged in blacklisting because they unflinchingly accept the authority of the accusers. We have politicians joining the persecution for the purpose of political advancement. We have a press complicit in keeping the people uninformed about the true motives and character of the accusers.

Of course, there is one crucial difference. History has shown that Senator Joe McCarthy was battling an enemy that actually existed. In other words, McCarthyism as we have come to understand it never really happened in the 1950s.

But it is happening now in North Carolina. Don’t say I didn’t warn you.