Mike Adams
|
Posted: Mar 14, 2016 12:01 AM
Share   Tweet
The opinions expressed by columnists are their own and do not necessarily represent the views of Townhall.com. 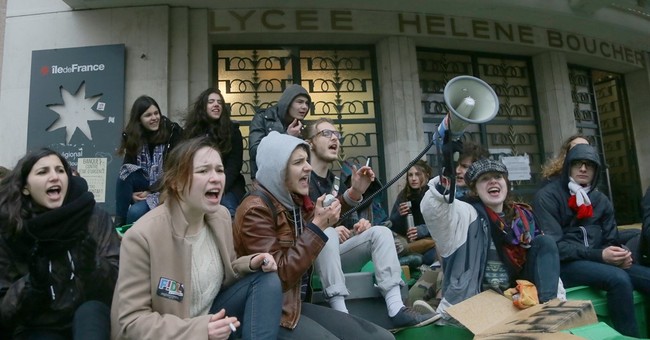 Members of Purdue Students for Life faced a torrent of criticism earlier this semester when they chalked the words “All Lives Matter” on university sidewalks.  The group also created flyers using the slogan “Hands up, don’t abort,” based on the language of protestors in the “Black Lives Matter” movement. Their use of this language was viewed as courageous by pro-lifers and controversial by leftists. In point of fact, it was neither.

Predictably, a white liberal university staffer led the faux outrage crusade. Jamie Newman who worked for Purdue at the time of the incident called the Purdue Students for Life “Vile, racist idiots.” Those who followed the controversy know he did not stop there.

Newman later posted comments on the Live Action News website which appeared to threaten the rape of female relatives of a pro-life commentator weighing in on the controversy. His online clarification that he did in fact offer to rape relatives of the commentator was a Godsend for the Purdue Students for Life.

In over a decade of working in campus activism I have never seen a pro-life group handed a better opportunity to seize the moral high ground in the abortion debate. Newman provided an unprecedented opportunity to accentuate the utter viciousness of the pro-choice movement. The vile, misogynistic underpinnings of his progressive mindset were on full display for all to see.

What did Purdue Students for Life do with the opportunity? In short, they blew it. Instead of remaining focused on those who falsely accused them of racism they actually began to take seriously the idea that they had brought it all on themselves.

Snatching a defeat from the jaws of victory and elevating pro-life cowardice to a Zen Art form, the Purdue Students for Life actually published an apology to the Purdue University community. While the letter is too long to reproduce in its entirety, I have reproduced the worst portions below in italics. As a service to more committed pro-life activists, I have followed each portion of their letter with my own thoughts about what Purdue Students for Life should have said to the university community in the wake of the slanderous responses to their well-reasoned advocacy.

First and foremost, we would like to apologize for the pain this campaign has caused. It was never our intent to shame or condemn any group of people, either the black community or post-abortive women, or to make any person feel discriminated against.

First and foremost, we would like to say that we offer no apologies whatsoever for the campaign we launched in defense of innocent children or for our decision to highlight the hypocrisy of the Black Lives Matter campaign. The number of unborn black children killed by white abortion doctors far exceeds the number of blacks who are killed by white cops. To ignore this fact is to engage in passive acquiescence to systematic racism. We will have no part of it. It was never our intent to shame or condemn any group of people, either the black community or post-abortive women, or to make any person feel discriminated against. Anyone who suggests that we did so is trying to change the subject because they lack the intellectual fortitude to respond to our arguments.

Although black pro-life activists have also done so in the past, we recognize the harm we caused by using slogans from the Black Lives Matter movement. In pursuit of a greater good we co-opted language that we did not fully grasp the implications of, and in doing so inadvertently caused a lot of anger and a lot of hurt. We apologize for this, as it was never our purpose to divert attention from other important issues that affect the black community.

Given the empirically indisputable fact that black pro-lifers have used the very same slogans we used in our campaign, it is clear that our opponents are making false allegations of racism in a desperate attempt to mask the racism inherent in their own position – namely that of ignoring the systematic slaughter of black babies in the name of “choice.” Perhaps those exhibiting faux racial outrage were ignorant of the fact that black pro-lifers also use these slogans. However, ignorance on their behalf does not constitute racism on ours.

We know now that it would have been wise to reach out to the Black Cultural Center and other African-American groups and get their input in order to avoid this exact problem – poor communication on our part caused not by malice, but by not realizing exactly how our words would affect the black community on campus.

It should go without saying that this incident could have been avoided if the Black Cultural Center had been doing its job in recent years. Had they properly educated the black community on the history of Planned Parenthood and the disproportionate effects of abortion on the black community then it would not have been possible for campus liberals to assemble lynch mobs to attack people for speaking out against racism. Universities should be governed by the rule of law, not the rule of mobs.

The way in which we tried to bring these issues to light has created the notion on campus that we are racist, that we think black women are bad mothers, or that we want to shame and bully people into agreeing with us. None of this is true.

We are very proud of the way we tried to bring these issues to light. The backlash has demonstrated conclusively that campus leftists are racially insensitive, that many favor abortion because they think black women are bad mothers, and that they must shame and bully people into agreeing with them. Thank God the First Amendment has allowed us to prove the veracity of Justice Brandeis’ eloquent observation that sunlight is often the most powerful of disinfectants.

In our meeting this week, it seemed that the biggest problem with our message was caused not by what we said, but how we said it; the flyers we posted were too vague, allowed too much room for speculation and used co-opted language. We will avoid future miscommunication and offense by being better communicators – by being less vague in our writing, more careful with our wording …

There was nothing unclear in our principled defense of the unborn. Anyone who did not understand our point suffers from severe intellectual hernia. Campus leftists simply need to stop their dual assault on innocent speech and innocent human life. Furthermore, they really need to get a life of their own.