You Are Not Alone

Mike Adams
|
Posted: Jan 08, 2016 12:01 AM
Share   Tweet
The opinions expressed by columnists are their own and do not necessarily represent the views of Townhall.com. 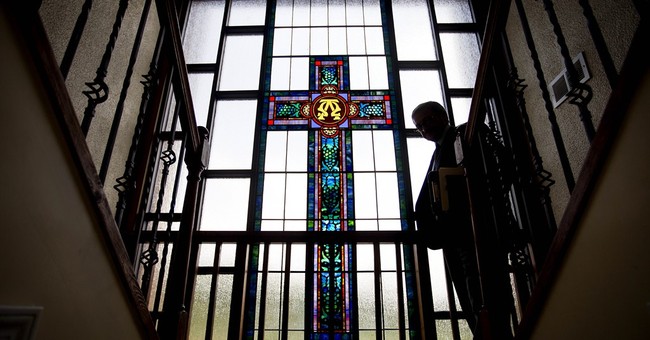 Over the last several months, the supportive emails and calls I have received have greatly outnumbered the hate mails, which usually come from feminists who hate males. The influx of support can be attributed largely to a viral column I wrote last semester called “Get Out of My Class and Leave America.” After it ran, people called my office voicing support for over 40 straight days. I say “straight” days based on the safe assumption that none of these callers were gay activists.

As much as I appreciate the support, it is based on the fiction that I am some sort of fearless conservative crusader standing alone against a rising tide of liberal tyranny on a secular college campus. The following correspondence from one of my readers illustrates the misconception:

Dr. Adams, I just want to thank you for the stand you have taken. Over the years, you’ve taken this stand alone and never wavered in your courage or in your faithfulness. I applaud you, sir.

As much as I appreciate the sentiment, that reader never would have sent his email if he had been seen me on September 10, 2012. It was the night before the 11th anniversary of 9/11. It was also five and one-half years into a federal First Amendment lawsuit that was consuming my existence. My legal team had won an important ruling in the 4th Circuit seventeen months earlier. However, we were still waiting on the judge to rule on a motion that would determine whether the case would go to trial. Unfortunately, the judge had been sitting on the motion for almost a year. The waiting was excruciating.

Like many times during that period, I woke up in the middle of the night because I was overwhelmed with anxiety over the case. I don’t pray as often as I should and I certainly am not the kneel-and-pray-at-the-edge-of-the-bed type. However, on those nights when I was unable to sleep, I had no choice.

On that particular September morning when I was kneeling by the bed something interrupted the normal prayer process. It was this feeling of uncontrollable anger. It was so strong that I suddenly stop praying and started confronting God with questions. “Why have you left me alone to fight against these godless secularists?” “Why have you abandoned me after I have come to faith and taken a stand?” “Why have you left me weary and without the energy to go on?” And, finally, “Why won’t you cure me of the propensity to end my sentences with prepositions?” Just kidding on the last one.

When the alarm went off I was still lying on the floor where I had cursed myself into a state of unconsciousness. I had shouted for so long that I lost my voice, which would not come back for three whole days. The liberals were ecstatic.

After I picked myself off the floor, I made a cup of coffee and assumed my position in the leather chair in my sunroom. I tried to start my daily ritual of reading but I could not. I had this feeling that I had just blown it – that my tirade meant that now I really was alone and doomed. So I decided to check my email, which included the inboxes on my social media accounts.

When I logged on to my Facebook account, I had a single message sent from a woman I met working at Summit Ministries several years earlier. The message was a literal Godsend. I have copied her words below and not a single one has been altered:

Hey Mike! So, this is really random, but tonight I was talking with the Father and He put you on my heart to be praying for. Sometimes He shows me pictures or gives me specific words also, and He gave me some for you. First, I saw you kneeling and it looked like you were all alone in a dark place somewhere. But then He let me see that picture zoomed out, and I realized you weren't alone or lost in darkness, you were inside His heart. Then I heard Him say that you have a very special place inside His heart. In addition, I pray specifically against any weariness or abandonment in your life and that you speak out His abundance, joy, comfort, and encouragement! You are not alone!!

This is one email message I responded to. It wasn’t just because the sender also has a problem ending her sentences with prepositions. It just came at the best possible time and she needed to know. I also wish I had the time to respond to all of the encouraging emails I have received over the last few months. Unfortunately, time will not allow it.

Suffice it to say that the encouraging emails I get from people should not be viewed as a response to courage on my behalf. I see them as only reason I have been able to keep going in spite of my own personal weaknesses and my frequent lapses of faith. I am thankful for each of them even though I may never have responded.

Regardless, I thought it would be good to run this column for any of my readers who are presently in a dark place. The picture will eventually zoom out. Then you will see that you weren't really alone or abandoned in the darkness.