Take This Blog And Shove It 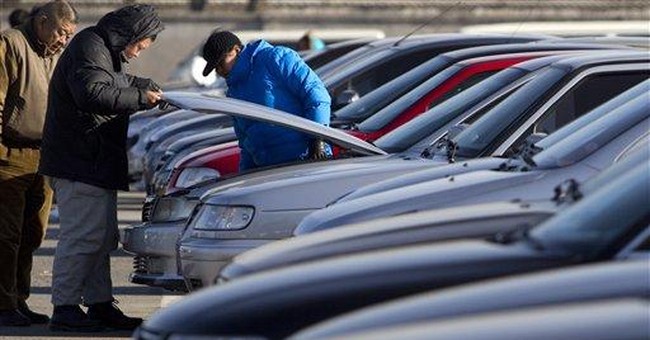 I want to thank you for your invitation to be interviewed on your local news program. I am afraid that I must respectfully decline your request. In fact, I will not be accepting any future interview requests from your news outlet. I am writing today to provide an explanation for my blanket refusal.

As an initial matter, you are probably perplexed by my decision to refer to you as a used car salesman – given that you consider yourself to be a journalist. My refusal to use your preferred job title is an example of the norm or reciprocity. I am simply giving you the same respect you have given me in the past.

On four occasions, you have done stories involving me in which you either called me a “right wing blogger” or made a specific reference to my “right wing blog.” Each time I asked you to correct the misrepresentation. The reason I made the repeated requests is that I simply don’t have a blog. In fact, I don’t even have a website. But I do have a theory about why you have invented “my right wing blog” out of whole cloth. Before I elaborate, let’s explore one possible source of your confusion.

It is possible that the phrase “right wing blog” is a reference to my column at Town Hall, which is owned by the national news outlet Salem Media Group. If I am correct, three questions emerge. I will pose the questions and their obvious answers below:

1. Given that only by clicking on “columnists” can you access my writing why do you persist in referring to it as a “blog”? The answer to this is obvious. You consider columnists to be professional journalists and bloggers to be amateur journalists so you engage in the word switch in order to bias your readers against the content of the writing.

2. Given that Town Hall describes itself as a source of conservative commentary, why do you replace the term conservative with “right wing?” The answer to this question is equally obvious. The word “conservative” is too tame. Someone can be conservative or liberal and be within the mainstream of public opinion. But your goal is not to report facts and let people arrive at their own conclusions. Your goal is to change opinions – with the specific goal of liberalizing your readers. You would like all conservatives to be seen as extremists. That’s why you routinely substitute “right wing” for conservative. Eventually, your viewers follow your lead. This practice explains why policy positions that were deemed normal a few years ago are seen as “extreme” today.

3. If the “blog” you are referring to is the Town Hall column then why do you refer to it as “mine.” For example, when you report, “Mike Adams is in hot water for comments he made on his right wing blog” it sounds like I am sitting in my basement posting on a website I own. Obviously, Salem Media Group is a large media outlet. In addition to owning Town Hall, Salem owns numerous radio stations hosted by prominent conservatives. None of them are extremists.

And that is what you should call me. I am simply an opinion columnist who happens to have different opinions than you. I am expressing views shared by tens of millions of Americans. Therefore, it is not necessary or accurate to conjure up images of me running a fringe right wing blog while sitting in my basement wearing pajamas with a coffee cup in one hand and an AK-47 in the other.

I mention all of this because your bias is more than merely symbolic. It spills over into the substance of your reporting. The best example is the last story you did on my alleged refusal to comply with the requirements of a federal law called Title IX.

To refresh your memory, government bureaucrats had misrepresented the requirements of Title IX and suggested professors were under an obligation to divulge the names of any students who had ever confided that they had been raped. This included rapes by men not affiliated with the university - and which happened off campus. I reported one such rape to the local District Attorney. But I subsequently refused to divulge the victim’s name to a Title IX bureaucrat.

You subsequently ran a news story that said I was defying the law. But your story did not say why. In other words, it said nothing about my defense of a rape survivor’s privacy against a bureaucracy that was misrepresenting the requirements of the law. To turn over her name years after she was raped would have been another violation of her dignity. I stood my ground in order to protect her from the re-violation and won.

The reaction to your bad journalism was predictable. First, a Women’s Studies professor attacked me on Twitter for allegedly violating Title IX (by not re-violating the victim). Then, numerous feminist students went ballistic on social media. One of them went so far as to call me a “pro rape activist.”

People instinctively blame such leftist student outbursts on the professors who are dumbing them down by providing them with indoctrination instead of legitimate knowledge. But too often the press gets a pass for doing precisely the same thing. Together, bad professors and bad journalists like you are significantly dumbing down the larger society. You actually make people less informed with your “journalism.”

Running a story without giving readers the most central facts is like selling someone a car without an engine. That is why I will avoid your lot altogether.