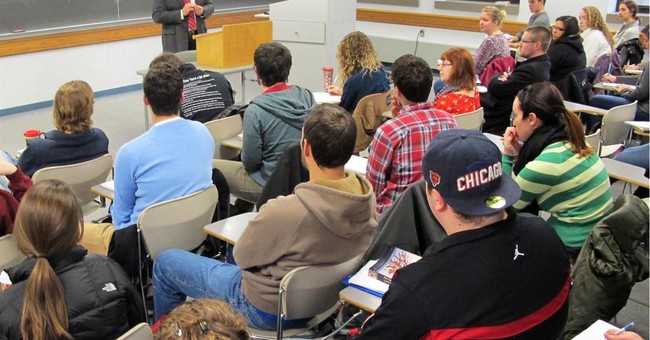 Kirsten Powers gets it. There is an assault on free speech in this country that is coming from the political left. But the people responsible for it are not liberals. They aren’t worthy of the title of liberal, which presupposes a degree of tolerance for opposing opinions. They are illiberal leftists and they are crushing the free exchange of ideas in this country. To make matters worse, they know exactly what they are doing and why they are doing it. In other words, they are not ignorant of, or merely indifferent to, constitutional principles. They are at war with them.

You can see it on our nation’s campuses. Between 1987 and 2008, protests geared towards “disinviting” speakers with unpopular views resulted in 62 campus event cancellations. Between 2009 and 2014, there were another 62 campus event cancellations. In other words, over the last few years, campus protestors have become increasingly committed to silencing dissenting opinions. And the pattern is not random. According to the Foundation for Individual Rights in Education (FIRE), conservative speakers are targeted for “dis-invitation” twice as often as liberal speakers.

It is no wonder that students are beginning to protest actively against the free exchange of unpopular opinions on campus. They are learning it from their professors. University of Pennsylvania professor Mary Frances Berry once admitted “There is no evidence that tea party adherents are any more racist than other Republicans, and indeed many other Americans.” After the admission, she went on to defend making false accusations of racism as a means of quashing debate. She stated, “Having one’s opponent rebut charges of racism is far better than discussing joblessness.”

That’s sums up the mindset of the illiberal left. Attack your opponents as a means of limiting political discourse. Next, declare victory. Finally, don’t forget to reaffirm your commitment to tolerance and diversity.

Unfortunately, college administrators are increasingly backing these illiberal leftists. At Marquette University, an instructor named Cheryle Abbate banned any speech questioning same-sex marriage from her classroom. It is worth noting that Marquette is, or once was, a Catholic university.

Marquette political science professor John McAdams justifiably criticized Abbate in a blog post. Rather than firing Abbate for her assault on free speech, the Marquette administration relieved McAdams of his teaching duties. Thus, an orthodox Catholic view on marriage came to be ruled outside the bounds of discourse at a Catholic university. Welcome to the inverted world of higher education where the illiberal left prepares future generations to function in the marketplace of ideas.

Sometimes the assault on free speech is literal. Dr. Mireille Miller-Young is a feminist studies professor at the University of California – Santa Barbara (UCSB). She actually physically attacked a sixteen-year-old pro-lifer who was handing out anti-abortion literature on campus. Her crime? She offended the feminist professor who was pregnant at the time and who also teaches reproductive rights.

After physically attacking a minor for opposing violence toward unborn children, she told police she had a “moral right” to do so. But when the case went to trial, the jury had a different view. She was convicted of theft for stealing the teenager’s anti-abortion sign and also battery for attacking her.

But her fellow professors stood up and condemned her, right? Wrong. Twelve professors sent letters to the judge vouching for her character and describing her as “open-minded.” One lauded her “kindness combined with her commitment to justice.”

Even though UCSB is a publicly funded institution, no one in the administration ever apologized for Miller-Young’s literal assault on free speech. Elevating arrogance to a Zen art, Vice Chancellor for Student Affairs Michael D. Young sent a letter to students noting, “During the last few weeks, UCSB has been visited by various anti-abortion crusaders.” After lamenting the fact that they were creating unrest on campus, he called them “provocateurs.”

In other words, the pro-lifers provoked the physical attack. They deserved it.

When they are not resorting to physical violence to quash debate, campus leftists are claiming that they feel “unsafe” whenever they encounter a dissenting opinion. This explains the recent popularity of trigger warnings, which are used to warn people of the “danger” of encountering constitutionally protected speech. I’ll cover that in the next installment. Don’t say I didn’t warn you!

In the meantime, please pick up a copy of Kirsten Power’s new book, The Silencing.