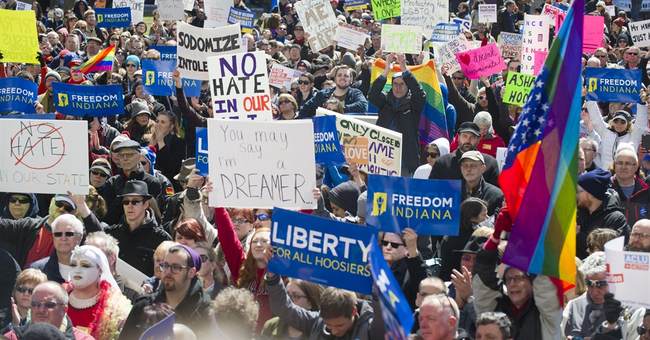 My liberal friends, all three of them, are up in arms over the Indiana RFRA controversy. As usual, their views on the issue are driven by emotion, not reason. That is because liberalism is not really a political philosophy. It is a stage of arrested emotional development. Since the Indiana RFRA controversy revolves around their core religion, which is the so-called gay rights movement, their emotionally laden “political” observations are not likely to subside in the near future.

Until then, it helps to understand what the current crisis in Indiana is really all about. Hint: It’s the same thing we were arguing about in the War Between the States. It’s also the very thing we were debating in the 1960s civil rights movement. It’s a thing called involuntary servitude.

A few years ago, I declined a wedding invitation from a friend. His wife is an alcoholic and he joked about how she would probably stumble her way down the aisle adding that he hoped she wouldn't fall on the way to the front of the church. I decided I didn't want to be a part of a ceremony that would mock the institution of marriage. Now imagine I were still playing guitar at weddings for a living - as I once did before I took a pay cut and became a professor. Would anyone seriously assert that I should be forced to play at the wedding I would not even want to attend?

All of this nonsense about protected classes is utterly beside the point. One would never argue that a black baker should have to serve food at a Klan rally. Learning that a few of the Klansmen were not ordinary whites - but also homosexuals - would not change the equation one iota. The issue is still involuntary servitude.

Some have expressed a concern that the new Indiana law and others like it might be used to justify blatant forms of discrimination. Perhaps a truly homophobic restaurant owner would refuse to serve gays – just like racist restaurant owners used to refuse service to blacks.

I really wish that were the case. Truly homophobic restaurant owners should be able to refuse to serve gays. Just like racist restaurant owners should be able to refuse service to blacks. Should such problems arise, the solution would not be laws to prosecute the bigots. It would be a free press to run them out of business. (Isn’t it ironic that today’s press falsely reports about RFRA and then cheers on bigots who attempt to run people out of business?)

Government imposed tolerance merely masks true bigotry. Sunlight, in the form of freedom of speech, is the only effective disinfectant. One hundred years ago, true progressives like Louis Brandeis understood that. Now, most people who call themselves “progressive” would be more aptly named regressive.

But the Democrat Party has never really been a progressive party. In the final analysis, little has changed in the last 200 years. Republicans are simply trying to end slavery while Democrats are tying to impose it.