It Takes A Village To Raise A Looter 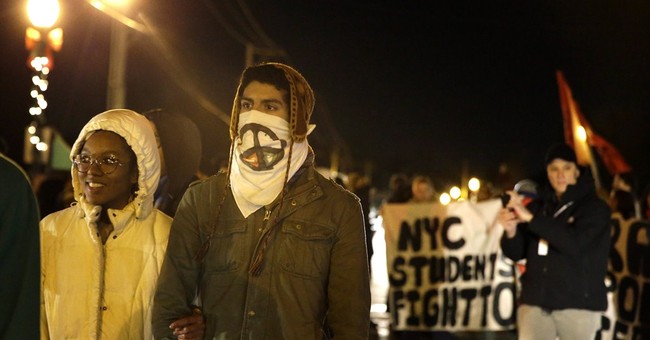 Earlier this semester, the UNC-Wilmington African American Center hosted a panel discussion on the Ferguson race riots. A student of mine noticed that none of the panel participants actually visited Ferguson. Given that I interviewed protestors on site in Ferguson in August, the student wanted to know why I was excluded from the panel. It would only make sense to assume that I had some unique insights into the Ferguson situation relative to those who had never actually been there.

Of course, the problem with my student is that he is a man of principle and thus fails to comprehend the true basis for expertise in academia. Most people assume expertise is determined by knowledge. In academia, expertise is determined by ideology. That is why the African American Center chose an avowed Marxist feminist to represent my department and sit on the Ferguson panel despite the fact that she would never go to a real protest with real black people.

Tellingly, the Marxist panelist is one of only two UNCW professors to have been sued in federal court for a violation of Section 1983. She lost but since her victim was white she was given a pass. Those who would object to her invitation to sit on the panel might ask, "What could she possibly know about civil rights, given that she previously lost a federal civil rights suit?" But they would be missing the point that knowledge is irrelevant to academic determinations of expertise. Ideology is the sole criterion.

Choosing a Marxist was safe because there was virtually no chance that she would articulate any idea that the black victimhood center did not already endorse. By inviting a Marxist, two ideas would be firmly reinforced:

1. The cause of black on black looting is white on black racism. Or, more generally, black crime is determined by "society," not chosen by individuals.

2. The remedy for black on black looting is not to rebuild black businesses. It is to expand the size and scope of the federal government.

If you think I am merely quibbling with my own university and with my communist colleagues you are wrong. This is not about me and my particular university. It is a national trend as well as a national tragedy.

Just last weekend, Fox News reported that Chenjerai Kumanyika, an assistant professor at Clemson University, traveled to Ferguson to help the protests expand and to disrupt businesses in the larger St. Louis area. Fox quoted Kumanyika as saying "Capitalism is one of many systems of oppression." One wonders whether communism is among the "many systems of oppression." Welcome to the inverted world of hire education.

By sending the message that people are not responsible for burning down their own neighborhoods, academics are contributing to the likelihood that it will happen again in the future. And they know it. In fact, it is their goal to do away with private business and fill the void with government agencies.

According to the Marxist worldview, it is foolish and naive to think that black protestors are simply betraying their own people by burning down black-owned businesses. Instead, they are turning against those who have betrayed them by daring to start a business. In that sense, the white cop and the black entrepreneur are one in the same: they are members of the bourgeoisie.

To the tenured Marxist, black entrepreneurs are more than just oppressors. They are uppity Negroes who have forgotten that their place is on Uncle Sam's Plantation. Black looters are the victims. Black businessmen are getting the social justice they deserve.