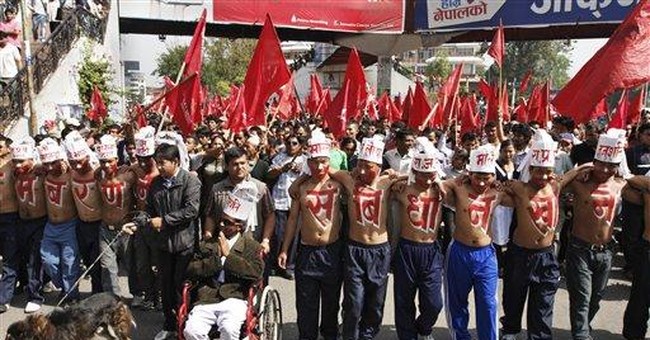 There is a video that has been circulating around Facebook featuring me in a “dialogue” with several pro-abortion protestors from the socialist club at UMASS-Amherst. I’m glad the video is making the rounds. I generally like to use socialists to make my arguments look better by contrast. I’m also glad the students each helped illustrate a more specific point I’ve been making about socialists for years. These points follow in no particular order of importance:

1. Socialism and humor are incompatible. There’s nothing very funny about murdering 100 million people in 72 years. That is the true legacy of communism’s glory days. The gentleman in the black shirt who approached me at the beginning of this video provides a representative example of the demeanor of most socialists. His first question to me is “Do you have anything witty to say?” He turns to the camera later and asks “Do you guys actually think he’s like a funny person like humorous?” After the speech, he quoted a joke off my website and asked whether I thought it was funny. Here’s my response to the gentleman in the black shirt:

2. Socialists are dumb. The socialist woman in the glasses is a particularly useful idiot. During our brief confrontation she informed me that sperm is alive. She claimed that if I thought abortion was murder then I was also bound to believe that ejaculation and menstruation constitute murder. She was eventually hauled out of the auditorium by the police after screaming inaudibly while I was trying to speak. I think she was angry because of my response after she said they (the socialists) were going to overthrow us (the ruling class). I simply said, “I’ve got guns, you can’t overthrow me.”

Apparently, she was too dumb to understand why the police were able to haul her out of the auditorium: They had guns and she didn’t.

And, speaking of arrests …

3. Socialists are stuck in an arrested state of emotional development. Please take the time to check out the blonde with the scarf over her face. She kept saying, “It’s my body, my choice.” When I asked her why she was so angry, she said it was “her choice” to be angry. Just for fun, substitute the word “toy” for “choice” and you’ll see what I’m talking about.

“Keep your hands off my toy” becomes “Keep your laws of my body … my body, my choice!” twenty years later. The emphasis is always on their gain, not on another’s loss - “To me according to my need!”

4. Socialists suffer from attention deficit disorder. The gentleman who refused to shake my hand led the chant “Racist, sexist, anti-gay, right-wing bigots go away” when I spoke at UMass in 2006. This time he was hauled out of the auditorium for shouting over me during my speech and then refusing to say whether he was finished screaming. As the police dragged him away he just extended his middle finger.

When there is no substance to a tantrum one must assume it is just a ploy for attention. This generally comes from kids who were put into day-care too early and too often. The irony is that America’s move towards socialism drives up taxes, which forces mothers to work. This, in turn, forces kids into day care. This makes the kids seek attention by adopting political positions which happen to be chic (like socialism).

It is a vicious cycle indeed.

5. Socialists are morally outraged without any source of morality. Finally, there is the brunette girl in the black shirt seen throughout the video. She got up and gave her own speech after mine was over. She was angry and I asked her why. She replied by admitting she was angry because she found my opposition to abortion to be morally “reprehensible” - and she actually did use the word “reprehensible.” It is interesting that socialists believe that God needs to be done away with. Yet they still claim to have a basis for moral condemnation.

Of course, none of these kids realize they provide such a good argument in favor of capitalism. Nor do they realize they have given me a great idea for a new promo for www.DrAdams.org. Thanks to my good friend Jim Weaver of Point Blank Advertising, we are now sending “I Hate Mike Adams” bumper stickers to those who make a contribution of $5 or more.

If you know a socialist who hates liberty, please give him an “I Hate Mike Adams” bumper stick today. When he puts that sticker on his old beat-up car – probably right next to “Obama 2008” – he won’t realize that he’ll be giving my website one helluva plug. Nor will he realize people will love what they read on my site just as much as he hates it.

As you can see, I believe we need to put our socialist idiots to work for us. It might be the only decent job they ever have.