Science, Secrecy and Lies in Oklahoma

Michelle Malkin
|
Posted: Feb 14, 2018 12:01 AM
Share   Tweet
The opinions expressed by columnists are their own and do not necessarily represent the views of Townhall.com. 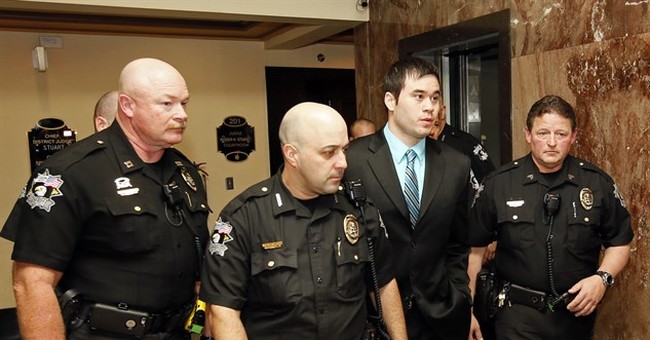 Forensic scientist, criminal profiler and crime reconstructionist Dr. Brent Turvey and independent forensic DNA consultant Suzanna Ryan spoke out about the Holtzclaw case for the newest episode of my investigative program on CRTV.com.

Reflecting on the confirmation bias that drove the investigation, the elementary failures of evidence collection and the forensic missteps, Turvey told me that he and his colleagues "cannot understand how this case got into trial at all."

Holtzclaw is the wrongfully convicted Oklahoma City patrolman caught up in the nationwide anti-cop frenzy and social justice riots of Ferguson and Baltimore. After initial accuser Jannie Ligons -- who is suing Holtzclaw in a high-dollar lawsuit represented by Al Sharpton 2.0, Benjamin Crump -- went public with her sensational sexual assault claims in June 2014, Oklahoma City sex-crimes Detectives Rocky Gregory and Kim Davis solicited a field of 13 total accusers. They were all black women and almost all had histories of drug abuse, mental illness, prostitution and multiple crimes.

No "linkage analysis" was done to establish a factual basis for the alleged victim profile, Turvey told me. The profile was created from gut feelings, not science or professional expertise.

Seven additional accusers, including one male, told such preposterous stories that the cops were forced to reject them out of hand. Only one was prosecuted for lying to police. Of the 13 who went to trial, the jury rejected five of the accusers' stories and cleared Daniel of their charges (18 out of 36 total).

Detectives Gregory and Davis preemptively told accusers they were searching for sexual assault victims of a "bad guy" on the police force and badgered women who repeatedly had denied they were victims of any sexual improprieties, refused to look at lineups or described an alleged attacker as "short" and "black" or "dark-skinned" (Daniel is 6-foot-1, pale and half Japanese).

Turvey -- who has worked for government agencies and universities across the world and authored multiple peer-reviewed textbooks on criminal profiling and investigation, forensic criminology and victimology, forensic science, criminal justice ethics and law enforcement corruption -- called the Oklahoma City detectives' approach "one of the most biased ways of approaching criminal investigation that (he'd) ever seen."

"You have detectives who have started with the notion that Mr. Holtzclaw is guilty," Turvey recounted, "searching through as many potential contacts as he's ever had" to confirm their narrative. Detectives weren't interested in pursuing other leads who matched accusers' descriptions. They were "just interested in making their case against Officer Holtzclaw. That's the definition of confirmation bias."

It's a major red flag, Turvey (whose most recent textbook is on false allegations) told me, "because the possibility that you're dealing with somebody who's falsely reporting the crime goes way up when you approach the case in this fashion."

Out of the eight remaining accusers' claims and alleged crime scenes, there were zero corroborating witnesses, and there was zero direct forensic evidence. The Oklahoma City Police Department's crime lab identified what it characterized as "epithelial cell" DNA from one lone accuser -- a troubled 17-year-old girl with a history of violent crime who called Daniel a "hot cop." Her trace DNA became the linchpin in the case.

At her lab in Carlsbad, California, Ryan showed me how Oklahoma City police crime lab analyst Elaine Taylor neglected to perform simple serological and forensic tests on Holtzclaw's uniform pants. She explained that Taylor did not use an alternate light source, "which is a very common practice" in sexual assault cases to detect saliva or vaginal fluid stains. Nor did Taylor conduct basic saliva tests (which she oddly told the jury she "refused" to do) or a presumptive vaginal fluid test, which Ryan demonstrated.

Ryan also noted how Taylor "incorrectly stated that no male DNA was present in two" of four DNA samples taken, "when in fact there was." The reason the error was so grave is that prosecutor Gayland Gieger (who has zero training in forensic science) used Taylor's false characterization to argue and bolster his own unscientific conclusion that because Holtzclaw's DNA was not found in the minuscule mixtures of multiple contributors, the DNA could have only gotten there through sexual contact via the teen accuser's vaginal fluid.

"Well, you can't say that," Ryan commented. "If you don't do a test for something, you can't make a statement like that. ... There was absolutely no body fluid identification," she told me. "It's not scientifically sound."

Moreover, in reaction to Gieger's mockery of transfer DNA at trial and Gregory and Davis's claims to me that it is "almost impossible" to transfer DNA indirectly, Ryan, who has worked as a DNA analyst for both public and private DNA labs and served as an expert witness in forensic serology and DNA analysis more than 100 times, forcefully responded:

Both Turvey and Ryan point to the incompetent mishandling of the evidence bag containing Holtzclaw's pants by Rocky Gregory (who is the son-in-law of forensic analyst Elaine Taylor) as a potential route for DNA transfer and contamination. While watching video of Gregory sticking his bare hand in the evidence bag, Turvey remarked:

Turvey and Ryan, who do not know each other and who have had no contact with Holtzclaw or his family, are two of six internationally renowned experts including Dr. Peter Gill who released a public report on scientific issues in Holtzclaw's case last summer. Because of systemic failures in the basic testing, handling, collection, analysis and interpretation of evidence, the scientists determined that Holtzclaw "was deprived of his due process right to a fair trial" and that his "conviction should be overturned and he should be given a new trial."

Scientific and ethical lapses before, during and after the Holtzclaw trial should raise alarm bells across forensic and investigative communities inside and outside the Sooner State. Repeated evasions of transparency by Oklahoma prosecutors and police brass about their handling of the Holtzclaw case should trouble criminal justice watchdogs on all sides of the ideological spectrum nationwide.