NFL Pigskins at the Public Trough

Michelle Malkin
|
Posted: Sep 27, 2017 12:01 AM
Share   Tweet
The opinions expressed by columnists are their own and do not necessarily represent the views of Townhall.com. 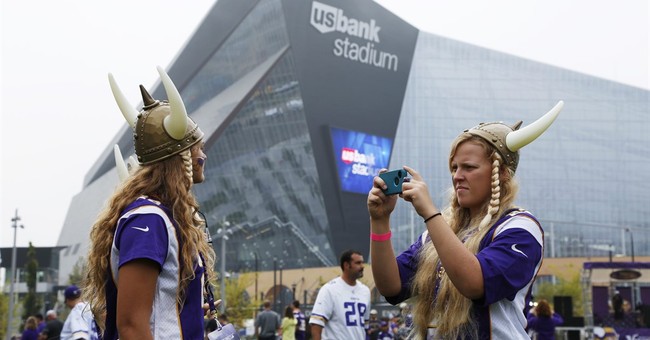 I'm calling foul on all the leftists rushing to protect the NFL's protest crusaders from President Donald Trump's criticism of their national anthem antics.

Their shabby line of defense? The NFL is a "private enterprise" whose "rights" are being violated by those who dare to challenge the league's political radicalization. The anti-Trump Democratic Coalition has even filed an ethics complaint alleging that the president's comments constitute a criminal violation against using government offices "to influence the employment decisions and practices" of a private entity.

Funny. These fair-weather friends of corporate free speech and the First Amendment were nowhere to be found when Boston Mayor Tom Menino and Chicago Mayor Rahm Emanuel were vowing to shut down Chick-Fil-A in their towns as government retaliation against the founders' private religious beliefs.

As for the NFL's status as a "private" enterprise? That's some Super Bowl-sized audacity right there. I first started tracking publicly subsidized sports boondoggles with my very first watchdog website, Porkwatch, back in 1999. Since then, taxpayers at all levels of government have foot the bill for football stadiums to the tune of an estimated $1 billion every year.

Over the past decade, new tax-supported NFL stadiums rose up for the Indianapolis Colts (the $720 million Lucas Oil Stadium), the Dallas Cowboys (the $1.15 billion AT&T Stadium) the New York Jets and Giants (the $1.6 billion MetLife Stadium, the Minnesota Vikings (the $1.1 billion U.S. Bank Stadium), the Atlanta Falcons (the $1.5 billion Mercedes-Benz Stadium), and the San Francisco 49ers (the $1.3 billion Levi's Stadium in Santa Clara).

Both political parties have supported massive redistribution of taxes from working people to the gridiron's spoiled 1-percenters. Public-private sports palace boosters employ the same bogus economic development math as the federal government's infamous Solyndra green energy loans, stimulus rip-offs and jobs programs. Citizens are promised an enormous multiplier of jobs and benefits in return for their "investments." But instead they've been saddled with a field of schemes.

Sports economists have concluded repeatedly that the effects of stadium subsidies on employment and economic activity are negligible -- or even negative. Scott Wolla of the St. Louis Federal Reserve reported earlier this year, "In a 2017 poll, 83 percent of the economists surveyed agreed that 'Providing state and local subsidies to build stadiums for professional sports teams is likely to cost the relevant taxpayers more than any local economic benefits that are generated.'"

Yet, the NFL, its teams and its sponsors continue to benefit from a bonanza of tax-free loans, municipal bonds, rent waivers and property tax exemptions. Congress provided the league with an antitrust exemption that protects its monopoly broadcasting rights. Localities have raided "emergency" funds to help pay for stadium construction. And corporate benefactors write off their expenses for luxury boxes, tickets and naming-rights purchases.

As long as the NFL has its hog noses buried in the taxpayer trough, I'll keep speaking up about all the football militants who backed former 49ers QB Colin Kaepernick and his disgusting cops-as-pigs socks.

You wanna raise your fists on the field? Get your grubby hands out of our pockets first.