Who Gets Absolute Moral Authority?

Michelle Malkin
|
Posted: Jul 20, 2016 12:01 AM
Share   Tweet
The opinions expressed by columnists are their own and do not necessarily represent the views of Townhall.com. 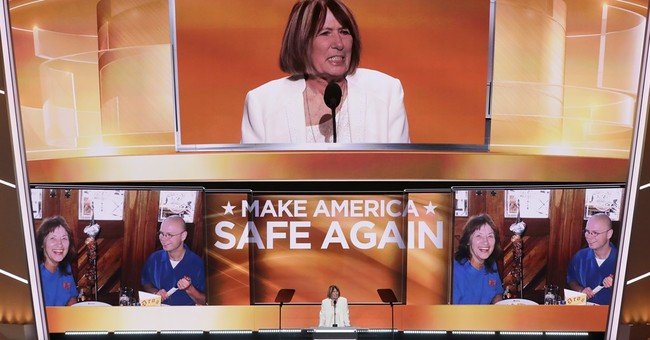 My 12-year-old son couldn't remember the phrase "take a walk down memory lane" last week, instead describing a stroll through "nostalgia road." I knew it would come in handy.

Put on your hiking boots and join me for an educational trip down good ol' nostalgia road.

It seems like yesterday when Champion of Wimmin Maureen Dowd, bemoaning the lack of sympathy for anti-war mom Cindy Sheehan, declared in The New York Times that "the moral authority of parents who bury children killed in Iraq is absolute."

No ifs, ands or other hedging qualifiers. Absolutely absolute.

And it was just a blink of an eye ago that the same New York Times spilled barrels of adulatory ink on the 9/11 widows known as the Jersey Girls. Remember them? The quartet of Democratic women parlayed their post-terror attack plight into powerful roles as Bush-bashing citizen lobbyists.

Their story, the lib narrative-shaping paper of record reported, was a "tale of a political education, and a sisterhood born of grief."

Moms and widows deserved special consideration in the public square, the argument went a decade ago. Their experience and their testimony warranted respect, deference and the national spotlight.

But then, as now, only a special class of victims is entitled to cash in the Absolute Moral Authority card. Not all parents and spouses who have lost loved ones can join the Club of the Unquestioned and Unassailable.

On Monday night at the Republican National Convention, Pat Smith shared her own tale of a political education born of grief after her diplomat son, Sean Smith, died in the Benghazi terrorist attack. Hillary Clinton, she passionately insisted, "deserves to be in stripes!"

GQ sports writer Nathaniel Friedman showed his compassion for Smith's loss and pain by tweeting, "I don't care how many children Pat Smith lost I would like to beat her to death."

MSNBC host Chris Matthews, who had helped make Cindy Sheehan a media star and urged her to run for Congress based on her status as a grieving war mom, fumed that Pat Smith had "ruined" the entire convention with her heartfelt testimony. The smug Democratic political operative turned TV bloviator, who had also elevated the Jersey Girls' celebrity status with multiple bookings on his show, couldn't bear to speak Smith's name:

"I don't care what that woman up there, the mother, has felt. Her emotions are her own, but for the country in choosing a leader, it's wrong to have someone get up there and tell a lie about Hillary Clinton."

Rep. Adam Schiff, D-Calif., chimed in on the same network that he was disgusted with how the GOP convention was using Smith to "exploit a tragedy."

GOP-bashers heaped similar derision on father Jamiel Shaw Sr. and mothers Sabine Durden and Mary Ann Mendoza, who all spoke at the convention about losing children to criminals who had slipped illegally through open borders and revolving deportation doors. "Progressives" sneered at Shaw as an "Uncle Tom" for pointing out that Latino gangbangers targeted his black son because of his race. The intolerant tolerance mob also accused Durden of being "fooled" and Durden and Mendoza of being "exploited for apocalyptic theater."

Will these horrified hang-wringers be as outspokenly offended next week when the Democratic National Convention dedicates an entire evening to the so-called Mothers of the Movement?

Each of these cases lumped under supposedly unjustified gun violence and systemic racism is complicated and distinct. For starters, Bland hanged herself when her friends and family wouldn't bail her out of jail after she had kicked a police officer. Two of the "children" involved in police shootings (Brown and Hamilton) had assaulted cops during their fatal encounters.

But drop all questions and doubts. "These mothers have worked tirelessly to raise awareness around the issues that surround their children's deaths," the liberal Huffington Post reports.

Because these women endorse race-baiting, gun-grabbing narratives and left-wing candidates, no one working in the mainstream media will ever challenge their parental prerogative to participate in politics on behalf of their loved ones.

Moms who have lost their children to Democratic incompetence, corruption and open-borders treachery are out of luck. The dealers of Absolute Moral Authority play with a loaded deck.