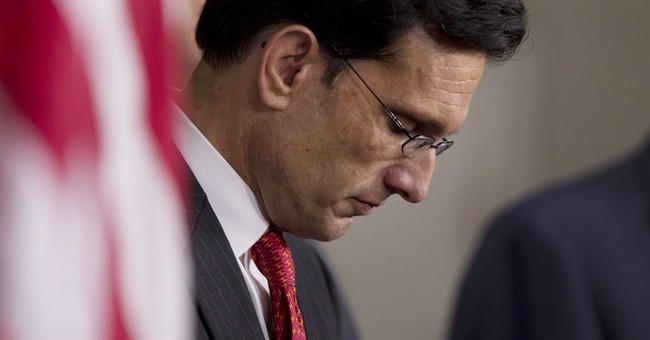 Ooouuuch. My sides are still aching after last week's comical announcement by GOP presidential candidate Jeb Bush that he had snagged the coveted endorsement of notorious electoral reject Eric Cantor, the former House majority leader kicked to the curb by disgusted voters in Virginia's 2014 primary election.

Newsflash to GOP elites: Getting Cantor's support is not like landing a prized marlin. It's like hooking one of those hideous bottom-feeding blobfish named the world's ugliest creature.

Inside the Beltway, The Washington Post reported, "Cantor remains well-liked and respected in the Virginia business community and among the Republican donor class in the commonwealth."

But outside the Beltway, the failed Republican revolutionary-turned-Wall Street influence-peddler is a snortle-inducing spectacle on both sides of the political aisle.

In Cantor's endorsement statement Thursday, he praised Bush as a "true conservative leader" who "can re-energize our nation and recapture our greatness." That's empty babble coming from the epitome of an out-of-touch, self-aggrandizing, revolving-door ruling class.

BushCantor share the same smug condescension toward Americans who believe in strict immigration enforcement and putting American workers first. Cantor fecklessly lied to voters during the campaign season about his position(s). He showered his district with anti-illegal immigration flyers that fraudulently portrayed him as standing up to President Obama on amnesty. But on Capitol Hill, he championed the DREAM Act for illegal alien students, huge H-1B visa increases to quench Big Tech's appetite for cheap foreign tech workers, and the U.S. Chamber of Commerce/AFL-CIO's collaboration on massive immigration expansions.

While Cantor lip-synced to the limited-government tea party message, he boogied in backrooms with his pork-barrel pals. He assailed Obama's bloated stimulus and then celebrated the high-speed rail boondoggles in his state funded by it. As a celebrated "young gun" on the right, Cantor preached fiscal responsibility, while blowing nearly $170,000 on fancy steakhouse dinners across the country in his last year in office.

One outside group, the American Chemistry Council, spent a whopping $300,000 on soft-money ads to protect Cantor -- an amount that exceeded Brat's entire campaign funding.

Likewise, while Bush fashions himself a champion of the American worker, he pompously pushes the Gang of Eight amnesty as the only "adult" plan in the room. While he poses as a champion of American parents, students and "school choice," he trashes activist moms and zealously crusades for failed Fed Ed rackets and data-mining schemes masquerading as "higher standards." And while he stumps for the ordinary American's "right to rise" through conservative principles, he has parlayed his political career into a multimillion-dollar collection basket from liberal special interests and corporate cronies who fund his Common Core advocacy -- including the Bill and Melinda Gates Foundation, the GE Foundation, Bloomberg Philanthropies, Intel and Pearson Education.

BushCantor seem to think everyone else will suffer from Sudden Election Amnesia Syndrome and grant big-spending, open-borders Republicans blanket amnesty for their betrayals. But what Brat told voters in Virginia about Cantor goes for voters nationwide as Bush flounders. "Eric Cantor doesn't represent you," Brat bluntly warned. "He represents large corporations seeking a never-ending supply of cheap foreign labor. He doesn't care about how this will affect your livelihood, your schools, your tax bills or your kids' chances of finding a job."

The disgraced seven-term representative from Virginia's affluent 7th district, who turned his back on grassroots constituents in favor of cashing in on power, now promises to work closely with Bush "as they chart a course to the White House."