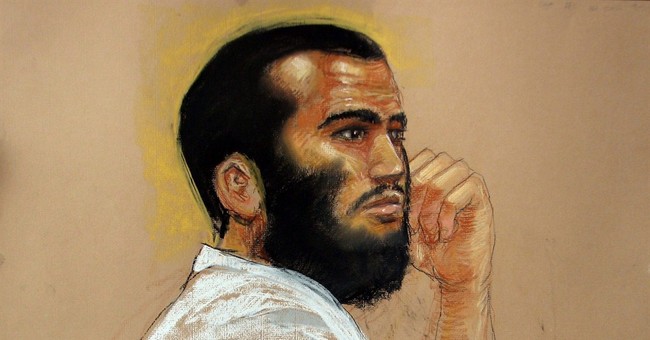 A Canadian judge ruled this week that Omar Khadr poses no public safety threat. Tell that to the children of Sergeant First Class Christopher J. Speer and the surviving American soldiers who valiantly fought Khadr on the battlefield.

In 2012, Khadr pleaded guilty, guilty, guilty, guilty and guilty to five charges related to the killing of Speer, a 28-year-old medic with the U.S. Special Forces. This young American hero died in Afghanistan in 2002 during an ambush by al-Qaida operatives. Just days before he gave his life, Speer had fearlessly walked onto a minefield to rescue two wounded Afghan children. It was Khadr, born and bred an Islamic jihadist by his terrorist father, who lobbed the fatal grenade in the war zone. Another American soldier, SFC Layne Morris, survived the attack, but was blinded in one eye for life.

In a sealed plea deal at Guantanamo Bay, Khadr admitted to throwing the grenade. He admitted to attempted murder, conspiracy, spying and providing material support to terrorism. He signed a 50-paragraph stipulation that classified him as an "enemy belligerent because he has purposefully and materially supported hostilities against the United States and its coalition partners" and documented his family's intimate association and friendship with al-Qaida leaders Osama bin Laden, Ayman al-Zawahiri and Muhammad Atef.

Don't believe the international human rights bleeding hearts. The Khadr family is rightfully known as Canada's First Family of Terror. This so-called "child soldier" and "good kid" was a full-blown Muslim soldier of jihad; he trained one-on-one in weaponry, explosives and Jew hatred. A then-teenage Khadr bragged to a U.S. official "that the proudest moment of his life was constructing and planting IEDs" to "kill U.S. forces."

Gloating over the Alberta judge's decision to let Khadr loose, his radical leftwing lawyer railed against Canadian Prime Minister Stephen Harper as a "bigot." His fan club thinks he deserves a medal. No, really. A Toronto Sun columnist argued last week that the jihadist "deserves some kind of recognition" along the lines of the country's "Order of Canada" for "the dignity and stoicism with which he's borne the mingy behaviour of Canada's governments."

Disgusting. This deification of an al-Qaida-trained murderer is a slap in the face to every American soldier and every military family that has sacrificed to combat Islamic jihad.

But don't look for our government to raise its voice in protest. It is because of jihad-coddler Barack Obama, working quietly to empty Gitmo, that Khadr found his way back to Canada in the first place. The White House surreptitiously released the killer and flew him home as American citizens were distracted by the 2012 midterm elections. Now, despite opposition from Canada's conservative government, Khadr's out on bail while appealing his U.S. war-crimes convictions.

The "progressive" Center for Constitutional Rights in New York City has been at the forefront of pressing for Khadr's release. CCR also crusaded successfully for the release of Gitmo jihadist Abu Sufian bin Qumu -- now the lead suspect in the bloody attack on our consulate in Benghazi -- whom the Obama administration has yet to bring to justice.

Retired Sgt. Morris, the blinded survivor of Khadr's grenade attack, sees more clearly than feckless apologists for Gitmo killers and recidivists. The cheerleaders for Muslim vigilantes "ignore the facts of Omar Khadr's life, his history and the terrible choices Omar Khadr made to get him to the spot he is in now," Morris told The National Post last week. "The Obama administration, in its zeal to shut down Guantanamo, is willing to make any sacrifice to empty that prison. Omar Khadr is simply the fortunate beneficiary of that tactic."

After 13 years in custody, Khadr will be breathing fresh air, walking the streets and maintaining his unrepentant pose of victimhood.

After 13 years, the real victims and the real children in this case -- the daughter and son of the real hero, SFC Speer, Taryn and Tanner -- will still be without a father.