The Fallon-ization of Freaky-Deaky Dunham and Lyin' Williams 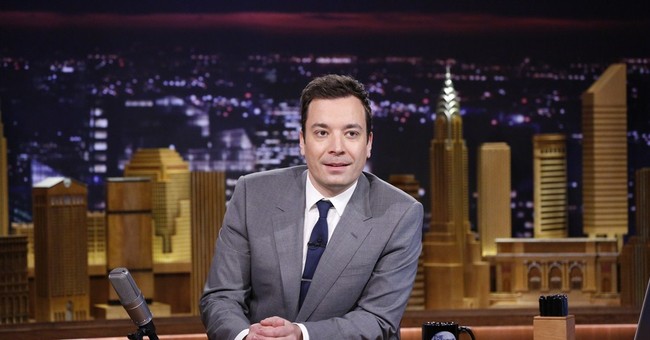 Comedian Jimmy Fallon is a celebrity fraud's best friend. He's an answer to normal America's question: How do creepy stars get away with their grotesqueries?

If you're lucky enough to sit by his late-night throne and join his cool-kid games, all your troubles will melt away. Funnyman Jimmy is not just a bread-and-circuses buffoon. He's the keeper of the pop culture immunity necklace.

Entertainment reporters and women's magazines dutifully gushed about Dunham's "fierce" doodling skills and "perfectly blended smoky eyes," but not a peep from any of them about Dunham's real-world lying game.

Behind the canned laughter and caked-on makeup lies the ugly truth: Dunham is a freaky-deaky fabulist and Hollywood deviant. After signing a hefty $3.5 million book deal with Random House, the hipster creator of HBO's "Girls" and her publisher were forced late last year to walk back bogus allegations about a "rape" attack by an "Oberlin College Republican" that she neglected to disclose for nearly a decade ... until she needed to generate book publicity.

Whatevah. Dunham's smoky eyes were "A+!" And did you see her Saint Laurent polka-dot dress?

This mindless pop culture cachet is an invaluable commodity to scandal-plagued celebrities of all kinds. It's why President "Slow Jam" Obama and first lady Michelle "Evolution of Mom Dancing" Obama have made Fallon's show a frequent pit stop.

Crisis management step one: Get thee to a late-night couch. It's a safe space for "progressive" prevaricators. Lefty comedians don't just serve as useful damage-control tools. They provide preemptive protection to their politically like-minded friends in the industry.

Take Brian Williams. For the past year, Fallon has inflated the NBC News anchor's hipster points by setting his newscasts to popular rap tunes ("Rapper's Delight," "Baby's Got Back," and "Gin and Juice," for example). The videos have all gone viral, vaulting Williams to pop icon status.

Mainstream media outlets have elbowed each other like One Direction concert fans in the VIP section to show their love for Williams. On Tuesday, Time magazine breathlessly urged readers to "Watch Brian Williams 'Rap' Snoop Dogg's 'Who Am I (What's My Name)?'" Esquire magazine gushed over the running gag, praising the anchorman's "flow." E Online exulted: "B. Dubs is just a cool dude!"

Outside the entertainment industry bubble, however, reality bites. American troops who were fed up with long-lyin' Williams busted his tall tale of being "fired on and forced down" in a military helicopter in Iraq in 2003. Williams has smoothly spread the "harrowing" bullcrap story far and wide multiple times over the years -- from NBC News to the "Late Show with David Letterman" to rageball actor Alec Baldwin's radio show. But when he repeated the lie at a New York Rangers hockey game this week in front of veterans who knew the truth, it was the last straw.

On Wednesday, Stars and Stripes quoted surviving crewmembers who were there. They said Williams had been flying in the back of a completely different copter and arrived on scene an hour after the damaged Chinooks had landed. Door gunner Mike O'Keeffe, who survived the RPG attack, told the military newspaper: "I can't believe he is still telling this false narrative."

Believe it. In his televised "apology" Wednesday night, the $10 million-a-year news anchor was still clinging to falsehoods. He cast his "mistake" of "misremembering" the incident as an innocently "bungled" attempt to "thank one special veteran" he had befriended -- neglecting to mention that he had cunningly embellished the self-aggrandizing story over the past 12 years.

But cool kids in the bizarro land of make-believe gotta stick together. As with Dunham, the infotainment establishment has invested too much in Williams to throw him under the bus.

Prediction: The bloviator NBC calls "one of the most trusted journalists of our time" will be back in Hollywood's good graces soon enough, getting his Fallon-ized cultural absolution through inane rap/news mash-ups.

Or perhaps a round of "perverted Pictionary" with "Leens."

'We Made a Mistake': San Francisco Restaurant Backtracks After Refusing Service to Police Officers
Townhall
Actor Rainn Wilson wants to know why those who refuse the vaccine are 'angriest' that the government hasn't fixed the problem
Twitchy
Jussie Smollett's Testimony About Don Lemon Shows What a Dumpster Fire CNN Is
Redstate
RUN AWAY! Democrats Fleeing Biden's Sinking Ship
PJ Media