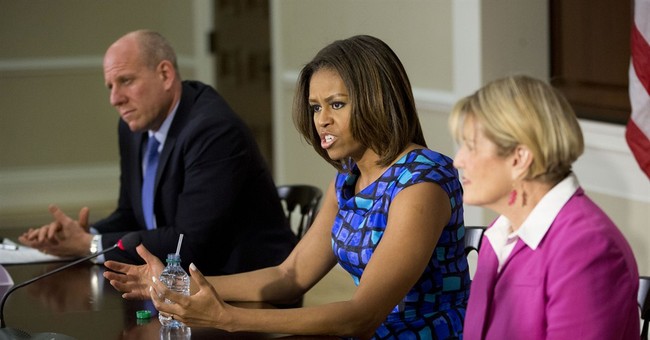 Barack and Michelle Obama are quite the diversionary tag-team. He blames everyone else for his problems. She takes credit for progress on his behalf that he doesn't deserve and distracts public attention from his avalanche of failures with endless feel-good photo-ops.

While the shirker in chief golfed and grubbed for money at closed-door celebrity fundraisers this week, his East Wing flak-catcher provided him cunning cover on the still-festering VA scandals.

Mrs. Obama flew to Los Angeles to declare a war or something on veterans' homelessness. At a summit with Los Angeles Mayor Eric Garcetti on Wednesday, she said the neglect of our men and women in uniform, abandoned on the streets after returning from battle, should "horrify all of us."

Of course, vet homelessness is a shame, and it should be eradicated. But the timing of Mrs. Obama's remarks -- not to mention her glaring omissions -- is calculated cynicism on Louboutins.

President Obama's human deflector sprinkled her remarks with various anecdotes about vets struggling to get back on their feet. But not once in her 2,700-word speech did Mrs. Obama mention the horrifying stories of veterans neglected, abused, manipulated and crushed by corrupt VA bureaucrats under her husband's administration.

Instead, she spent the rest of the speech bragging about "my husband" launching this initiative and that program to do right by the vets.

Various federal agencies live-tweeted the event; Mrs. Obama's fan base oohed and aahed. And the Veterans Affairs media relations and social media tracking teams undoubtedly high-fived each other as they tallied up the positive press.

Meanwhile, more whistleblowers who will never gain Mrs. Obama's public sympathy or accolades gave damning testimony about the "culture of corruption" at the VA. One told Capitol Hill lawmakers about how her car was dented after she reported manipulation of veterans' benefits claims in Philadelphia. Others were put on leave or harassed. "Retaliation culture is a cancer," said Dr. Christian Head, who was investigating time-card fraud inside the Greater Los Angeles VA Health Care System.

A new report by the VA inspector general provided more details of how bureaucrats made pending benefits cases vanish and mishandled or intentionally lost paperwork related to claims in a mad attempt to reduce the 600,000-case backlog. Linda Halliday, an assistant inspector general, ticked off all the new targets of investigative probes: Baltimore, Philadelphia, Los Angeles, Oakland, Houston and Little Rock, Ark.

Asked whether she believes in the integrity of data being supplied to her by VA officials, Halliday told the House Veterans Affairs Committee: "No. ... I don't want to say I trust them." Goodbye, hope and change. Hello, lying liars.

And how's this for horrifying: Yet another VA IG report released this week affirmed that the Baltimore VA "had inappropriately stockpiled about 8,000 documents" containing sensitive personal information and processed and unprocessed claims-related mail with the potential to affect benefits payments. "More than 9,500 documents and 80 claims folders lacked the oversight necessary to ensure timely claims processing," investigators said.

Translation: Feckless VA drones sat on their plump, worthless backsides while the desperate entreaties of our nation's best and bravest clogged their do-nothing desks.

The horrors of government ineptitude and malpractice are behemoth. The OIG also affirmed this week that the same kind of book-cooking happening across the country took place at Philadelphia VA offices. Staffers changed dates on old claims to make them look new. Whistleblowers exposed systematic document shredding and piles of veterans' unanswered correspondence stuffed in boxes and cabinets. Still to be probed: cherry-picking of claims to inflate performance; 32,000 unanswered electronic queries from veterans seeking information about their benefits claims; and duplicate payments being written off.

The first lady's Operation VA Scandal Distraction may have been a success for one day. But evasion-by-photo-op can't work forever.