Hide-and-Seek Hypocrites on the Hill 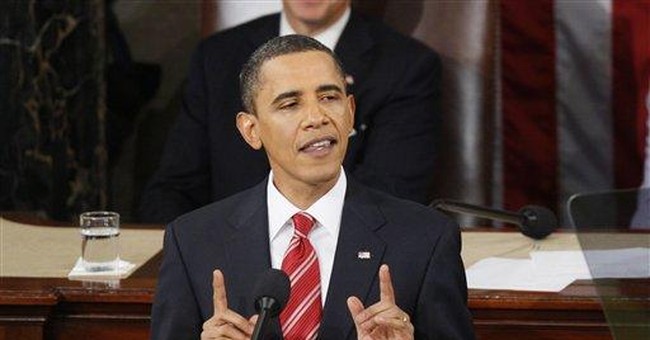 You know when a politician starts a sentence with "frankly," he's about to lie to your face. The same principle applies to campaign finance legislation dubbed the "DISCLOSE Act." The voter's instinctive reaction should be: What are they trying to hide now? Drafted out of public view with left-wing lobbyists and rammed through Congress after bypassing committee hearings, this bum bill would have been better named the CLOSEDDOOR Act.

At a Rose Garden press conference on Monday, President Obama decried the influence of "shadow groups" on elections and urged the Senate to pass the "reform" sponsored by N.Y. Democratic Sen. Chuck Schumer. But the loophole-ridden package exempts large nonprofits with 500,000 or more members. Behemoth labor unions get preferential treatment. Bradley Smith, former Federal Elections Commission chairman, noted that the law places radical speech-squelching restrictions on companies' ability to run independent political ads: "(I)f you're a company with a government contract of over $10 million (like more than half of the top 50 U.S. companies) or if you're a company with more than 20 percent foreign shareholders, you can't even mention a candidate in an ad for up to a full year before the election. ... There are no similar prohibitions for unions representing government contractors or unions with foreign membership."

GOP Sen. Mitch McConnell put it more starkly during Tuesday's debate before the Senate cloture vote on the bill: The DISCLOSE Act, he said, is a "transparent attempt to rig the fall elections." At bottom, McConnell diagnosed correctly, this is a jobs-protection bill for entrenched incumbents more interested in protecting their hides than protecting the Constitution. While the cloture vote fell three votes short of the needed 60 on Tuesday, Schumer vowed to resurrect the issue "again and again and again until we pass it."

In attacking Republicans who oppose this campaign finance Kabuki, Obama audaciously feigned alarm over the proliferation of fake grassroots groups with innocuous-sounding names. Special interests, he complained, "can hide behind a name like 'Citizens for a Better Future,' even if a more accurate name would be 'Companies for Weaker Oversight.'" Let me supply some more examples that won't appear on Obama's teleprompter anytime soon:

Or how about "Americans for Stable Quality Care"? That was the government health care takeover-promoting special interest coalition funded by Big Pharma, the AARP, AMA and the Service Employees International Union. The group pitched in $150 million for pro-Obama health care ads to create the illusion of grassroots support.

Or how about "Health Care for America Now"? That's the 1825 K Street-based "grassroots" lobbying conglomerate funded by radical liberal sugar daddy George Soros and the brass-knuckled, purple-shirted bosses of the SEIU.

Or how about "American Rights at Work"? That's the far-left, pro-Big Labor lobbying group that Obama's labor secretary, Hilda Solis, served as treasurer for while a congresswoman -- a position she failed to disclose while lobbying for the Big Labor card-check bill she was sponsoring at the same time.

Or how about the "American Public Policy Committee"? That's the umbrella group for Beltway-based union and progressive lobbyists run by D.C. money-shuffler Craig Varoga, who is now harnessing Washington bucks to attack tea party activists.

It's the president's biggest donors and advisers who perfected the art of Astroturf. Don't be so modest, man.

Team Obama and their allies on Capitol Hill have some nerve gnashing their teeth about transparency after two years of backdoor kickbacks, secret Big Labor deals, C-SPAN camera evasion, White House disclosure-ducking coffeehouse meetings, and sunlight-shirking holiday and midnight floor votes. And while they preached about America's right to know and posed as crusaders for open access, Democratic leaders in both the House and Senate continued to stonewall on public hearings for health care rationing czar Donald Berwick -- Obama's recess-appointed head of Medicare and Medicaid.

A White House spokesman called the battle over the DISCLOSE Act a "defining moment for the public." Nah. It's just another example of the Democratic majority's endless hide-and-seek hypocrisy.