How the Left Fakes the Hate: A Primer 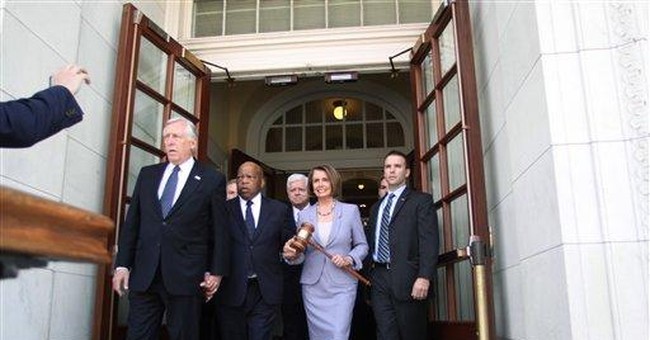 If you can't stand the heat, manufacture a hate-crime epidemic.

After years of covering racial hoaxes on college campuses and victim sob stories in the public arena, I've encountered countless opportunists who live by that demented mindset. At best, the fakers are desperately seeking 15 minutes of infamy. At worst, their aim is the criminalization of political dissent.

Upon decimating the deliberative process to hand President Obama a health care "reform" victory, unpopular Beltway Democrats and their media water-carriers now claim there's a Tea Party epidemic of racism, harassment and violence against them.

Yet, the claims that Tea Party activists shouted "nigger" at black House Democrats remain uncorroborated. The coffin reportedly left outside Missouri Democratic Rep. Russ Carnahan's home was used in a prayer vigil by pro-life activists in St. Louis protesting the phony Demcare abortion-funding ban in Obama's deal-cutting executive order. Videotape of a supposed intentional spitting incident targeting Missouri Democratic Rep. Emanuel Cleaver at the Capitol shows no such thing. Cleaver himself backed off the claim a few days later. He described his heckler to The Washington Post in more passive terms as "the man who allowed his saliva to hit my face." Slovenliness equals terrorism!

The FBI is now investigating the most serious allegation -- that Tea Party activists in Virginia are somehow responsible for a cut gas line at the home of Democratic Rep. Tom Perriello's brother. But instead of waiting for the outcome of that probe, liberal pundits have enshrined the claim as conclusive evidence of the Tea Party reign of terror.

Need more reasons to treat the latest Democratic hysteria with a grain of salt the size of their gargantuan health care bill? Remember:

-- In November 2009, Kentucky census worker Bill Sparkman was found dead in a secluded rural cemetery with the word "Fed" scrawled on his chest and a rope around his neck. The Atlantic Monthly, Huffington Post and liberal media hosts stampeded over themselves to blame Fox News, conservative blogs, Republicans and right-wing radio. Federal, state and local authorities discovered that Sparkman had killed himself and deliberately concocted a hate-crime hoax as part of an insurance scam to benefit his surviving son.

-- In mid-October 2008, news outlets from Scranton, Pa., to ABC News to the Associated Press and MSNBC reported that someone at a Sarah Palin rally shouted "kill him" when Obama's name was mentioned. In fact, the Secret Service (which was at the event in full force) couldn't find a single person to corroborate the story -- other than the local reporter for the Scranton Times-Tribune who made an international incident out of the claim. Agent Bill Slavoski "said he was in the audience, along with an undisclosed number of additional secret service agents and other law enforcement officers, and not one heard the comment," the paper reported in a red-faced follow-up. Maybe the shouter is hiding with Nicole Simpson and Ron Goldman's real killer.

-- In late October 2008, a gaggle of liberal blogs spread the rumor that a Republican supporter of vice-presidential candidate Sarah Palin's had shouted that Obama was "a nigger" during a campaign rally in Iowa. Video and firsthand accounts showed that the protester did not shout "he's a nigger," but "he's a redistributor." A lefty activist at the "progressive" Daily Kos blog confirmed the truth -- but to this day, the crisis-manufacturing smear stands uncorrected and unretracted across the Internet.

-- In September 2009, supporters of Colorado Democratic Rep. John Salazar falsely accused a town hall protester of hurling a death threat at the congressman. Liberal blogs again disseminated the angry Tea Party mob narrative. A week later, the local press quietly reported that Grand Junction police had investigated the incident -- and determined the claim was "unfounded." A police spokeswoman revealed that "(p)eople who witnessed the interaction between the man who made the complaint and the suspect confirmed they never heard any direct threats made regarding Congressman Salazar." Witnesses included a Grand Junction cop "in close proximity when the interaction took place."

-- In late August 2009, as lawmakers faced citizen revolts at health care town halls nationwide, the Colorado Democratic Party decried a vandalism attack at its Denver headquarters. A hammer-wielding thug smashed 11 windows and caused $11,000 in property damage. The perpetrator, Maurice Schwenkler, turned out to be a far-left nutball/transgender activist/single-payer anarchist who had worked for an SEIU-tied 527 group and canvassed for a Democratic candidate. Nevertheless, Colorado Democratic Party Chair Pat Waak continued to blame "people opposed to health care" for the attack.

Then, as now, being a Democratic Party official means never having to say you're sorry for smearing conservative dissent.