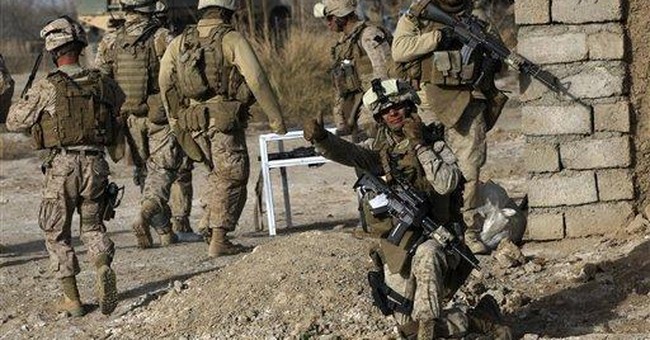 It's bad enough that John Brennan, President Obama's national security deputy, thinks Gitmo jihadi recidivism is "not that bad." But in his talk last week with Islamic law students at New York University, Brennan made even more reckless comments about our counterterrorism programs while pandering to one of the worst Muslim grievance-mongers and sharia peddlers in America.

During the question-and-answer session, Brennan welcomed a question from Omar Shahin. He identified himself as the head of the "North American Imams Federation." What he didn't mention was his role as the chief ringleader of the infamous flying imams. You remember them: They were the six Muslim clerics whose suspicious behavior -- provocatively shouting "Allahu Akbar!" before boarding the plane, fanning out in the cabin before take-off, refusing to sit in their assigned seats, requesting seat-belt extenders, which they placed on the floor -- led to their removal by a U.S. Airways crew in 2006.

In coordination with the Council on American-Islamic Relations, Shahin and his radical delegation attempted to shake down the airline with a discrimination lawsuit and bully the citizen "John Does" who flagged the imams' security-undermining behavior. CAIR mouthpiece Ibrahim Hooper blasted "anti-Muslim hysteria" by those who saw something and said something about the imams' in-flight shenanigans. Shahin ranted in a teleconference strategy session in 2007 that, indeed, he and his cohorts were spoiling for the incident and planning to engineer "many, many cases" to sabotage airline security efforts.

As head of the Islamic Center of Tucson in Arizona (home to past jihadi dry-run plotters), Shahin preached that his followers must put Islamic sharia law above Western laws. He told the Arizona Republic that he doubted Muslims were behind the 9/11 terrorist attacks, concluding: "All of these, they make it up." Brennan didn't appear to know who Shahin was. Somebody around him should have briefed him. Shahin's involvement in Hamas-linked charities and radical Wahhabi "youth groups" has earned the Jordanian-born naturalized citizen increased FBI scrutiny over the years.

Instead, Brennan treated him as just another innocent Muslim with "reasonable" concerns about the government. "We came to this country to enjoy freedom," Shahin began with faux, flag-waving emotion. "We feel that since September 11, we aren't enjoying these values anymore. … Also, we feel that there's a big lack of trust between Muslims' community and our government. … My question: Is there anything being done by our government to rebuild this trust?"

Instead of countering the narrative, exposing Shahin's true intentions and vigorously defending America's homeland security apparatus, Brennan dutifully genuflected to the gods of political correctness. Obama, he told the militant 9/11 inside-job theorist and jihad white-washer, is "determined to put America on a strong course."

No, not a "strong course" that includes national security profiling of Islamic radicals pretending they care about our country's best interests. By "strong course," Brennan assured Shahin, he meant a course toward assuaging the civil rights groups who have objected to every security program at airports, borders, train stations and visa offices for the past nine years.

Brennan told Shahin that the post-9/11 response of the Bush administration was a "reaction some people might say was over the top in some areas" (insert indignant grievance-monger nodding and mmm-hmming here), and that "in an overabundance of caution, (we) implemented a number of security measures and activities that upon reflection now we look back, after the heat of the battle has died down a bit, we say they were excessive, OK."

It gets worse: Brennan then went on to decry the "ignorant feelings" of Americans outraged at the jihadi attacks on American soil. And then he told Shahin and the audience of Muslim students that he "was very concerned after the attack in Fort Hood as well as the December 25 attack that all of sudden there were people who went back into this fearful position that lashed out not thinking through what was reasonable and appropriate."

The Fort Hood jihadist slaughtered 14 innocent soldiers and an unborn baby after an Army career of openly threatening the lives of our soldiers, and Brennan is wringing his hands about the rest of us "lashing out" over government incompetence. He believes our true sin is not in the systemic underreacting by the military, homeland security, intel and White House officials in charge, but in the "overreacting" of the American public.

With clueless capitulationists like Brennan in charge of our safety, who needs enemies?