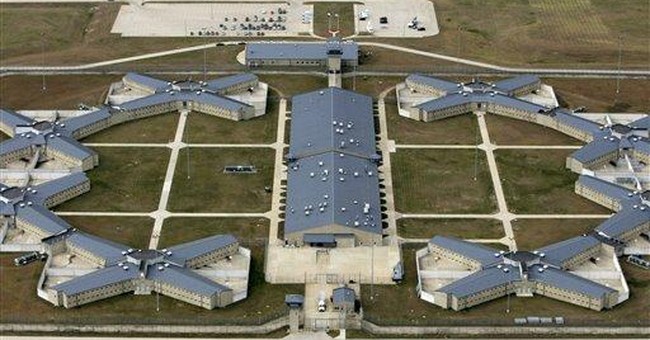 President Obama's hometown cronies lost their bid to bring the 2016 Olympic Games to the Windy City. But this week they got a consolation prize: the Gitmolympics. On Tuesday, the White House went public with its official plans to purchase the Thomson Correctional Facility from financially strapped Illinois to house Guantanamo Bay detainees. The War on Terror meets the Chicago Way.

And co-chairing the bid to bring suspected jihadis to American soil: beleaguered Illinois Gov. Pat Quinn (D), who is salivating at the prospect of an estimated $1 billion injection into the local economy over four years. (Never mind that the jobs predictions from the Council of Economic Advisers use the same fuzzy math methods that gave us bogus porkulus numbers.)

Sensibly, the people of Illinois who will have to live with this raw deal aren't waving their pompoms. A Rasmussen poll shows that 51 percent of voters in the state oppose the transfer of suspected terrorists from the Cuban detention facility to their backyard -- including 70 percent of Republicans, 37 percent of Democrats and 57 percent of independents.

Left-wing advocates of closing Gitmo accuse these Americans of "NIMBYism" and groundless fear. But can you blame anyone who watched the Crashergate debacle at the White House or the Scare Force One debacle in New York City for choking on disbelief when Team Obama promises airtight safety, security and competence?

Moreover, Illinois is already suffering its own severe prison-overcrowding crisis -- which Quinn has alleviated by secretly releasing more than 850 inmates, including violent offenders, since September, according to the Associated Press.

GOP gubernatorial candidate Dan Proft pointed out that "the state's 28 current prisons are 32 percent over capacity. Why not alleviate the overcrowding and bring the Thomson prison online" for existing criminals instead of importing them from abroad? Kirk Dillard, another Republican candidate, blasted Quinn's fiscal desperation: "I think al-Qaida needs to stay in Cuba. It shows how pathetic the state of Illinois' finances are, where we have to stand with our hat in hand and have the federal government give us money to open a penitentiary that the Democrats have let sit vacant for years."

Obama officials stress that the prison would house Gitmo detainees separately from federal inmates, and that the two would be "managed separately" with "no opportunity to interact" between them. Which entirely misses the point that Gitmo detainees' lawyers and translators have been the primary security concerns -- not just other inmates:

-- Last month, jihadist-enabling lawyer Lynne Stewart was finally ordered to jail after her conviction in 2005 for aiding and abetting imprisoned blind Egyptian sheik Omar Abdel Rahman by smuggling coded messages of violence to terrorist followers abroad -- in violation of an explicit pledge to abide by her client's court-ordered isolation.

-- Earlier this summer, the Justice Department launched an inquiry into photographs of undercover CIA officials and other intelligence personnel taken by ACLU-sponsored researchers assisting the defense team of Guantanamo Bay detainees. The pictures of covert American CIA officers -- "in some cases surreptitiously taken outside their homes," according to the Washington Post -- were shown to jihadi suspects tied to the 9/11 attacks in order to identify the interrogators.

-- As investigative journalist Paul Sperry reported recently, a number of Arabic and Pashtu interpreters who served at Gitmo are "under active investigation for omitting valuable intelligence from their translations of detainee interrogations, among other security breaches."

The corruptocratic Attorney General Eric Holder is, of course, in no position to raise any principle objections to the Gitmo-in-the-heartland plans. Remember: He served as senior partner with Covington and Burling -- the prestigious Washington, D.C., law firm that represents 17 Yemenis currently held at Gitmo. And top attorneys at his Justice Department have had to recuse themselves numerous times over their conflicts of interest in Gitmo-related cases. Holder has failed to provide a full recusal list of all the Gitmo detainee cases from which current Justice Department political appointees have had to recuse themselves.

Meanwhile, Team Obama is now championing the very same indefinite detention powers for detainees deemed untriable that it condemned the Bush administration for exercising -- and for which it targeted Gitmo for closure in the first place. Give the White House a gold medal for costly incoherence and reckless redundance.