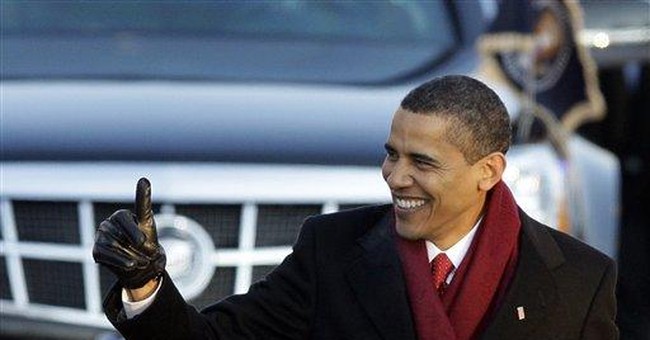 "The time has come," President Barack Obama told us in his inaugural address, "to set aside childish things." He borrowed the line from Corinthians. With the Beltway bread-and-circus show over, President Obama will now get to work on borrowing hundreds of billions of dollars from you, your children and your grandchildren for a doomed fiscal stimulus.

The CBO analysis showed that "less than half of the $30 billion in highway construction funds detailed by House Democrats would be released into the economy over the next four years" and "less than $4 billion in highway construction money would reach the economy by September 2010," according to the Associated Press. And those are generous time estimates given the reality of molasses-slow bidding and contracting processes -- bogged down by the usual weight of political wrangling, racial bean-counting and assorted union grievance-mongering.

Just $26 billion out of the $274 billion set aside in the package would reach the economy by the end of the year, the CBO found. That's a mere 7 percent. Moreover, the AP summed up: "Just one in seven dollars of a huge $18.5 billion investment in energy efficiency and renewable energy programs would be spent within a year and a half."

The other incontrovertible truth about this massive wealth transfer is that Washington cannot stop the inevitable lard-up. The original concept of spending on "roads and bridges" has morphed into spending on anything and everything that moves or can be moved. Every moocher in the marketplace wants his grubby paws on the money. And if his or her provision isn't already written into the Democrats' legislation, it will get slipped in under the cover of night.

To wit: Public radio and public television -- already funded with your money to the tune of some $400 million in direct federal handouts and tax deductions for contributions made by individual viewers, not to mention untold state grants and subsidies -- are demanding a hugetastic chunk of the stimulus pie. That's right: Government-supported NPR and PBS want even more of a bailout than they've lived off of for the last 40 years. According to Current.org, which covers public TV and radio, the two entities along with the Corporation for Public Broadcasting have petitioned Obama for $550 million in funding to help create more workers suckling on the public teat.

Watching TV is apparently critical to rescuing the American economy. Already stuffed into the Democrats' package is a $650 million bailout -- call it the Boob Tube boondoggle -- to pay for $650 million worth of digital TV upgrade coupons in the wake of the official, government-mandated transition to digital television next month. Not to be left out, the National Endowment for the Arts is on the Santa stimulus list for an additional $50 million cash injection. Oh, and there's another $50 million earmarked "to make up for a lack of philanthropic support for the arts." A breakdown of the spending by House Minority Leader John Boehner's office found an additional $6 billion in buried stimulus treasure for colleges and $166 billion in direct aid to states looking for taxpayers to save them from their profligate spending.

A few conservative Democrats have started murmuring about this looming fiscal nightmare. North Carolina Rep. Heath Shuler expressed concern about the porkification of the bill: "This can't be a Christmas tree." Sen. Kent Conrad told Bloomberg News that "his committee projects the plan will reduce the unemployment rate by 'maybe' 1 percent, or about half of the 3 million jobs Obama has said the plan would generate."

Wake up, taxpayers: This nearly $1 trillion plan is nothing but future-mortgaging ornaments and tinsel boxed in self-delusion. It is time, as President Obama lectured us, to put away childish things -- starting with this epic fail.

Darkness at Dune: The Nightmare of Martha's Vineyard
Townhall
Tweeter risks wrath of some of America's most privileged lib journos in order to expose their efforts to hide their backgrounds from the public; UPDATED
Twitchy
Biden Drops a Whopper About DeSantis and a Mafia-Like Comment That Has People Talking
Redstate
5 Years After Las Vegas Concert Shooting, an FBI Whistleblower Reveals Probable Motive
PJ Media