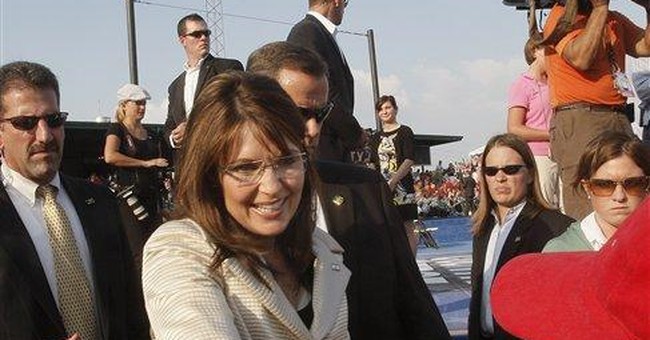 There's something about outspoken conservative women that drives the left mad. It's a peculiar pathology I've reported on for more than 15 years, both as a witness and a target. Thus, the onset of Palin Derangement Syndrome in the media, Democratic circles and the cesspools of the blogosphere came as no surprise. They just can't help themselves.

Liberals hold a special animus for constituencies they deem traitors. Minorities who identify as social and economic conservatives have left the plantation and sold out their people. Women who put an "R" by their name have abandoned their ovaries and betrayed their gender. As female Republican officeholders and female conservative public figures have grown in number and visibility, so has the progression of Conservative Female Abuse. The astonishing vitriol and virulent hatred directed at GOP Alaska Gov. Sarah Palin is the most severe manifestation to date.

The first stage of Conservative Female Abuse by the left is infantilization. Right-wing women can't possibly believe what they say they believe about the sanctity of life, self-defense, free markets or foreign policy. They must be submissive little dolls of the White Male Hierarchy. Or, as a far-left (Is there any other kind of left in San Francisco?) San Francisco Chronicle columnist wrote of first lady Laura Bush, they must be put in their place as "docile doormats" with no brains of their own. True to form, no sooner had John McCain announced Gov. Palin as his veep pick than jeers of "Palin = neocon puppet" sprouted across the Internet.

The second stage of CFA is sexualization. A conservative woman is not merely a sellout. She is an intellectual prostitute. Unable or unwilling to argue with them on the merits, detractors resort to mocking the physical appearance of their ideological opponents in skirts and denigrating them with vulgar epithets. MSNBC hosts insulted former GOP presidential candidate Fred Thompson's accomplished wife and mother of two, Jeri Thompson, as working the stripper pole. Newspaper cartoonists Ted Rall, Pat Oliphant and Jeff Danziger have caricatured Secretary of State Condoleezza Rice, including as a mammy, thick-lipped parrot and a Bush "House nigga" armed with "hair straightener." New York Times columnist Maureen Dowd derided former Florida Secretary of State Katherine Harris, a Republican, for applying "her makeup with a trowel."

True to form, Dowd was first out of the box to snicker at Gov. Palin's beauty pageant past, ridicule her "beehive and sexy shoes" and compare her path to the vice-presidential nomination as a "hokey chick flick." Joe Biden backhandedly praised her as "good looking." And left-wing bloggers worked overtime on lurid Photoshops of Palin as a bikini model and porn star. At the Democratic Underground, a highly trafficked liberal website raising money for Barack Obama, members held a contest to come up with nicknames and posters to slime GOP Alaska Gov. Sarah Palin -- and then to "spread [them] all over the 'Net." Among the nicer entries: "Cruella," "Gidget," "Governor Jesus Camp," "VPILF," "Fertilla the Huntress," "Iditabroad" and "KILLER PYSCHO FUNDIE B***H FROM HELL!!"

The third stage of CFA is demonization. When the left tires of hurling whore insults, it turns conservative women in the public eye into nefarious creatures. Bill Maher called Laura Bush "Hitler's dog." George Carlin attacked Barbara Bush as "the Silver douche bag." A Huffington Post website member wrote of Nancy Reagan: "Like her evil husband, she has lived far too long. Here's hoping the hag suffers for several weeks, then croaks in the tub." Another commenter added: "I feel no pity for the bitch who took delight in watching thousands die of a horrible disease and watching the poor having to eat out of dumpsters because of her husband's political beliefs."

True to form, rumors of Palin being a crypto-Nazi surfaced on the Internet and in the fringe media. And liberal critics used her gun-rights record to smear her as bloodthirsty.

The final stage of CFA is dehumanization. Conservative women aren't real women according to the liberal feminist establishment's definition. Remember when Gloria Steinem called Texas Republican Sen. Kay Bailey Hutchison a "female impersonator"? Or when curdled NOW leader Patricia Ireland instructed Democrats to vote only for "authentic" female political candidates? Or when Al Gore's fashion consultant Naomi Wolf described the foreign-policy analysis of Jeane Kirkpatrick as being "uninflected by the experiences of the female body"?

Echoing the bottom-feeders in the liberal blogosphere, mainstream journalists and Obama water-carriers now question Palin's commitment to motherhood and even challenge her prenatal care decisions in an effort to destroy her. Forget about questioning their patriotism. I question their sanity.