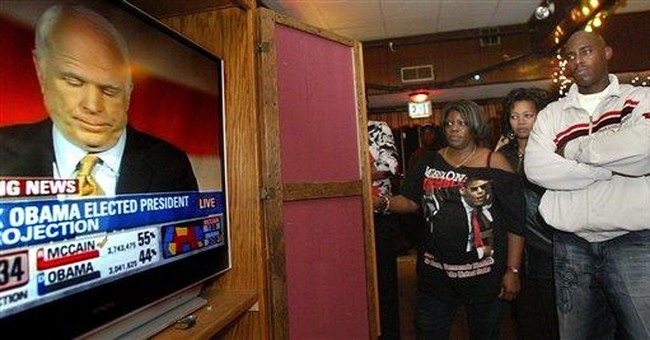 Senator Barack Obama will be our next president. He is the man of the hour, the focus of attention in America and around the world. Almost entirely forgotten is Senator John McCain. But Senator McCain, though the loser in the vote on November 4, remains a winner. He won’t be president, but his worthy service to the nation will continue.

We all know Senator McCain’s biography. A naval officer in a line of naval officers. A prisoner of war who suffered greatly for his country. A member of Congress and the Senate with a reputation for straight talk. To that he has added an honorable presidential campaign conducted against great odds.

Senator McCain decided to run in an election stacked against any Republican. Last year, he was given up for politically dead. Rather than get out, as recommended by the “punditocracy” he fought back. And he won. Former Mayor Rudy Giuliani capitalized on his handling of 9/11 in New York City. Governor Mitt Romney spent tens of millions of dollars of his own money. Governor Mike Huckabee energized social conservatives. But Senator McCain beat them all.

Still, the general election was a long-shot for any Republican. Senator Obama was a media darling and political phenomenon. The GOP was outgunned financially. President George W. Bush was the most unpopular president since polling began. But Senator McCain did not give up. Instead, he surprised everyone by knocking on our so-called political glass ceiling by choosing Governor Sarah Palin as his running mate. This one act rejuvenated his campaign, giving him a lead in the polls after the Republican convention.

Caught at a disadvantage with the implosion of Wall Street, Senator McCain nevertheless refused to stoop to gutter politics. He ruled out attacking Senator Obama based on his connection to Reverend Jeremiah Wright. He decreed that there would be no attacks on Michelle Obama. Senator McCain refused to allow ads attacking Senator Obama for not serving in the military. His campaign killed proposed ads attacking Obama for being soft on crime (a la Willie Horton), using children to question Obama’s willingness to fight terrorism, and showing the “celebrity” Obama dancing with a very white Ellen DeGeneres. Nor did Senator McCain ever play the anti-Muslim or anti-race card.

Senator McCain even made a genuine, if ultimately hopeless, pitch for votes from African-Americans. He spoke at both the NAACP and Urban League conventions and, on a special trip to Memphis, where Martin Luther King, Jr. was murdered, apologized for voting against making Dr. King’s birthday a holiday.

In his campaign, like the rest of his career, Senator McCain put his country first.

Now John McCain will return to the Senate, where he has much to do. With its ranks badly depleted, the Senate GOP caucus needs tough yet principled leadership. Senator McCain can be a moral, if not the formal, Republican leader.

He is well-positioned to lead the fight against any attempt at over-reaching by his erstwhile opponent. For instance, Senator McCain emphasized the importance of resisting counterproductive tax hikes on those who are most productive economically. He should take up the cudgels against any Democratic attempt to foment class war.

Even more important, Senator McCain has the credentials and credibility to insist that the Obama administration and enhanced Democratic congressional majority protect U.S. security. Although Americans preferred Senator Obama to Senator McCain on economic issues, they consistently believed that Senator McCain would make a better commander-in-chief. That gives Senator McCain a bully pulpit from which to speak.

However, Senator McCain has the ability to be a conciliator as well as a member of the loyal opposition. One reason he had more appeal to independent voters than the other GOP candidates was because he was willing to extend his hand across the aisle.

The problems that we face, from rebuilding our financial system to managing an American withdrawal from Iraq to combating terrorism, are complex and contentious. They can be best resolved through a bipartisan effort that puts country before party, something Senator McCain is almost uniquely qualified to promote.

On November 4, America had two worthy choices for president. A good man won; another one lost. The latter happened to be Senator McCain. Rather than toss him aside, America should seek his continued counsel. He is a leader and a man of honor. The nation needs his service as long as he is willing to serve.