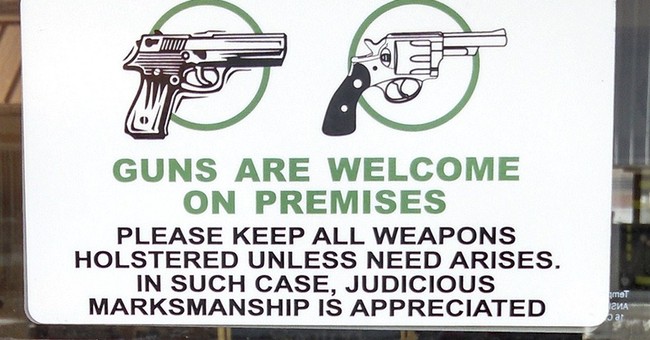 It’s nice to see that New New York (Colorado) still has a handful of anti-Bloombergs among them. A survivor from the 1999 Columbine school shooting is now pushing for relaxed carry restrictions on public school property. Colorado State Representative Patrick Neville, who saw the carnage of the Columbine massacre first hand, is introducing legislation that would eliminate the “gun free zone” among the state’s schools. According to The Hill:

“As was the case in 1999, criminals aren’t deterred by a flashy sign on the door,” Neville said. “The only thing that is going to stop a murderer’s intent on doing harm is to give good people the legal authority to carry a gun to protect themselves and our children.”

Of course, the anti-gunners who pushed for universal background checks, high capacity magazine bans, and an overall Bloombergfication of Colorado are outraged… Obviously guns are the problem, right? I mean, this is why victims of mass shootings never call the police: More guys with guns will only exacerbate the situation. Right?

To be fair, letting good guys with guns carry on public school property won’t bring an end to all the risks posed by our violent modern society. And yet, it seems to be the only thing that has worked in the past. (Believe it or not, people don't generally call the cops because of their dashing good looks.) As Neville rightly points out, this isn’t a Bill about allowing guns to mix with school kids… It’s a Bill to allow responsible law abiding adults the legal authority to carry the tools necessary to protect the lives of our children.

Unfortunately, the Bill is likely doomed already. The State House is still controlled by the hoplophobic Democrat Party, and they’re unlikely to give “common sense” gun laws a chance. They’d rather stick a few more “no guns” signs up, and hope that murderous psychopaths suddenly feel inclined to submit to the will of gun-shy regulators and lawmakers.

Although… A recent Quinnipiac poll found a surprising amount of support for the idea of allowing lawful concealed carry on school property. (Almost 50 percent.) Thirty percent of respondents agreed that arming teachers and administrators would be the best way to curb gun violence in America’s schools.

Roughly 38 percent of respondents, however, said that metal detectors would be most effective at reducing gun violence in schools… Because, obviously, an annoying siren and some flashing red lights will encourage a potential mass murderer to rethink going through with his incipient crime. (At least an armed teacher is likely to shoot back at a would-be madman.) And as an added bonus, we’ll all have to empty our pockets, remove our car keys, and hand over our cell phones whenever we wander onto campus. I know I’ll feel safer being keyless, disarmed, and phoneless, if some psycho with an AK waltzes through the metal detector. </SarcasmFont End>

Sadly, about 21 percent say they want stricter gun laws to curb potential Columbine reenactments. Maybe we should outlaw killing little kids? Perhaps a few “no-massacre” signs would be effective? Or perhaps we could just pass some sort of a law stating that mass murders must first register with authorities before attempting their rampage…

Neville, on the other hand, has correctly identified the problem:

“Parents wake up every day and bring their children to school on blind faith that their kids will return home safe. Unfortunately the current system continues to leave our children as sitting targets for criminals intent on doing harm.”

The problem isn’t lack of signage, inadequate regulation, or the lack of invasive 4th Amendment infringements… The problem is that evil does exist, it generally doesn’t care too much about obeying the law, and we currently have mounted no actionable defense against it. After all, the cowards who decide to shoot at unarmed children aren’t really looking for a fight. Let’s stop pretending that laws alone prevent crime, and start discussing what level of force is needed to defend the defenseless.

Unfortunately the Democrat Party is unlikely to let good guys with guns anywhere near school property anytime soon… Unless, of course, it’s a cop who is responding to the next school shooting.