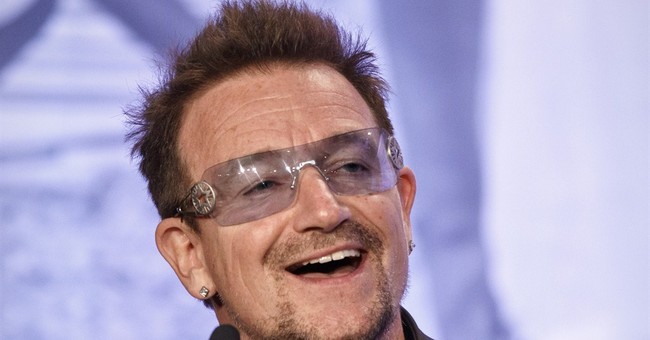 The self-proclaimed “Robin Hood of Rock” is beginning to sound a little more like Grover Norquist than a traditional pop-culture leftist. The U2 frontman, Bono, recently praised Ireland’s extraordinarily low tax rate, while claiming that the move has brought unparalleled prosperity to the Emerald Isle. According to the UK Independent, Bono boasted about the tax-policy’s ability to bring wealth to Ireland for the first time in centuries:

“We are a tiny little country, we don’t have scale, and our version of scale is to be innovative and to be clever, and tax competitiveness has brought our country the only prosperity we’ve known.”

He even managed to point out that the increased economic growth has boosted social services and government functions throughout the region:

Because of its generous tax allowances, he added, Ireland has reaped the benefits of “more hospitals and firemen and teachers”.

And he’s quite right. In his quest to rid the world of poverty, it’s nice to see that Bono is not blinded by some sort of ideological stubbornness to “progressive” initiatives. After all, the tens of thousands of jobs that migrated to Ireland (in a quest to seek marginally more favorable tax conditions) had quite a beneficial impact on local communities, families, and anti-poverty programs. I mean, sure, it seems obvious; but when billions of dollars start flooding into Ireland, it tends to help their overall economic condition.

Of course, most of this is old news to economists named Art (who drew a “Laffer” curve on a cocktail napkin) and students of the Austrian school. But, it’s still pretty impressive when the self-styled “Robin Hood” of pop-culture stumbles across economic enlightenment. Increased economic activity (and by extension, economic growth) is a boost to everyone in the community.

Not only are tens of thousands of people finding themselves with newfound wealth, but their newly-acquired spending habits are enriching those around them. And, regardless of their low tax rate, the government coffers are seeing an uptick in revenue, due to the velocity of money picking up in the increasingly dynamic economy. After all, we’re not just talking about Apple moving a few thousand jobs to Cork, but international giants of all industries are eyeing Ireland for their corporate headquarters.

Capitalism as it turns out, is a rather effective anti-poverty program. Which pretty much explains why Bono is defending a “controversial” anti-tax government. He’s made a name for himself in philanthropic circles for doing everything in his power to combat poverty. And, to be fair, his quest has not been one long parade of bleeding-heart liberalism. In 2003 he won a Nobel Peace Prize for his efforts to alleviate world debt; and he’s even gone out of his way to praise the efforts George W Bush made to combat Aids in Africa.

I guess it only makes sense that he finally identified capitalism for what it truly is: The world’s most highly effective anti-poverty program.

Of course, the UK Independent was sure to point out that Ireland’s tax policy is “controversial”. And why is it “controversial”? Well… because other countries are tired of seeing their major corporations emigrate to the industrialized world’s lowest tax jurisdiction. Essentially, governments that have called upon tax-exempt EU bureaucrats to “investigate” Ireland’s tax structure (and expressed disdain for Ireland’s competitive tax rate) are engaged in state-sponsored envy. They are institutionalizing greed. After all, the objective of governments should be the protection and encouragement of civilian prosperity… And it seems to me that Ireland is doing a fine job of attracting some much-needed capital.

Now, c’mon Liberals… If a rock star can “get it”, surely you can wrap your brains around this concept as well, right?