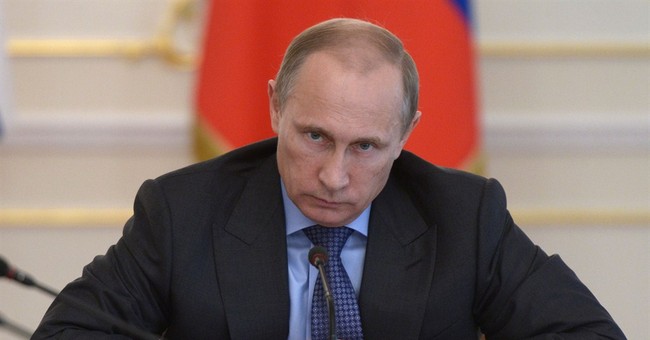 Does anyone else remember when we used to make fun of the Russians? Well… Forbes magazine has named Vladimir Putin as “the most powerful man” in the world. I guess it’s true: dictators and tyrants really do get all the attention.

Of course, it’s kinda hard to argue with Forbes. Vladimir Putin has done a pretty impressive job of pushing around a bunch of weak-kneed liberals (cough*Obama*cough); especially when you consider that he’s the leader of an economy just barely over $2 trillion. (America, by comparison, has an economy of roughly $16 trillion.) Heck, maybe John Boehner should ask Vlad for some pointers.

Barack Obama, by the way, ranked in second place… Not bad for being a weak-kneed liberal who allows himself to get pushed around by the Kremlin’s real-life James Bond Villain. (I can only assume that Forbes did not give credit for time spent on golf courses.) China’s Xi Jinping came in third place; which raised the obvious question: “What’s with all the Communists on this list?” [Insert an Obama-focused joke here.]

Rounding out the top five of Forbes’ list of powerful men, was Pope Francis and Angela Merkel (the word “man” must have been applied rather loosely). At least Obama’s ego can take solace in the fact that he was seen as more powerful than God’s emissary to the Human Race. But it’s still a little less-than-thrilling that the President of the United States was beaten by a former KGB agent who is bent on rebuilding the great Soviet empire.

Unfortunately, it also makes sense. While Obama might have access to a Presidential pen and phone, he’s not the guy who’s rolling T-72 tanks through Eastern Ukraine. While Obama was busy campaigning golfing vacationing playing the president on TV, Putin was busy annexing Crimea, fueling civil war in Ukraine, funding America’s enemies in the Middle East, working closely with the third most powerful man in the world, and buying much nicer Hugo Boss suits than Barry.

"No one would call Vladimir Putin a good guy. In 2014 he strong-armed his way into possession of Crimea and waged an ugly proxy war in neighboring Ukraine, during which an almost certainly Russian-supplied surface-to-air missile downed a civilian jetliner. But as the undisputed, unpredictable and unaccountable head of an energy-rich, nuclear-tipped state, no one would ever call him weak."

This is true. It’s hard to call a guy weak when he goes hunting on horseback, without a shirt. I mean, he’s been photographed cuddling with large carnivorous felines… Obama, by comparison, was photographed wearing “mom jeans” while riding his six speed.

More to the point, Vladimir Putin is the only world “leader” (I use that term loosely… I mean, of course people follow him into battle – he knows how to send people to the gulags) who is really shaping world events. He’s selling guns to Bashir Al Assad, he’s been shuttling American astronauts into space, and he’s pretty much driving Europe into a state of panic over his continued incursion into Ukraine. Heck… With the exception of the Islamic State (which is not totally unrelated to Vlad’s grand-plan for world domination) Putin is the force behind modern world events.

But it’s not as if he’s the most powerful person in the world, simply because of his penchant for starting wars. Unlike the guy that is in second place, Putin has merely refused to lead from behind.