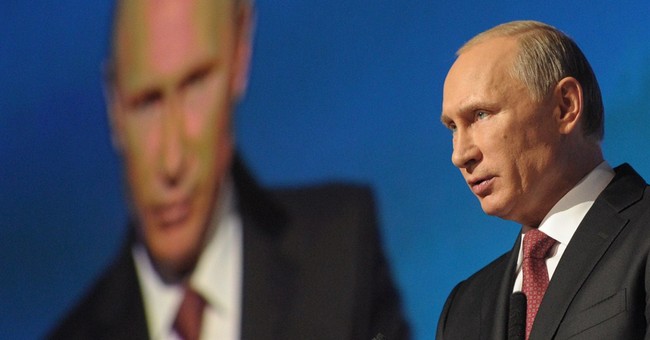 Vladimir Putin is quietly toiling away at reestablishing last century’s utopia-on-earth, known more commonly as the Soviet Union. Aside from rolling some T-72 tanks into Crimea, and giving a helping hand to the Russian separatists in Eastern Ukraine, he’s also been ramping up efforts to remake modern Russia into a more 20th century image. Putin’s Justice Ministry (I’m not sure, but it is possible that they took that agency’s name straight from the pages of a George Orwell book) is trying to shut down one of Russia’s oldest civil rights organizations.

I know, I know, I know... You’re thinking “so what?” I mean heck, the Democrats have been attempting to do something similar to America’s oldest civil rights organization for decades. (Ahem… I’m referring to the NRA, for those of you who didn’t catch that reference.) But this is a bit different. And, on some levels, pretty enlightening.

According to the FreeBeacon:

Russia’s Justice Ministry filed a suit against the Russian Memorial Society, a group established during the latter years of the Soviet Union that has sought to declassify information about Soviet-era political prisoners and provide compensation to them.

This doesn’t tell us a whole lot about the Bond villain known as Putin that we didn’t already know. After all, he once explained the fall of the Soviet empire as the “major geo-political disaster” of the 20th Century. So, yeah… We get it. He feels a little uncomfortable about a civil rights outfit that is dedicated to righting the wrongs of Joseph Stalin’s Mother Russia. But this does tell us a little about how wildly out of touch American Democrats are when it comes to geo-political realities.

Remember that cute little “reset” button Hillary Clinton offered the Kremlin at the beginning of her tenure as Secretary of State? Aside from being mislabeled (seriously: don’t use a free online translation for official purposes), it was given with virtually zero understanding of Russian aggression, designs, or tendencies. After all, how exactly do you “reset” relations with a bunch of Kremlin authorities who pine for the return of the KGB and Soviet style political structures?

Since Putin has retaken the Presidency, he’s been systematically cracking down on civil rights organizations throughout the nation. The US Agency for International Development had to dismantle its Russian program in recent years as Putin’s political opponents increasingly end up in prison, house arrest, or on the run. At the same time, top Kremlin officials have been advising Putin on how the country can “draw inward” for economic prosperity – a proposal that closely resembles the economic isolation of the Soviet Union’s “glory” days.

And yet, the Obama Administration has happily stumbled along for the last six years with an idealistic mentality that a few olive branches and handshakes will bring the Russian Kleptocracy in line with Western values and intentions. So, basically we’re talking about incompetency. Maybe the Obama Administration is so profoundly inept, that they are wildly unaware of the Soviet designs Putin has been executing from his lair deep in Moscow.

At least, that’s one theory… Another, equally plausible option is that Team Obama just doesn’t care. After all, giving a little red “reset” button to a Russian diplomat is hardly what sane people consider “effective” diplomacy with former KGB officials. As Ukrainians are embroiled in a Russian-provoked “civil war”, Obama & Company have been showing reluctance to do much more than some half-hearted (and ineffective) diplomatic-level sanctions. Don’t forget that Obama promised Putin “flexibility” after domestic political obstacles (read: elections) were overcome. Heck, we’re even depending on the Soviet-era relic in Moscow (Putin) to send our astronauts and spy satellites into orbit.

Either the Obama Administration has no idea with whom they are dealing, or they care far more about domestic political gains than international stability. Incompetent, or uninterested, the gaggle of self-interested amateurs in the West Wing seem intellectually under-equipped to grapple with Putin’s Kremlin.

Good thing we have a Nobel Laureate leading this “JV” administration, right?