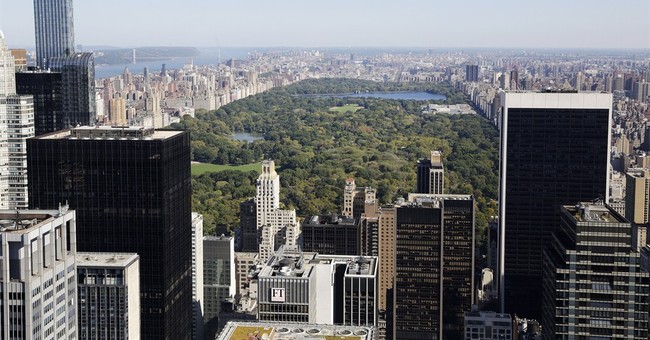 Get ready for a little Public Works oriented socialism in New York City. Bill de Blasio held a press conference Tuesday to announce his renewed dedication to the city’s run-down parks and playgrounds. Well, that’s what it looked like. In reality it was a parade of anti-Bloomberg rhetoric laced with a little class warfare… Now, don’t get me wrong: I’m all for a little Bloomberg bashing – when it’s warranted.

According to Capital New York:

"It’s been decades of disinvestment in our parks. Decades. And again, it did cut along demographic lines,” said de Blasio, echoing the "tale of two cities" rhetoric that accompanied his rise to power.

And Comrade de Blasio wasn’t the only one to tug at the strings of socio-economic discontent:

Melissa Mark-Viverito, the Council speaker who once chaired the parks committee, said Bloomberg's parks policies short-changed poor communities and were "a shame."

Now, I really, really, really, really hate being put in a position where I’m defending the Nannycrat Mike Bloomberg… But, hey: Sometimes we all have to do things we don’t want to do. And, to be fair to the former statist who ruled the island of Manhattan (and its surrounding boroughs), Bloomy did a decent job propping up the area’s parks with public funds. Heck, he added 850 new acres of parkland, and even invested roughly $5 billion to keep the public areas green.

In fact, $80 million of de Blasio’s pledged $130 million plan will be funded by Bloomberg’s last capital budget… So, c’mon… Where’s the issue?

Well, the Comrade who “leads” New York nowadays is a little peeved that some private citizens have been donating money to some parks, and not others. You’ve heard of the “pay gap”? Well, let’s consider this the “parks gap”. And, according to his campaign rhetoric, he plans on fixing that discrepancy with a little old-fashioned Marxism. De Blasio is expected to approach the city council with a plan to take money from private conservancies that fund some of the city’s most famous parks.

Back in the 1980’s, when Central Park was devolving into a wasteland of gang violence and vandalized eyesores, private wealth stepped in to revitalize one of America’s iconic images of the Empire City. The left wing George Soros, in cooperation with the conservative stock broker Dick Gilder, founded the Central Park Conservancy.

Today the Conservancy raises, from private sources, the majority of its $59 million budget, and employs over 90 percent of the park’s staff. And its efforts are evident. In fact, Central Park stands today as what it had historically symbolized: An oasis of tranquility within the Iron Jungle of America’s sleepless city.

And, clearly, that’s not fair.

According to Evan Sparks at the Weekly Standard:

De Blasio has endorsed a plan to raid the assets of the private nonprofit group that runs Central Park. “So for anyone who wants to donate to Central Park, they’re still going to be helping Central Park; most of the money is still going to benefit Central Park,” de Blasio said. “But some of that has to be moved to where the need is greatest, in neighborhood parks that, right now, are really suffering.”

And here we thought the infamous Bond villain, Michael Bloomberg, was a lover of big-government when he banned those dangerous high-capacity sodas; but de Blasio’s insidious proposal to raid private charities for “the greater good” might just trump the elitist Bloomberg’s “holier than thou” style of governance.

Central Park has served as a beacon of free-market philanthropy. The voluntary cooperation between city services and private wealth has revitalized one of the last great city parks in the nation. Through the charity of New Yorkers with disposable wealth, the average city resident can enjoy the benefit of a spectacular civic area. In fact, the Conservancy should stand as undeniable proof that increased tax rates, city tolls, and central planning are no match for voluntary civic duty. The park is not the crown jewel of New York parks because of government – but because of private citizens who choose to be a part of the community.

Of course, it’s often hard to get private donors to do what socialists city leaders want them to do… Which is why de Blasio is making good on his promise to start focusing on “park inequality”. After the press conference, the class-warfare Mayor addressed his long term vision for parks in New York City:

“My thinking is consistent because I believe we have to do a lot to address these inequities and it starts with, of course, the public sector making its commitment, which we’re doing today. As I said, I expect the conservancies to play a major role here. There’s a lot of ways to get that done.”

Yeah… Lenin said the same thing about a class-free society. It pains me to suggest that New Yorkers might miss the authoritarian Bloomberg in a few short years, but that could very well become a reality if the ultra-liberal de Blasio successfully raids private charities in his quest for park and playground socialism.

…On the other hand, at least NYC will have a few new swing sets.