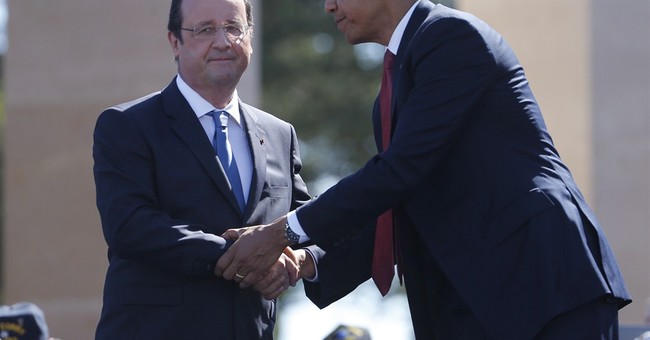 Well, here’s the good news: We’re getting a clearer picture of how the Obama Administration would like to “fundamentally transform” America. And the bad news (you know how the whole “good news” thing works, right?) is that their newly transformed America would look a whole lot more like France. Now, I like a good cigarette and moules marinières as much as the next guy (unless, of course he’s French… then he might like it more) but, I’m not thrilled about living in the socialist-lite version of Europe’s paradise for workers.

While extolling the virtues of government-mandated minimum wage and vacation time, our Président decided it would be good to invoke the French worker as an idol to which Americans should aspire. According to Washington Examiner:

“Other countries know how to do this,” Obama said. “If France can figure this out, we can figure it out.”

Wow. I guess he’s seen the future; and the future works. Of course, the truth is a little less glamorous (and a little less snarky). It goes without saying that Americans can do anything that the French can do – and heck, we can probably even do it better.

But, really, do we want to compete with the French over who can be more socialist? I mean, they’ve had a lot more practice than we have. And, the truth is, France has been (economically speaking) a little bit of a let-down nowadays. For starters, our GDP is about six times that of France, despite the fact that our tax revenues barely double that of the socialist nation. Also, France just saw another GDP contraction (that’s a officially a “recession”), its unemployment rate has been hovering around 10 percent for two years, and there has been an exodus of wealthy entrepreneurs and philanthropists who have decided to scour the earth for a more economically inviting business climate.

In other words: The “worker’s paradise” of France is on the road to being the Detroit of Europe.

Besides, there are some pretty fundamental differences between American business expectations and those of European socialist states. Even Cadillac (ya know: the luxury line of Government Motors) understands that there is a foundational difference between good-old-fashioned Americanism and the paradise of François Hollande. (Seriously, check this article out… It will make you thrilled to be a hard working American.)

France currently has some of the most “generous” labor requirements in the (non-bankrupt) civilized world. Full time employment is considered a mere 35 hour work-week; women receive 16 weeks of paid maternity leave; it’s almost easier to fire a Chicago teacher than an incompetent French employee; and they pretty much get the month of August off for holiday. Sounds great, right?

Of course, maybe we should think about how much productivity would suffer if worker’s hours were cut to meet the French-approved standards of the White House. Maybe our socialist-sympathizing comrades in DC don’t get it, but productivity actually does translate into prosperity. And prosperity tends to make the lives of the disadvantaged slightly more comfortable. After all, productivity tends to create all that wealth that socialists like to “spread around”.

Here’s the dirty little secret that our Président fails to understand: Worker benefits are not free… In fact, they cost a lot of money. And this price tag is not the burden of the employer, but the burden of consumers, employees, and productivity.

Then again, the Président wasn’t trying to craft a proposal that would actually put people to work, or solve America’s economic woes. He was merely pandering to the working class liberals that constitute his base of support.

Sure, French workers might get a month of vacation and enjoy daily two hour lunch breaks; but Americans can get more done by noon on Tuesday than half the nation of France can get done in a week. What Obama seems unable to comprehend is that the Socialist model for “worker’s rights” comes at a cost… And that cost is paid through higher prices, increased taxes, and an increasingly underperforming labor force.

And, if you don’t believe me, just look at Detroit. The French would have been proud of the UAW’s business demands… Of course, France is now slipping into an economic slump that closely resembles the crumbling ruins of motor city.

Besides, if we only worked 35 hours per week, I probably wouldn’t have had time to make fun of the French today. And, really, is that the kind of world in which we wish to live? N’est-ce pas?