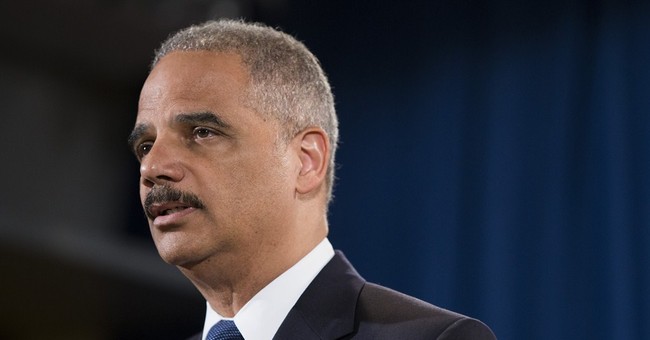 The nation’s top extortion artist, Eric Holder, is at it again (or still). This time, rather than running guns to Mexican drug cartels or investigating reporters who publish inconvenient facts about the administration’s scandals, Holder is taking aim at America’s small businesses. While Holder and Co have been busy collecting billion dollar fines from big banks, they’ve taken a more direct approach to snub out businesses that don’t necessarily conform with the Holder/Obama view of America.

Operation Choke Point, as it has been known, was a DOJ initiative that was intentionally designed to pressure banks and lenders into avoiding certain industry-specific businesses. Ostensibly, Operation Choke Point was designed to fight money laundering and fraud. The secretive initiative was launched with little fanfare in 2013. According to the Justice Department, it was aimed at “choking out” companies the Administration considered high-risk, despite the fact that they were legal businesses that had shown no signs of fraud.

In other words, the program was aimed at punishing businesses for merely existing. One of the primary victims of Operation Chokepoint has been gun manufacturers, and legal firearm dealers. (What a shock… I’m sure that’s completely coincidental.)

So, while Eric Holder was busy shaking down banks for billions of dollars on trumped up charges, his department was also intentionally harassing legal businesses such as gun dealers, payday lenders, and anyone else that earned the scorn of the Obama Administration.

The DOJ has acknowledged that their tactics have resulted in many businesses being unduly punished, but brushed off any concerns by saying that legitimate businesses will merely have to make additional efforts to “prove to banks they are not engaged in fraud.” Because, yeah… That’s clearly how our system is supposed to work, right? I mean, sure, we could try to use the DOJ to target people that have actually broken laws, but that would require a little less Chicago-style corruption.

Lucky for us, a handful of Republicans in California (yeah… there are still some Republicans left in that state) elected Darrel Issa to the US House of Representatives. Issa, who chairs the Oversight committee, has chosen to take Holder to task for his latest affront to American style government, by claiming that the DOJ’s actions are flagrantly illegal.

And, of course, Issa’s right… But it’s actually worse than that. Holder’s actions are also un-American. More than being corrupt, political, or criminal, Eric Holder’s repeated use of thuggary and intimidation are fundamentally antithetical to the American form of government. But, he’s not alone in his un-American wielding of federal power. There is a growing sense among the ruling elite, that government is a tool to keep the citizens in line. The IRS is more than a revenue collection agency, it is (apparently) a tool to silence and harass political opponents. The DOJ isn’t merely a law enforcement agency, but an agency with the power to manipulate and intimidate the public into compliance with certain world views.

When (a) government is gleefully wielding its power to harass, bully or intimidate the populace into submission, things have gone off the track somewhere. I guess this is the “Hope and Change” that America voted for in 2008: A world where the government runs extortion schemes and protection rackets while bullying industries they don’t like. Who knew that liberal utopia looked so much like Chicago?