Forget About the Fed – Let’s End Liberalism Instead 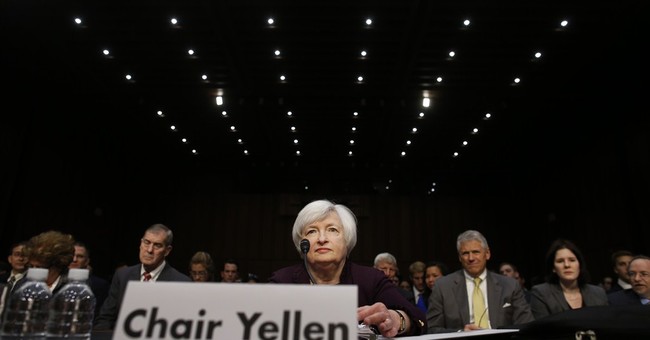 Yeah, this economic recovery is pretty abysmal. And no matter how bad it might seem, it’s actually a little bit worse. Last week we learned that GDP actually showed a contraction in the first quarter of 2014. Pundits and politicos blamed the weather (because nobody was expecting snow in January and February), but in reality the numbers demonstrated that the prediction for an economic breakout was little more than propaganda.

Most economists, pundits, and investors have started to view these numbers through the political prism of Federal Reserve Policy (which I contend is actually more akin to a kaleidoscope); but the Fed might not actually matter that much anymore… Don’t get me wrong: I’m all for the idea of putting Janet Yellen out of work, I just don’t think such a move will suddenly create millions of jobs and bring prosperity back to the American economy.

Despite the fact that the Federal Reserve has been pumping trillions of dollars into the economy with their Quantitative Easing program, our nation has seen anemic economic growth. In real dollars, the Fed (mostly under the leadership of Ben “easy money” Bernanke) has injected about $2 trillion into financial markets. This money (according to people who read Keynes as if he penned the economic gospel) was supposed to increase liquidity in the system and multiply, thereby creating jobs and prosperity. According to the theory of that guy who once said “we’re all dead in the long run”, the free Fed cash was supposed to result in massive job creation, and intense credit growth…

Overpriced homes, new cars, and standard 9-5 jobs for everyone!

Of course, this hasn’t happened. In fact, despite the $2 trillion of “free” Fed monies, our ailing economy only managed to grow about $1.1 trillion in that same time span… So, to be clear: The Fed printed up $2 trillion worth of cash, and handed it to Wall Street. Stocks climbed steadily, and the economy only grew by half as much as the Fed had printed… This is apparently what happens when Liberals run the government.

Which brings us to the main point (I know, I know… “Finally”, right?):

Sure… End the Fed. But before we tackle that challenge, maybe we should end the reign of Obamanomics? After all, it seems that the Federal Reserve has pretty much exhausted every trick in the book to inflate the economy, and the economy still isn’t growing. Go ahead and give Wall Street more Fed dollars, but it’s a pretty big chore to get the economy going when policies from DC are killing jobs, and Eric Holder is making a killing out of suing banks.

Our biggest problems, today, aren’t monetary. They’re fiscal. The real problem with today’s “recovery” isn’t a lack of money or consumer demand… The real problem seems to be the guy living at 1600 Pennsylvania Avenue, and most of the 535 “leaders” who help craft fiscal policy at the US Capitol.

All the free Fed money in the world won’t change the fact that Eric Holder is suing banks left and right, while his Consumer Financial Protection Bureau is making mortgages a nightmare for the average lender. Barack Obama’s FDA isn’t exactly making energy any more affordable, and Obamacare is basically giving businesses a very legitimate reason not to hire people. Besides, if we truly live in a consumer-driven economy, it seems like the biggest thing we’re missing in this “recovery” is job creation.

So while the Federal Reserve has pumped trillions of dollars into the markets, the US economy has limped along. The fact that trillions in “free money” has been so ineffective at priming economic growth should tell us something: Lack of capital is not the issue.

Unreasonably loose monetary policy is no substitute for a congressional budget, or an informed fiscal policy. America is ready for an explosion of economic prosperity; but as long as the government continues to tax, regulate (oh good… more carbon regulations are being announced today), and infringe on the sovereignty of business, things are unlikely to get much better.

Whatever possible benefit the Federal Reserve could have had on the economy has been largely offset by the disastrous Obama policies of regulation and micromanagement. The truth is, the economy can only handle so much progressivism before it collapses under the weight of bureaucrats. So while I’m completely in favor of “ending the Fed”, the long run can wait. The real solution to today’s economic woes can be found at the ballot box this November.