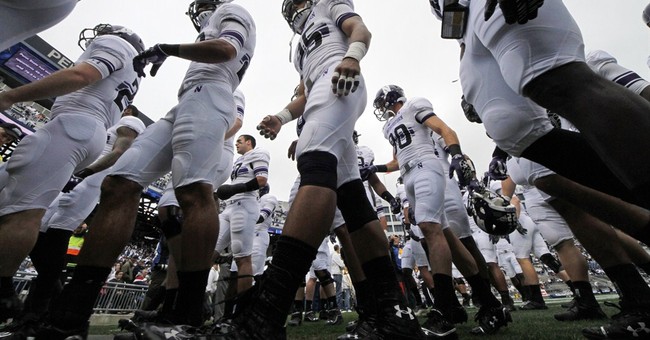 The National Labor Relations Board in Chicago has decided that college athletes – who are getting a subsidized education and a shot at a multi-million dollar career – have the right to unionize as employees. The Labor backed effort to unionize college students who play games as an “education”, according to the Chicago NLRB, now have a seat at the “bargaining table” in college athletics… Because, obviously, consumers of higher education (AKA: “students”) don’t currently have any seat at the “bargaining table”.

The short story is that pockets of education consumers (which is the technical definition for individuals who voluntarily elect to attend private or public universities… ya know: “students”) who engage in sporting events feel they should have the same powers as, say, autoworkers. And now, the Labor Board has given the green-light to turning college sports into the athletic equivalent of General Motors… This will turn out great (just ask Detroit).

The board's decision indicates that there was enough evidence presented that the athletes are employees of (Northwestern University) -- getting paid in the form of scholarships, working between 20 and 50 hours per week and generating millions of dollars for their institutions.

So… Good news to all those MIT students, and doctoral candidates who generate millions of dollars in government funding for their universities: You can now unionize as well! … Apparently dedicating yourself to university activities for an arbitrary number of hours per week, and being “compensated” with scholarship opportunities, qualifies you as an “employee” capable of unionizing your peers. According to the NLRB, an “employee” is regarded as someone who operates under the direct control of a manager while being compensated for their work. Athletes fit that definition, according to their union friendly hacks in Chicago, because they are “compensated” with scholarships and are managed by coaches and university staff.

Strangely, the NLRB gave no ruling on medical students, or other scholarship recipients… But, I guess that’s because the National Spelling Bee doesn’t generate the same level of interest as a college football bowl game.

There are, quite obviously, two sides to this story. One side deals primarily with the union thugs that helped fund the legal effort to recognize students as “employees” capable of unionizing… The other side of the story, is a group of students who feel that a free education and the opportunity to play a game (that may net billions of dollars in professional wages after graduation) isn’t good enough for their entitled sense of self-worth.

Students, primarily guided by the Labor-backed Northwestern quarterback Kain Colter, have been fighting for larger scholarships (because paying for education is “so 20th century”), and the possibility of wages (because opportunity is good enough for aspiring teachers, doctors, and engineers… but not football players). Naturally, seeing an opportunity to capitalize on impressionable due-paying Democrat-funding members, Labor Unions rushed to back Colter’s legal fight. (Maybe we should allow little leagues to unionize… After all, little league football is big fundraising for many rural school districts.)

The main issue – as is evidenced by the NLRB’s refusal to acknowledge interning students and other scholarship recipients as “employees” – seems to be that athletics raise quite a bit of money for universities. And, apparently, it is “unfair” that these college students don’t see any direct dividends from that revenue (assuming you ignore their scholarships, classrooms, training equipment, and life experience).

This means that, in the end, the decision leaves Northwestern University with only two practical options outside of appeal: They could stop raising revenue off of their excellent competitive sport programs; or they could begin paying their students…

Of course, a lack of revenue will quickly bring an end to their sports program, and therefore leave numerous students with no opportunity for higher education. Likewise, considering students as employees will quickly result in diminishing scholarships, and fewer educational opportunities for “athletic employees” (such as business classes, sports-medicine, or financial planning)… College sports will, essentially, devolve into a minor league football circuit that raises roughly the same revenue as competitive Ping-Pong tournaments.

Unions, the American Left, and the National Labor Relations Board, have once again done what they do best: They have plundered and pillaged institutions that dare to provide a service or good while making a profit… And they have done it all in the name of enlisting a few more due-paying members for Labor Unions.