Pelosi on Government Spending: We Have Nothing Left To Cut 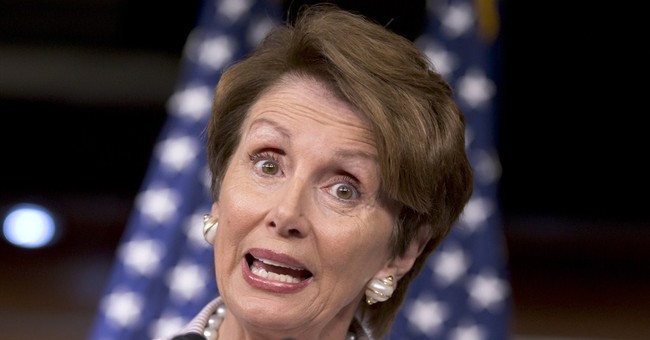 Congratulations Obama, Pelosi, and the Democrat Senate. . . We now have the most efficient government in the history of governments. Not a single dime has been wasted, not a single dollar misspent, and not a single entitlement promised imprudently. At least, that’s the message the former speaker of the House, Nancy Pelosi (D- Republic of California), conveyed to Candy Crowley in a recent interview.

When asked about President Obama’s inexplicable refusal to negotiate a deficit reduction deal in exchange for an increase in the National Credit Limit, Pelosi said the problem is there is nothing left to cut:

So, the President’s non-negotiable obstinacy on the debt ceiling is actually rooted in fiscal reality. Apparently, according to the brightest mind that San Francisco Democrats have to offer, we’re out of trim-able expenses in the Federal budget.

A first for governments around the world.

And, really, Pelosi’s comments make perfect sense. It’s only logical that government spends a million dollars to study the “sexual attractiveness” of fruit flies. It’s only prudent that government pay out $2 billion to farmers for not farming land. And, of course, it is only logical that the government shell out $500 million on a program that would, among other things, try to figure out why five-year-olds “can’t sit still” in a kindergarten classroom. (Um. . . Because they’re five. Can I have my $500 million now?)

And yes. . . Those are all real government expenses. Furthermore, according to Pelosi, they are part of government’s current fiscal restraint.

The Congresswoman’s ridiculous claim that the government cupboard is bare, is like saying that Warren Buffet is on the verge of poverty. Aside from the millions in wasted funds, redundant programs, and ill-advised government expenditures, we have the capability of reducing future payments by reforming various entitlement programs.

The truth is Government is far from running on the skinny. But even if we are to ignore the misspent dollars of today, it is either congressional malpractice or national suicide to ignore the mounting debts of tomorrow. Both the President, and government loving Keynesians like Pelosi have suggested that raising the debt ceiling is merely a matter of meeting the financial obligations we have already put in place. If this is true, we should look at the largest future expenditure of government funds: entitlement programs.

With over $100 trillion in future (unfunded) liabilities, only a public servant that is comically divorced from reality would suggest that “there are no more cuts to make.” Especially when the nation prepares for the implementation of, yet another, multi-trillion-dollar government dependency program – Obamacare.

While it has been repeatedly proven that politicians – as a group – are largely incapable of making meaningful reforms to existing entitlement programs, we are now looking at an opportunity for government to at least slow the growth of another expensive handout. And for that reason, a growing number of GOP members in the House have decided to request the defunding of Obamacare in exchange for an increase in the national debt.

And while such a request may, or may not, be achievable, the practice of negotiating a fiscal policy is by no stretch of the imagination impractical, because of any existing fiscal restraint. After all, the last five years of government spending have been largely modeled after the spending trajectory of 2009, when President Obama signed almost a trillion dollars of “stimulus” spending into law.

Many people may feel tempted to roll their eyes, and brush Pelosi’s comments off as an idiotic statement made by a big-government Liberal in California. But it is, regrettably, more than that: Her comments underline a deep belief in the Democrat party, that there really is no problem. Government spending to people like Pelosi is some foreign concept that is only articulated on paper – and has no reflection or impact in the real-world. And, more importantly, her comments should not be dismissed because they were spoken by someone elected to office and given command over our hard earned tax dollars.

Her comment that government is running at peak efficiency, without room for reform or further fiscal restraint, is merely the sum of her divorce from reality and her inadequate grasp on coherent thought. I shudder to think that our deliberative bodies in government are populated by such oblivious ideologues.

Crowley’s reaction to Pelosi’s baffling response should have been something similar to this: