Birthright Citizenship Is Wrong for America

Michael Reagan
|
Posted: Nov 03, 2018 12:01 AM
Share   Tweet
The opinions expressed by columnists are their own and do not necessarily represent the views of Townhall.com. 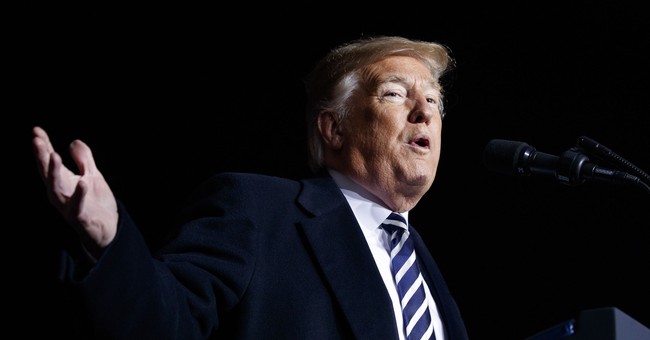 The president rolled another flash grenade onto our political stage this week, and it sent the Trump Hate Media into a predictable tizzy.

Trump was called a racist - for the umpteenth time - because he said he plans to use an executive order to put an end to birthright citizenship.

Birthright citizenship, made possible by the 14th Amendment, is the automatic granting of U.S. citizenship to any Mexican, Chinese, Russian, Kenyan or Martian baby who is born on American soil.

I made up the Martian part, though it's probably true.

But thanks to a relatively recent and very liberal misinterpretation of the 14th Amendment, even though the baby's parents are non-citizens, if they are born in America they get full U.S. citizenship.

For the rest of their lives these so-called "anchor babies" are given the right to live and work in the United States and collect benefits, just like anyone born in Beverly Hills.

Even better for the lucky foreign babies, when they turn 21 they can start applying for green cards to bring in their mothers, fathers, siblings, grandparents and Facebook friends to America.

But it sounds like something President Trump might say when he is arguing that anchor babies need to be outlawed because they create the "chain migration" that allows extended family members from foreign lands to end up living in the U.S..

Not that you learned it in high school, but the 14th Amendment, known as one of the Reconstruction Amendments, was passed after the Civil War in 1868.

Not that you learned it in college, but the 14th Amendment was specifically written to grant full citizenship rights to all former slaves and their children and to prevent the states from writing new laws depriving them of those rights (which, shamefully, the Southern states did when they passed their racist Jim Crow laws in the late 1800s).

Not that you learned it from the media, but the 14th Amendment was never intended to automatically award U.S. citizenship to the babies of foreign parents who happen to be here when their child was born.

It certainly wasn't meant to create the "birth tourism" business, which is run by Russian and Chinese companies that make it possible for wealthy foreigners to visit the United States for a month or two so their newborns arrive on our soil.

It was reckless of President Trump to throw out his "anchor baby" grenade a week before the important midterm elections.

It only gave the Trump Hate Media and Democrats another chance to bash, blame and mock the president.

The media never tried to explain how something written to protect slaves 150 years ago had morphed into an open legal door for birthright citizenship.

The liberal media never got around to talking about how the "birthright clause" has created the growth of a birth tourism industry.

And President Trump's media enemies sure didn't remind us that before the Democrats were against getting rid of anchor babies, they were in favor of getting rid of them.

We badly need immigration reform that is smart for America, not harmful.

I hope Trump can win his latest battle.

Ultimately it's going to be up to the U.S. Supreme Court to decide whether birthright citizenship for foreign nationals as we've known it for decades can be ended with a few strokes of his executive pen.

But there's little doubt that birthright citizenship is wrong for the United States. So are anchor babies.

It's time for us to fix the constitutional loophole that created them. It's also time for our schools to do a better job of teaching American history.